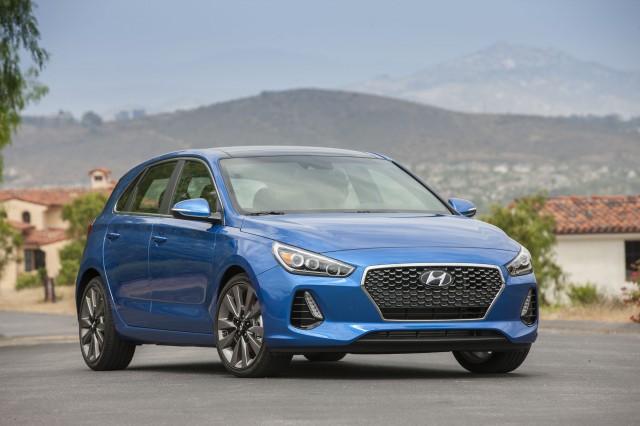 As the more dapper and international of the automaker's two compact cars, the 2018 Hyundai Elantra GT speaks many languages. It wears a crisply tailored European suit not unlike the car that's in its sights: the Volkswagen GTI

It mostly succeeds in imitating, but not besting, that German stalwart at its own game.

But first, a little background should you find yourself scratching your head in a Hyundai showroom. The latest Elantra sedan that's been on sale for a year now is largely an American-market product. It was designed for us and mostly by us, and it's even built here. Add the letters G and T to get Elantra GT and you get more than gin and tonic. The Elantra GT is actually a Hyundai i30 with a name change; a five-door hatchback built in South Korea, developed in Germany, and intended primarily for the European market.

MORE: Read our review of the entire Hyundai Elantra range

What's that mean? The Elantra GT has its own interior design and its own suspension setup, both of which are superior to the sedan. Why? European shoppers don't equate luxury with large cars the same way that consumers in most other markets do. The Golf pioneered and has nearly perfected this concept of compacted luxury.

Hyundai's not the first brand to take on the Golf, but it is one of few to let Americans sample the fruits of its global labors. We had our first go in one recently in sunny San Diego. 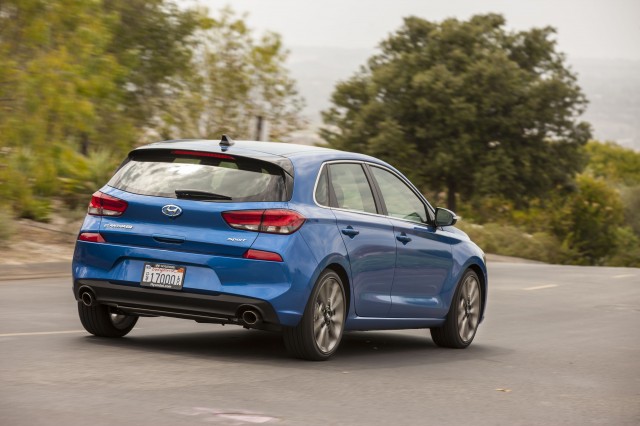 The standard Elantra GT features a 162-horsepower, naturally-aspirated 2.0-liter inline-4; we've not yet driven it. Instead, we had the opportunity to put the Elantra GT Sport, with its 1.6-liter, 201-hp, 195 pound-feet of torque turbo-4 through its paces. The GT Sport is going to be the one you'll want if you relish driving. It swaps out the standard Elantra GT's low-tech torsion-beam rear suspension for a more upmarket mutli-link setup, and its feisty turbo engine can be paired to either a 6-speed manual or a 7-speed dual-clutch automatic.

You'll find the same powertrain in the Kia Soul Turbo, but the Elantra GT Sport's more sophisticated underpinnings make all the difference. Where the Soul is basically a Kia Rio with a quirky body, the Elantra GT Sport is more like a downsized premium car. Light, but accurate steering helps it slice through corners. Aiding matters is its stiff body that helps it feel positively Teutonic over big bumps. Only some wallow on undulating pavement prevented it from feeling positively buttoned-down. At around 3,100 pounds, the Elantra GT Sport is fairly light, but it rides and handles like a heavier, more planted vehicle. That's not an insult—it corners more like a downsized luxury car than a light-on-its-feet sports car, however.

On the other hand, its willing little 4-cylinder engine provided eager acceleration. It probably won't win a drag race against the more powerful GTI, but the Elantra GT Sport felt zippy with excellent mid-range torque and the 7-speed dual-clutch transmission in our tester was remarkably well-behaved. We recently spent some time in a Soul Turbo with this same setup and came away unimpressed with ever-present torque steer and occasional low-speed stumbling from the transmission. The Elantra GT Sport's more balanced chassis eradicates that pulling under acceleration. Perhaps it was a ringer, but our tester's transmission nearly convinced us it had a torque converter—at least until we tapped its steering wheel-mounted paddle shifters. The gearbox slices through its ratios, sending the tachometer needle flying toward redline when downshifted.

Little of the buzziness we've sometimes encountered with this little inline-4 was present in our hushed test car. If anything, it's too quiet and too refined, feeling more like a sedate alternative to the GTI. Then again, the GTI is less-than-manic by design, which makes the Elantra GT Sport feel perhaps too suave for its own good.

We've not yet driven an Elantra GT with the standard 6-speed manual.

The Elantra GT's interior features a big 8.0-inch screen festooned prominently to the center of its dashboard. Flanked by buttons, the screen is bright and crisp, but its placement feels more like an afterthought than it should. Below, audio and climate controls are arrayed logically. Materials throughout are a clear step above the Elantra sedan, which features an interior that looks similar enough at first glance but reveals its differences quickly. Elantra GTs have sports seats wrapped in cloth or leather trim that could easily have been plucked from a new GTI. They're firm and supportive with just the right amount of bolstering. 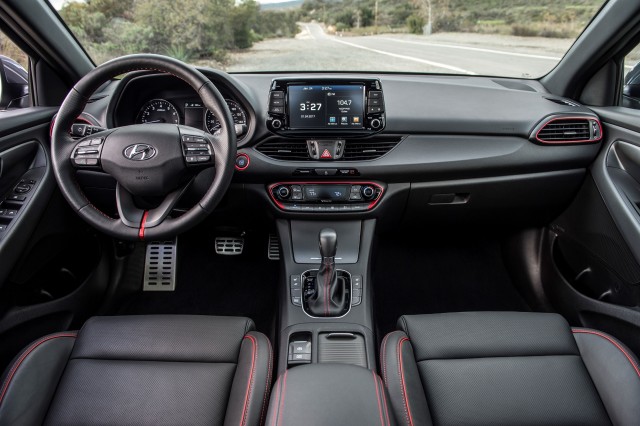 Rear seat space is about par for the compact hatchback class. Cargo room is well above average, especially with the split-fold rear seatbacks dropped down. What was nearly 25 cubic feet balloons to more than 55 cubes.

Aside from their different engines and suspensions, the GT Sport adds to the standard model 18-inch (in place of 17-inch) alloy wheels, blind spot monitors, keyless ignition, a leather-wrapped steering wheel, LED headlights, and leather upholstery. Most of those features are available on the Elantra GT, but only the GT Sport offers big safety tech as an option—automatic emergency braking, adaptive cruise control, lane departure warnings, and lane keep assist.

Hyundai hasn't yet announced pricing for the Elantra GT lineup, but the automaker suggested that its new five-door will undercut the GTI (which starts around $26,500). It needs to be cheaper because, frankly, it's not quite as good. But it's darn close—closer than anyone has ever come to replicating the GTI's magic.