As useful as pickup trucks are, there's one place they don't make much sense: in the city, where urban confines make long, unwieldy cargo haulers challenging to maneuver into tight spaces.

ZF's test setup isn't ready for production just yet, but the supplier hopes that an automaker like Ford—or, really, anyone who builds large trucks and SUVs—may bite.

Even though the F-150 is a fully home-grown product and the rear-wheel steering system is actually the brainchild of a ZF team in Michigan, we traveled to where pickups are a tough sell to test out the system. On a tight, orange cone-lined obstacle course near Vienna, Austria, we first drove the F-150 with the rear-wheel steering system turned off. Predictably, the truck was cumbersome and required multi-point turns to squeeze into what ZF said was an average-size European parking spot.

With the system engaged, however, the F-150 was transformed. At full steering lock, the rear wheels turn more than 12 degrees in the opposite direction of the fronts. As a result, it sliced its way through the short course with ease. What's more, the only thing the driver notices is the impressive maneuverability. There's no adverse affect on the F-150's electric steering system. 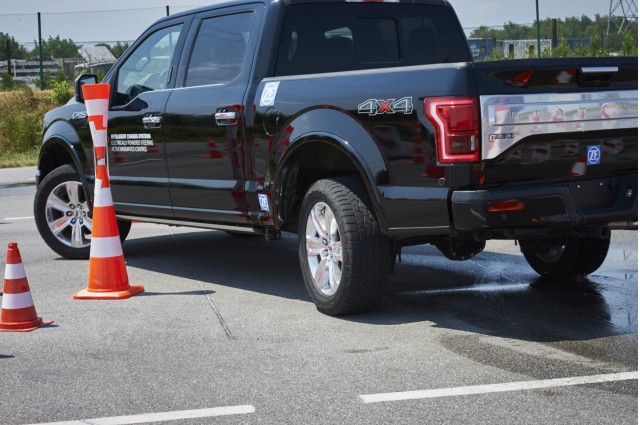 This isn't the first time that someone has dabbled in rear-wheel steering on a pickup, but things are a little different today. More than a decade ago, General Motors offered an expensive system it marketed as Quadrasteer on certain versions of its Chevrolet Silverado and GMC Sierra pickups, as well as its full-size SUVs. At $5,600, Quadrasteer added more than 10 percent to the list price to an already expensive pickup.

Predictably, the Delphi-developed system was a slow seller, even after GM sliced the option's price in subsequent years.

DON'T MISS: Do you really need a three-row vehicle?

But several ingredients make ZF's system far more compelling—and, the supplier says, a lot cheaper and more reliable to produce. For starters, the F-150's steering system is now electric, rather than hydraulic like pickups of the past, which allows ZF to easily tune out any funkiness out back.

The system's big advantage is that it starts with ZF's proven Active Kinematics Control, a rear-wheel steering system developed initially for sports cars to help improve high-speed stability and aggressive corner carving. After being proven in cars like the Porsche Panamera, Active Kinematics Control was adapted for use in the F-150 to show off a more practical solution.

But ZF hasn't forgotten about the past; the firm's Michigan-based engineers actually used some basic suspension hardware like steering knuckles from old Quadrasteer trucks to make Active Kinematics Control work with the F-150's simple live rear axle. What's old is new again, apparently—but this time, we hope that rear-wheel steering catches on.