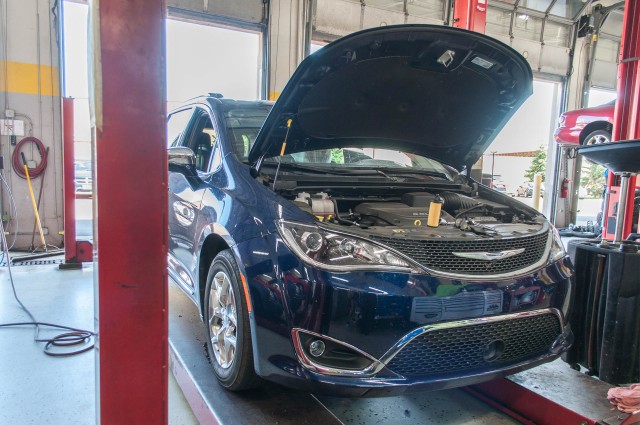 Summer is officially here, which means we are about a quarter of the way through our time with our blue long-term 2017 Chrysler Pacifica.

The miles are piling on between cross-country road trips, family weekends at the cabin, and hauling car parts. Just after hitting 9,400 miles in about three months, our Pacifica's on-board trip computer finally decided it was time for a checkup at the dealership.

From an oil change and tire rotation to a software update on the Uconnect infotainment system, here's what our first service stop experience included. 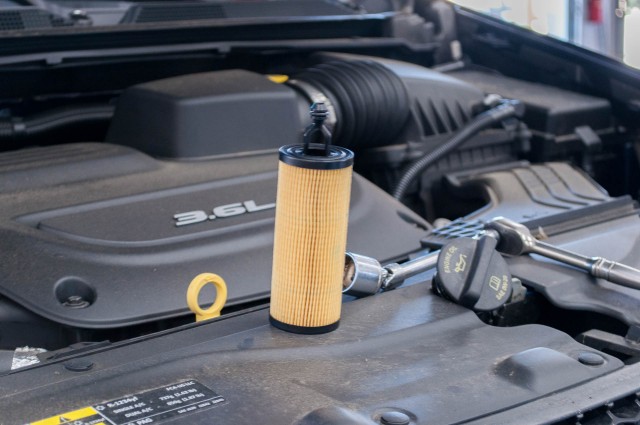 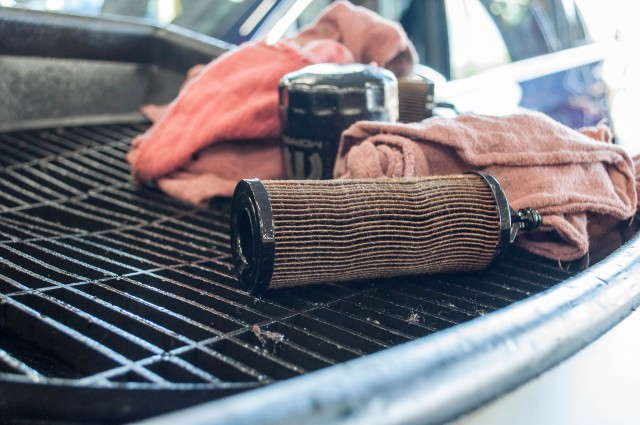 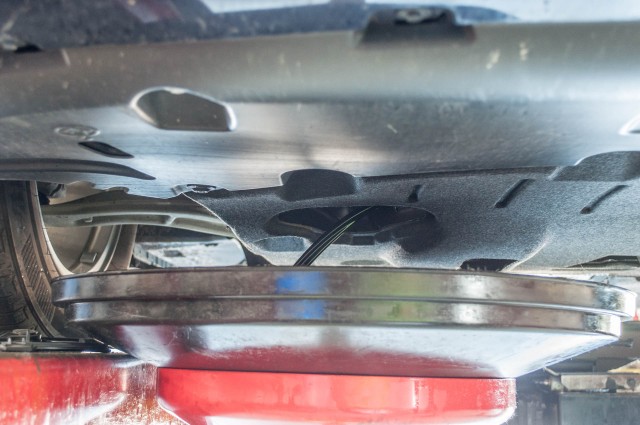 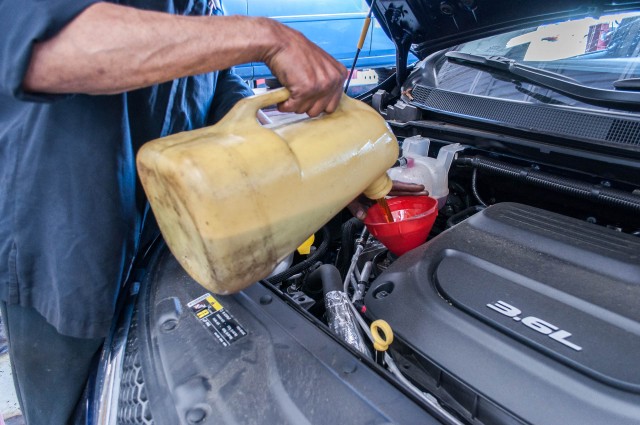 We talked about how automakers are calling for longer and longer oil change intervals with our long-term 2016 Honda Pilot, and our long-term 2017 Chrysler Pacifica is no different. When we pulled into the dealership for our first service stop the odometer read 10,200. That seems crazy, right?

The 2017 Chrysler Pacifica's owners manual states that the on-board oil change indicator will let you know when it's time to take your vehicle in for service. More importantly, it notes that "under no circumstances should the oil change intervals exceed 10,000 miles, twelve months or 350 hours of engine run time, whichever comes first."

Since most of our mileage has been cruising on the great highways and byways of this vast country, it makes sense the on-board trip computer decided the Pacifica didn't need an oil change until it hit the mileage cap.

Scheduling a service at our local FCA dealership couldn't have been easier. We simply called and were asked when we would like to schedule an appointment. Upon arriving at the actual dealership we were greeted immediately by a friendly service advisor who pointed us in the direction of our scheduled advisor, Brandon.

After confirming with Brandon the information pertaining to our vehicle, we agreed based on the mileage it needed an oil change, tire rotation, and he let us know that a software update for our Uconnect infotainment system was available.

We signed off on the work to be performed and were shown to the customer waiting room where we found a business center, coffee machine, warm, fresh popcorn, television, and even a kids area with plenty of books and toys. For minivan owners, a trip to the dealership with the whole family needn't be a painful experience, it turns out. 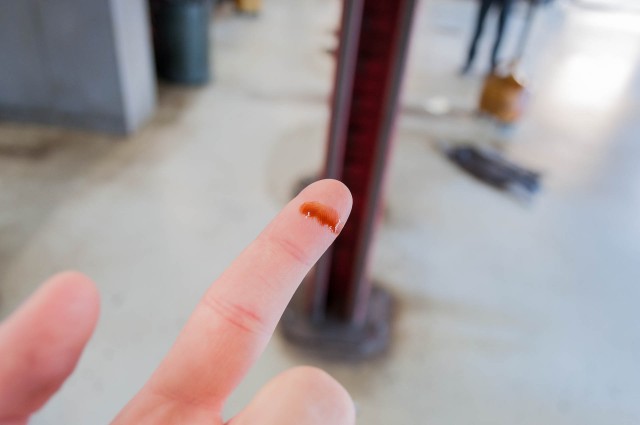 Our service technician, Lamont, wasted no time in pulling our Pacifica back onto a rack and immediately began to change the oil. Despite the fact that our long-term Pacifica had essentially driven enough miles to make it from New York City to Los Angeles and back nearly two times, the oil itself was quite clean, as was the filter. There was no metal shavings or visibly concerning elements.

After draining all the oil and installing a new oil filter, Lamont poured 5.5 quarts of 0W20 synthetic oil into the Pacifica's 3.6-liter V-6 engine.

While not required for another 10,000 miles, and not on our service order, Lamont went ahead and checked the condition of the cabin air filter. The results? All things considered, it looked nearly new.

When it comes to tires, your mileage may very, but rotating them along the way will absolutely help you get the most life out of that rubber. While we typically like to rotate our tires every 6,000 miles, the Pacifica didn't go in for service until 10,000. Despite the extra mileage, the tires looked to be wearing evenly with no premature wear spots noted.

When asked if a balance was necessary the dealership told us only if a customer specifically asks for one or notes a vibration at speed. We didn't ask nor did we have a reason given there was no vibration. 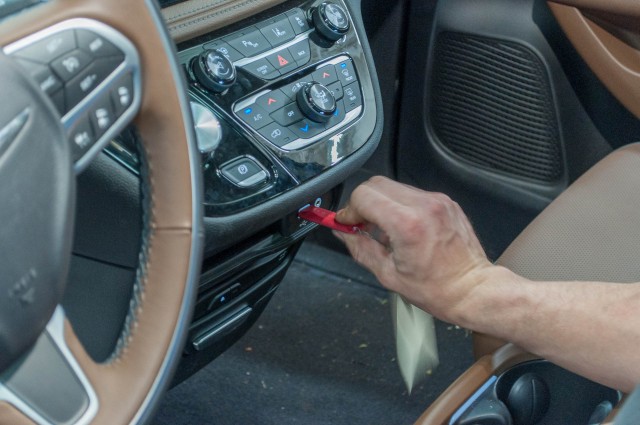 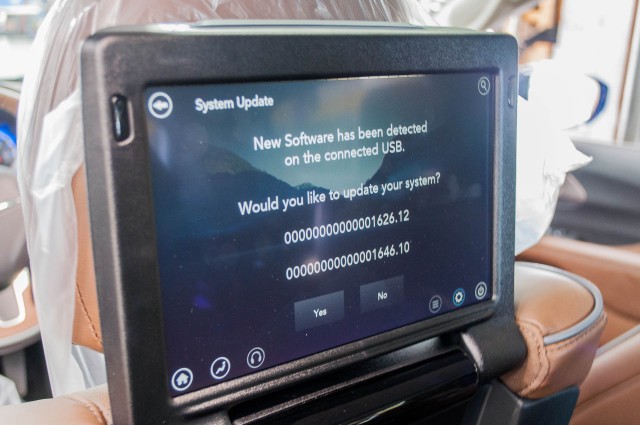 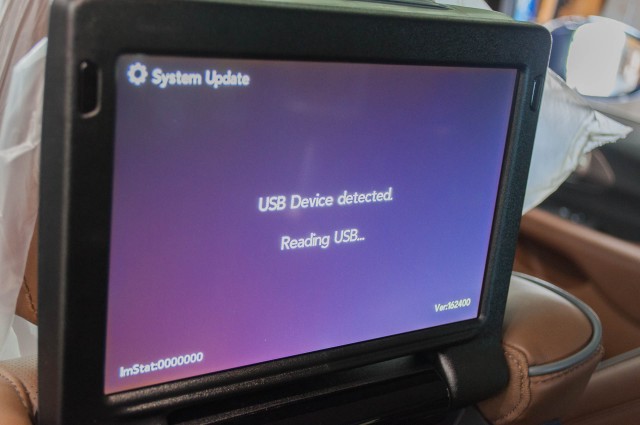 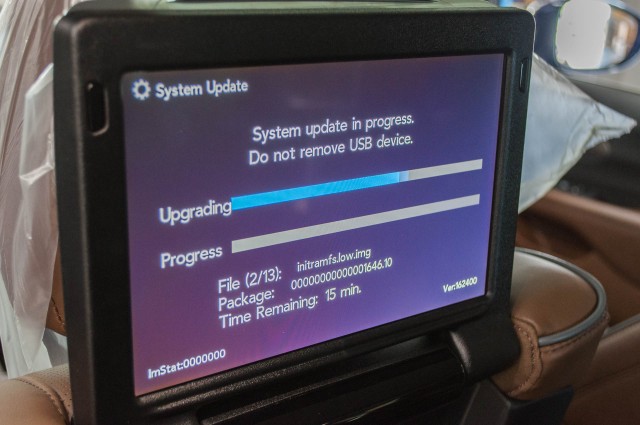 Brandon checked FCA's data base and confirmed that there was a software update for our long-term Pacifica's Uconnect infotainment system.

After the oil was changed and the tires were rotated our Pacifica was handed off to a technician named Cody to perform the software update. What used to be a pricey new CD or SD card full of updates is now done via a flash drive at the dealership. The technician simply downloaded the latest update and plugged a drive into our Pacifica's USB port. The rest? It's a mere tap of an accept command and then some waiting. The system automatically reads and downloads the latest software automatically.

Why did our Uconnect system need an update? According to Cody, "it's a bug fix. Some customers were experiencing Bluetooth connection issues where the vehicle would drop the connection to their phone's Bluetooth and the only way to reconnect was to restart the vehicle."

Not even lunch, and certainly not a service stop at the dealership. Of course our Pacifica is under warranty, and while the Uconnect's software upgrade was free, the rest of the service wasn't.

The oil change ran us $65.47, and the tire rotation added another $23.98, add in a few miscellaneous environmental and hazardous disposal costs along with tax and the grand total was $100.51. 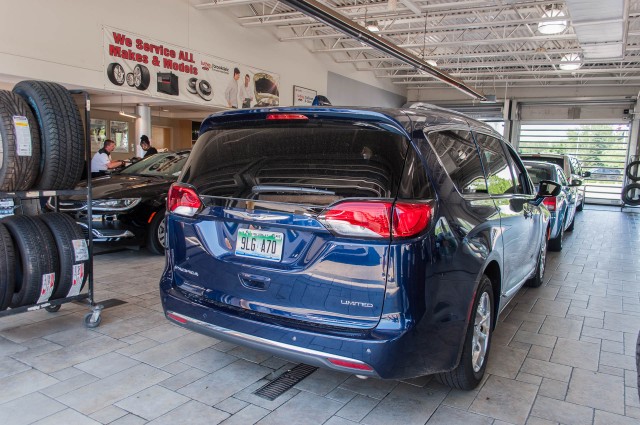 What's next for our Pacifica?

The Pacifica's now in the Midwest enjoying a few summer months as a family truckster. From hauling kids in car seats, the dog, and luggage up north for the weekend to Costco runs and lugging a pressure washer home, it's being put to work.

We'll be continuing to track our fuel economy and will bring you another update shortly. Stay tuned for a full report on the built-in vacuum setup, along with a closer look at the safety systems, and see what exactly we can fit inside along the way.