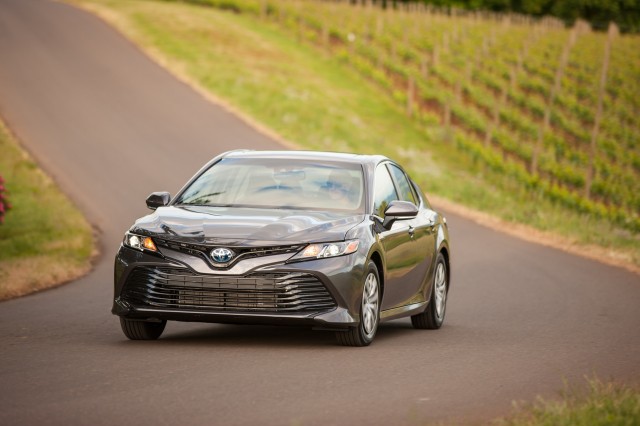 Over the course of a long day last month, we drove five separate versions of the all-new 2018 Toyota Camry mid-size sedan. Until recently, it had been Toyota's best-selling vehicle in the U.S. for 15 years—but now it's been overtaken by the RAV4 compact crossover utility vehicle.

That points out the challenge for the new Camry: demand for mid-size sedans is ebbing in favor of SUVs of all sizes. It's not as if they're going away, but the competition continues to improve while many long-time buyers look to other kinds of vehicles.

Our impressions of the new Camrys is that they'll do well in an increasingly tough segment. But that's a preliminary conclusion, because we haven't yet driven the equally new 2018 Honda Accord or the heavily updated 2018 Hyundai Sonata. Other competitors include the handsome Kia Optima, the Chevrolet Malibu, and the aging Ford Fusion and Nissan Altima.

DON'T MISS: Read our full review of the 2018 Toyota Camry

All but the Altima offer hybrid versions that face off against the new 2018 Camry Hybrid, and the Fusion, Optima, and Sonata also offer plug-in hybrid models—which Toyota doesn't. (Chevrolet's plug-in hybrid is the smaller Volt.)

With that in mind, Toyota has gone back to an old formula: longer, lower, and wider. The new Camry's styling is crisper, sleeker, and to our eyes, a largely successful update using Toyota's latest design cues—but without the oddball-to-bizarre lines of the Mirai hydrogen fuel-cell sedan or the fourth-generation Prius hybrid hatchback. 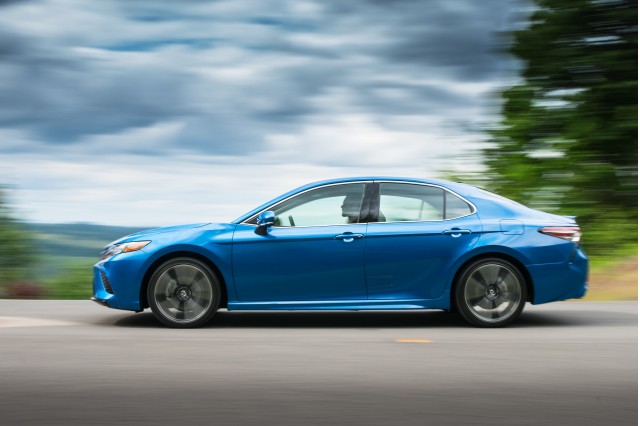 The interior of the new Camry is somewhat more premium than its predecessor, which could be taxi-plain in its lower trim levels. We couldn't make a complete assessment of the interiors, though, because every 2018 Camry we drove was a pre-production version with at least some black temporary trim substituting for the real items fitted to production cars.

Still, the new front seats have been reshaped and accommodated two rather differently shaped adult reviewers during a day of driving, with the right amount of bolstering. With the exception of bottom-of-the-line Camry L, every model has a power-adjustable driver's seat, and higher-trim versions add more types of adjustment and power for the front passenger seat as well. 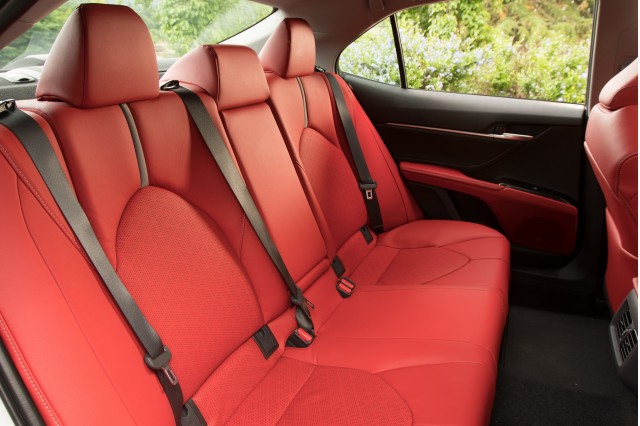 The rear seats sit lower than before, and their cushions are slightly shaped to cradle the two outboard passengers. There's enough head room front and rear for adults, but access to the rear is somewhat compromised by the narrow opening between the rear-door pillar and the corner of the seat cushion. The interior has plenty of trays, bins, cupholders, and cubbies to hold various gear.

The engine found in most 2018 Camrys sold will be a 206-horsepower 2.5-liter 4-cylinder, now mated to a new 8-speed automatic transmission to drive the front wheels. This combination doesn't feel particularly powerful, and full acceleration usually produces two and occasionally three downshifts before the car gets its maximum power. It's a tradeoff for fuel economy, with a projected EPA rating of 32 mpg combined. The base Camry L, lighter due to fewer features, comes in at a projected 34 mpg combined. 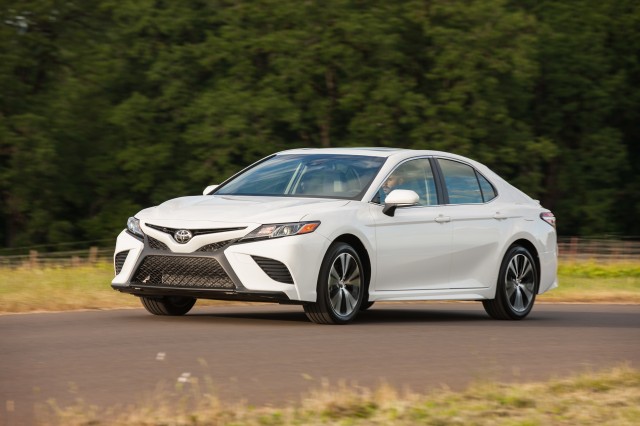 Those are decent numbers for a high-volume mid-size sedan, though the Camry Hybrid is clearly the fuel-economy champ of the lineup. The Camry Hybrid LE uses a lithium-ion battery to garner a 52-mpg combined rating, making it the first hybrid mid-size sedan to cross the 50-mpg mark. Two other hybrid models, the SE and XLE, use an older battery technology to return a combined 46-mpg rating. Siting the battery under the rear seat, by the way, gives the hybrid Camry models the same 15.1-cubic-foot trunk volume conventional versions, along with a split fold-down rear seat back. 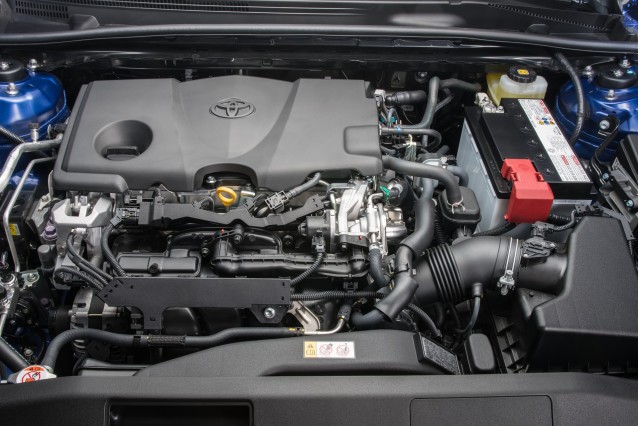 The Camry is now an outlier among mid-size sedans in retaining a V-6 option, this one a 301-hp 3.5-liter unit also paired to the new 8-speed transmission. If you want smooth, fast power, this one is your Camry, but it comes at the cost of fuel economy: it's rated at 26 mpg combined.

On the road, our favorites were the Hybrid and the V-6 models, which were smoother and more responsive than models equipped with the base engine. The hybrid gets strong low-speed acceleration from the electric motors that propel it off the line and add torque at higher speeds, while the V-6 is just old-fashioned power.

MORE: Read our first drive of the 2018 Hyundai Kona

While handling and roadholding is an improvement over the previous Camry generation, it's still only average for the segment. And the sporty pretensions of the SE and XSE model seemed more like a trim and styling exercise than a genuine attempt to produce a flat-cornering performance sedan. One indicator: Toyota proudly noted that certain SE models now come with a "four-tip exhaust," except that the outer pair of tips are just welded onto the inner pipes and don't actually act as exhausts. They're purely an appearance item. 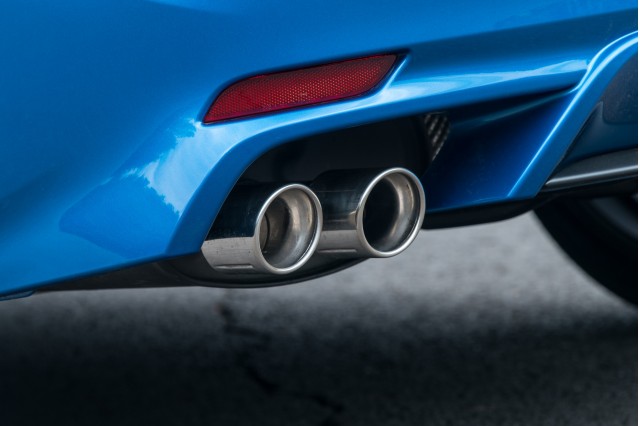 We found all the models quieter than their predecessors, except under full power in the 4-cylinder and hybrid versions. Even then, the noise was more remote and muffled than in the last generation. Our prototype test cars were slightly marred by various un-Toyota-like wind whistles—probably past the door mirrors—that we very much doubt will make it into the production vehicles found on showroom floors.

Over the last couple of years, Toyota has stepped up its safety efforts even more. All Camry models, even the bare-bones L trim, come standard with the awkwardly named Toyota Safety Sense-P package of active-safety systems. This bundles together forward-collision warnings (including pedestrian detection) with automatic emergency braking, adaptive cruise control, lane-departure warnings with active lane control, and automatic high beams. The adaptive cruise control operates only at higher speeds on most models, but adds full-speed capability on XLE and XSE versions. Blind-spot monitors with rear cross-traffic alert is optional or standard, and the optional surround-view camera system is a "Bird's Eye View" feature that shows a top-down image of the car assembled from four separate cameras around the car to aid in close maneuvering. 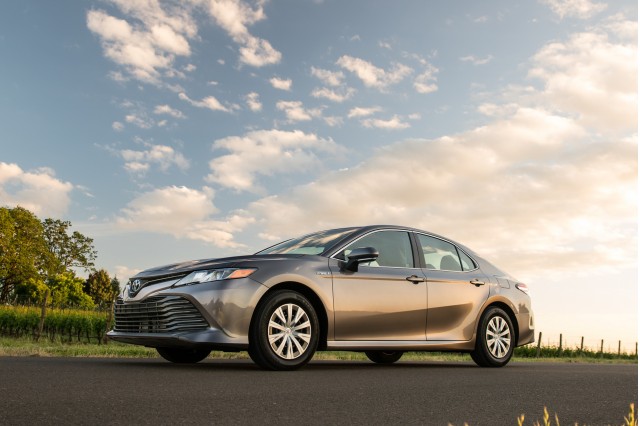 All the active-safety systems worked fine during our day of driving, though we didn't test the automatic emergency braking. The surround-view camera system was especially useful in one tight parking lot. Like most Japanese makes, Toyota's adaptive cruise control is extremely conservative on following distance. Even on the closest setting, we frequently found other vehicles cutting ahead of us—unlike the settings on U.S. and European vehicles. Neither the NHTSA nor the IIHS has issued crash safety ratings for the 2018 Toyota Camry, though we expect they'll come sometime during the next year.

The profusion of models, features, trims, and options on the full 2018 Toyota Camry lineup could be its own article, or perhaps a non-fiction book. The base Camry L will likely be restricted mostly to taxi fleets, and the most common models will be the Camry LE and SE. The higher-luxury XLE and XSE contain the most features, but higher prices. The Camry Hybrid is now offered in LE, SE, and XLE trims, and if you want the V-6 engine, you can have it as an option on the XLE and XSE models. 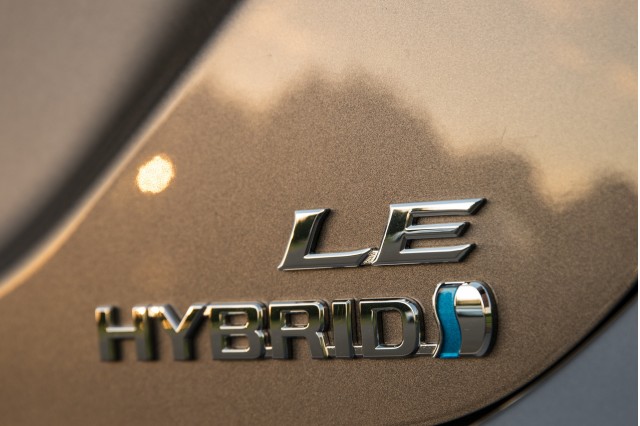 Finally, Toyota is stepping out a bit by offering available contrasting roofs on the XSE model only, as well as one interior trim with scarlet leather-trimmed upholstery—unusual for this formerly high-volume sedan that has had a bland, beige reputation for years.

Overall, the 2018 Toyota Camry proved to be a significant step up from the previous generation. It's much better looking—we think it's now among the best-looking mid-size sedans, along with the Ford Fusion—as well as more comfortable, more fuel-efficient, and offered with significant standard active-safety features. We wish the 4-cylinder models had slightly better acceleration, but that's the price of boosting fuel economy to meet federal mandates these days. We think the 2018 Toyota Camry will do well; it has a good chance of keeping Toyota at the top of the charts.