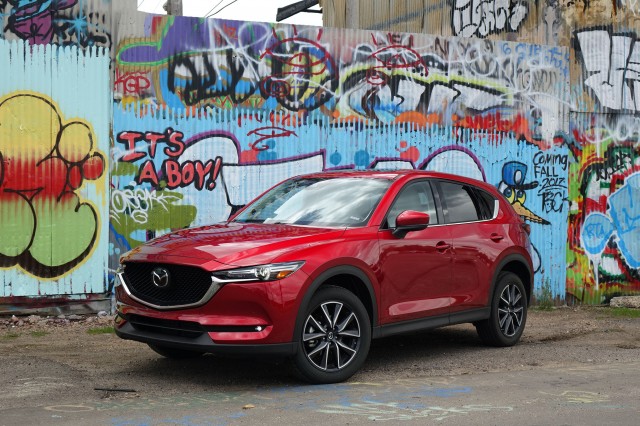 At last count, there are roughly 75 billion different compact crossovers on the market vying to become your next family car.

Well, maybe that's an overstatement. But in this crowded corner of the automotive world, each crossover needs to do at least something better than its rivals. Enter the 2017 Mazda CX-5, which the Japanese automaker has positioned as the go-to for those who want a little more zip in their tall-riding wagons.

That pizazz is more about curvy-road thrills than winning drag races. Instead, the latest CX-5 embodies the notion that it's more fun to drive a slow car fast. That's not to say that the 187-horsepower CX-5 is pokey, but in this case it's more about delivering a Euro-inspired driving experience for a mass-market price tag.

The 2017 CX-5 lineup is offered in a trio of flavors: Sport, Touring, and Grand Touring. Our test car is at the top of the heap, a $34,060 CX-5 Grand Touring with optional all-wheel drive. That's as expensive as you can order a CX-5, unless you find yourself suckered into paying extra for rustproofing (hint: don't). It's big money, but our tester with the optional $1,890 Premium Package that lacked little. All in, our CX-5 was fitted with heated, power-adjustable front seats, driver's seat memory, leather upholstery, a heated steering wheel, a moonroof, a Bose audio system, a head-up display, and automatic emergency braking.

At this price, the CX-5 competes against the Ford Escape, Chevrolet Equinox, Honda CR-V, Toyota RAV4, Subaru Forester, Nissan Rogue, Hyundai Santa Fe...we could go on. Instead, let's talk about what we noticed after our time behind the wheel. 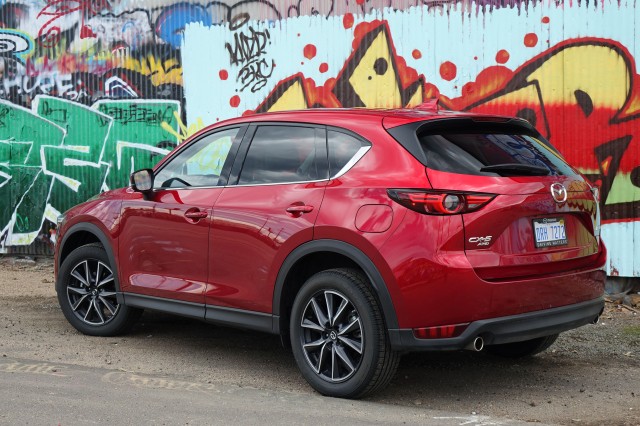 It is fun to drive

We set an early alarm and went off in search of deserted canyon roads one Sunday morning, an activity we generally reserve for true sports cars with stick shifts and lowered suspensions. The CX-5 lives up to its hype: it's easily the most enjoyable—and polished—crossover when it comes to driving. If you're buying your crossover only to slog through rush hour, that doesn't matter. But if you relish the thought of being behind the wheel, you'll find a lot to enjoy here.

DON'T MISS: Do you really need a third row in a crossover?

The CX-5's steering is beautifully weighted with a crisp, positive feel. There's a sense of what's going on underneath, and for good reason. One difference is that Mazda directly mounted the steering rack to the front suspension rather than with fluid-filled bushings that typically isolate the road too much. The steering wheel responds directly to even the most minute driver inputs, something expected in a supercar car, commendable in a sedan, and downright unheard of in a crossover. It's a wonderful thing and, in this case, it doesn't dilute the CX-5's terrific ride quality. Even with the Grand Touring's 19-inch alloy wheels wrapped in tires with short sidewalls, the suspension smothers out bumps better than crossovers costing two and three times as much.

Admittedly, the standards aren't very high when it comes to crossovers that'll put a smile on your face, but the CX-5 is certainly the new standard-bearer.

Though it isn't quick

True, the CX-5's 2.5-liter 4-cylinder is merely adequate for its class. It's tasked with motivating a curb weight that's on the low end for compact crossovers, which helps. But while the 6-speed automatic shifts smoothly without low-speed confusion, it doesn't do much to elevate things. There's no stick-shift on offer any longer, but given the almost non-existent sales of the last generation CX-5 manual, it appears that only a few people cared. We're looking at you, Tom in Topeka and Beth in Boston.

Up against, say, a Rogue or a CR-V, the CX-5's real-world acceleration with a load of passengers is perfectly acceptable. The engine is eager to rev, but you'd hardly know that given the CX-5's substantial sound deadening. What it lacks is a higher-power option to square off against the likes of the Ford Escape and Subaru Forester XT 2.0-liter turbos. 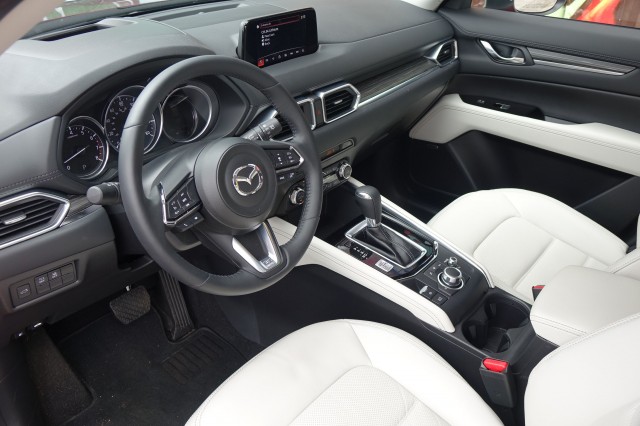 With looks that could have come from an Italian design studio, the CX-5 stands out against its dowdier competitors both inside and out. It's basically a shrunken version of the automaker's similarly attractive CX-9. Unlike that three-row crossover, however, the CX-5 doesn't put form entirely above function. Instead, the two seem to be on a level playing field.

The CX-5 boasts decent rear seat room and a capacious cargo area accessed by some of the easiest-to-fold second row seat backs around. Tug a lever and they flop down immediately. One demerit is that the CX-5's shapely roofline restricts the over-the-shoulder view. This is somewhat rectified by the large outside mirrors and blind-spot monitors, but that little triangle of a window is darn near useless.

Not a technical knockout

Where the CX-5 could stand improvement is in the infotainment section. Yes, the 7.0-inch high-resolution touchscreen sprouting out of the dashboard is attractive. Yes, it's also hugely frustrating to operate. It's simply too menu-intensive; even accessing something simple like radio presets requires twisting a knurled plastic knob that takes up a lot of center console real estate. A set of preset buttons below the climate controls would help, but the problem here is ultimately more about software than hardware.

Apple CarPlay and Android Auto are quick fixes for that, which Mazda recently announced that they would support in upcoming models. The CX-5 has the hardware to run both proxy infotainment systems, but we haven't yet heard if they've flipped the switch.