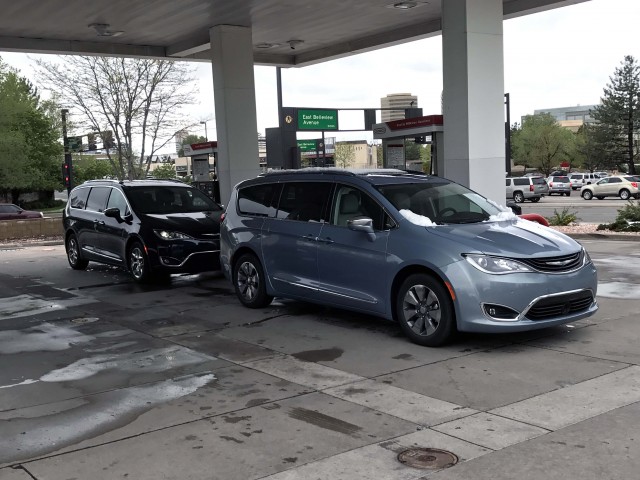 When we picked up our long-termer in Dallas and drove to Denver, the empty stretches of plains had our minds wandering to chaste matters.

Our 2017 Chrysler Pacifica Limited had a near-twin last year, months after it was released in the form of a battery-hybrid, plug-in version. In Denver, our Pacifica Limited now had a date to meet its digital double.

We liked the gas-only Pacifica so much that we named it our Best Car to Buy 2017, but the Pacifica Hybrid was left off the list due to limited availability. Early drives on our long-term Pacifica  netted just under the claimed combined figure? How much better could the hybrid version do?

When we finally found a hybrid in our clutches, we didn't let it go until it danced with the gas version.

Our determined path found us winding through exurban Denver and south toward Colorado Springs—a family-first kind of town, we've heard. We were properly equipped—The Car Connection's Senior Editor Andrew Ganz and me—to roll through rural highways, mild- to moderate-traffic jams, interstate jaunts, all with a fresh blanket of Colorado spring snow nearby.

We topped off both tanks and noticed the cap-less fuel necks had minor differences. The Pacifica Hybrid had a fuel-door release button near the door handle, our Pacifica didn't. Aside from cursory questions about the engineering required to fit one minivan with the required electrical hardware and not the other, we wondered: what gives? The explanation from a Chrysler spokeswoman was clear and concise: The Pacifica Hybrid is a zero-emissions vehicle in the eyes of John Q. Law, which requires the locking cap to better control hydrocarbon vapor. The explanation seems legit. What about the lack of an integrated garage-door opener in the Pacifica Hybrid? Check back next year, says Chrysler. Fair enough.

In addition to topping up the gas tanks, we also topped up the tank of electrons for the Pacifica Hybrid.

Our 90-mile loop included exurban stop-and-go to 55 mph, higher speeds, and a notoriously busy interstate back home. In short, none of the stoplight grand-prix duty that keeps hybrids in their sweet spots.

The races, we're off to them

As we departed the relatively quiet confines of south suburban Denver, the Pacifica Hybrid indicated a 33-mile range with a battery full of electrons. Near-freezing temperatures meant that the gas engine fired up intermittently to condition the cabin, which was a surprise.

In retrospect, it shouldn't have been. After all, many other hybrids won't run in electric-only mode under certain conditions—outside temperature being among the first. Climate controls are a long draw on battery charge, and the Pacifica Hybrid opting for gas-powered heat wasn't unwelcome, indicated outside temperature was into the 40s with fresh snow on the ground outside.

As we powered through the pencil-straight two-lane roads and Colorado ranches, the Pacifica Hybrid ran out of abundant electricity and dipped into gas power. After just over 28 miles on electric power, the Pacifica Hybrid shut off its electric-only power and asked the V-6 engine and electronically controlled continuously variable automatic transmission (CVT) to tip in power.

Mid-range passing power was plentiful between the 287-horsepower V-6 in our Pacifica Limited and 260-hp combined output of the Pacifica Hybrid and we found highway and extra-highway speeds without much effort.

A quick sandwich and driver switch left us in a typical interstate slog, complete with stop-and-go traffic.

Both models were outfitted with adaptive cruise control with stop-and-go functionality, but only the Pacifica Hybrid seemed uncomfortable. Clicking noises from the front wheels could be attributed to regenerative braking systems swapping duties with the friction brakes, according to Chrysler.

According to us, we noticed, but it was only a mild annoyance.

That's not a hugely surprising figure considering the efficiency mission of the $47,885 Pacifica Hybrid. The surprise? Our long-term Pacifica clocked in at a nearly identical $47,480 but lacks the $7,500 federal rebate and applicable state incentives that the Hybrid can. Want more? In Colorado, if we had tested the dealer price too, an additional $5,000 could have been placed on the hood of the Hybrid.

Add it up in fuel economy savings and the Hybrid's 31-mpg combined without a charge, 84 MPGe according to the EPA, and it starts to make the Pacifica+electrons seem like a steal.

Minivans may not be sexy, but more money is always attractive.