Connect with our dealer and finance partners through our site and ask for details regarding their at-home car buying services.
OK
HomeNewsFuel Efficiency 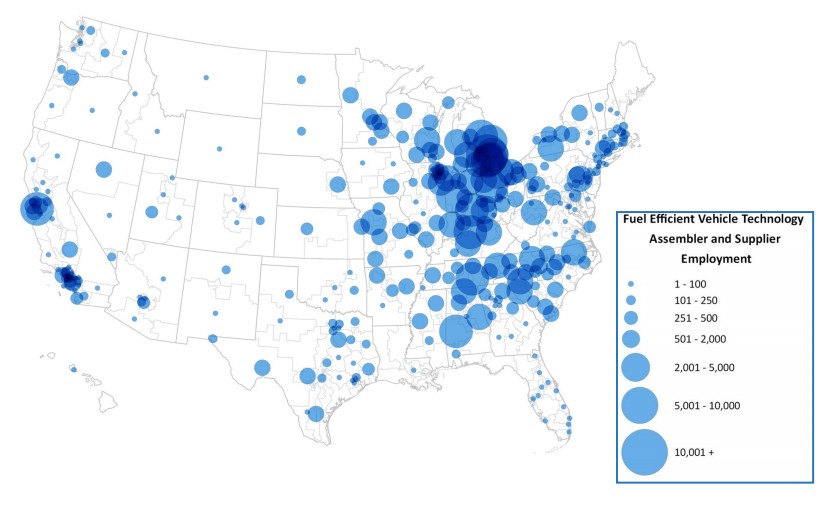 In March, U.S. president Donald Trump authorized a review of a controversial decision made by the Environmental Protection Agency during the final days of the Obama administration. The decision tightened emissions regulations for U.S. automobiles through model year 2025.

Environmental groups have been sounding alarms ever since, worried that Trump's distaste for regulation and skepticism around climate change will lead to an undoing of the EPA's eco-friendly rules. But a study published this week shows that Planet Earth's climate might not be the only thing to suffer if the rules are rolled back: U.S. jobs could take a hit, too.

The study comes from the BlueGreen Alliance and the National Resources Defense Council. The former describes itself as an organization that "unites America’s largest labor unions and its most influential environmental organizations to solve today’s environmental challenges in ways that create and maintain quality jobs and build a stronger, fairer economy." The latter is a nonprofit that works "to protect the world’s natural resources, public health, and the environment."

In other words, the funders of the study have a serious interest in the outcome of the debate around climate change and environmental policy. That's not to say that we should discount the study out of hand, only that we should view its conclusions at arm's length.

The authors sum up their findings in one early sentence:

And of course, as those technologies evolve and become more commonplace, the number of people needed to produce them will likely grow.

The study authors say that if the Trump administration alters the current EPA rules, those jobs could be put in jeopardy. But apart from urging regulators to stay the course for economic reasons, the BlueGreen Alliance and the National Resources Defense Council have two other goals:

1. To encourage domestic manufacturing "and enhance—rather than degrade—labor and environmental standards globally." In other words, the authors are pushing for the U.S. to remain in a strong leadership position for the nascent green-energy revolution.

2. To ensure that workers at car companies and suppliers earn ample wages to support their families and retain decent benefits.

No matter how enthusiastic (or unenthusiastic) you might be about fuel-efficient technologies, there's no denying that significant changes are coming to the auto industry. In the long term, electrification and autonomous technology will become dominant forces, but in the interim, automakers will implement a range of tweaks to boost efficiency in other ways.

As these changes roll out, a growing number of employees around the world will be working on the components for those tweaks. The study's authors insist that if the U.S. wants to remain a leader in tomorrow's auto industry, it needs to dive headlong into the efficiency transition, not attempt to avoid it.

Despite the clear dispositions of the study's authors, it's hard to argue against many of their claims. If you're so inclined, though, you can download a copy of the report for yourself here.