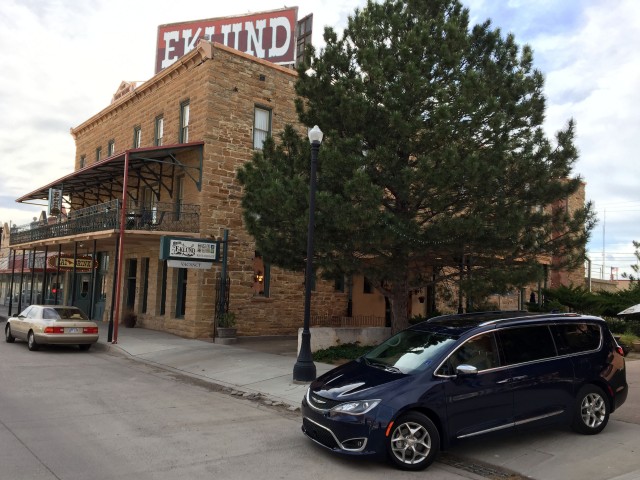 Minivans are dual-nature vehicles—as adept at transporting humans as they are cargo.

I recently tested the latter in our long-term 2017 Chrysler Pacifica Limited by packing up many of my childhood memories, a 6-foot-tall tool chest, and a nearly 20-year old Specialized Stumpjumper mountain bike that were being graciously stored in my parents' Texas garage about 800 miles away from my Denver home.

I don't know who's happier now, my parents and their less-cluttered garage or me with my more-cluttered garage. But one thing's for sure: the Pacifica makes a terrific road-trip hauler.

Splitting the time with my fiancée, we dawdled between two-lane roads that turn surprisingly curvy and multi-line, high-speed expressways. According to the Pacifica's trip computer, we averaged more than 27 mpg, despite climbing from just a bit over sea level to the Mile High City. Doing the math by hand, it was more like 25 mpg, however.

Our route departed the sprawling Dallas-Fort Worth metroplex (which boasts about 1 million more inhabitants than all of Colorado) where the wooded Cross Timbers gives way to rocky prairie land. The home of the roving Comanche tribe until the mid-1870s, there's a distinct Western heritage to the area, with numerous roadside monuments marking where American settlers clashed with the Comanche tribe during the latter half of the 19th century. Each sign erected by the Texas Historical Commission paints a vivid picture of just how violent this area could be even after the United States declared the Texas frontier settled in the 1870s.

Today, the towns of the Texas panhandle are quiet, with few signs of life on a quiet May Sunday. This is Larry McMurtry country, and his "Last Picture Show" that was adapted into an Academy Award-winning film more than 40 years ago has proven prophetic. There's little opportunity for a meal here on a Sunday afternoon, so the combo menu at Arby's was our best bet. The smattering of towns along U.S. 287 are distinguishable more for their varied Dairy Queens than for anything else. A young generation has departed the Texas Panhandle in favor of Austin and Dallas, leaving only a skeleton crew of caretakers to cultivate this fertile soil.

The terrain alternates between gently rolling prairie and rocky outcrops until flattening out around Amarillo. But just outside of Texas' northernmost city, a ribbon of pavement cuts through cowboy country, meandering 20 miles to Tascosa. Hollywood couldn't create a better backdrop to enter the staked plains, known to Texans as the Llano Estacado. The land plateaus into the Great American Desert, offering miles of treeless views. With the Pacifica's navigation map displayed on its 8.4-inch screen, it's impossible to get lost. But flash back to 130 years ago and it's hard to imagine how deftly the Southern Plains tribes made their way through this featureless terrain. 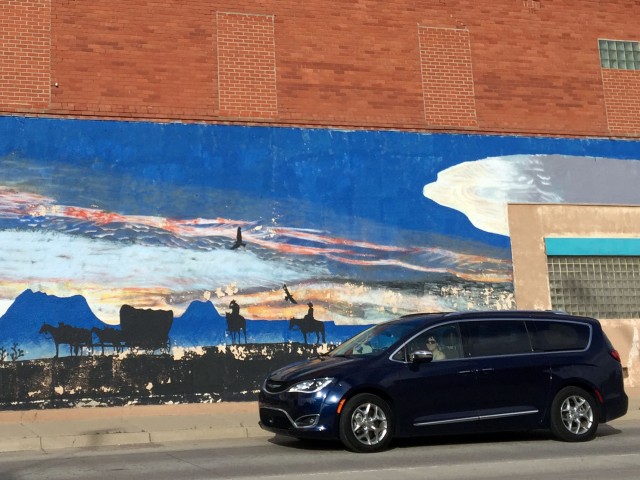 At the aptly named Texline, the Lone Star State gives way to always enchanting New Mexico and soon mountains appear in the distance. The temperature drops and the road subtly climbs into an inactive volcanic field. With Capulin, a cinder cone volcano that last erupted about 50,000 years ago, looming ahead, we pulled off at the lovingly restored Eklund Hotel in Clayton, New Mexico. A sharp contrast to Texas' tumbleweed towns, Clayton is a lively stopover on the way to the mountains. Offering respite in the form of hearty flat enchiladas served "Christmas style" with red and green chile sauce, beer brewed in Santa Fe, the Eklund's restaurant and bar are a step back to the 1890s—albeit with fast wi-fi. We didn't stick around long enough to sample its quaint rooms or to catch a flick in the restored Luna Theater.

Instead, we pressed on from Clayton, making our way across the pastoral Raton-Clayton volcanic field to Interstate 25, which feels a world away as it hustles cars and trucks quickly along the Front Range of the Rocky Mountains. Watching the sun set over Colorado Springs, we made it home under the cloak of darkness.

With its quiet interior, firmly supportive nappa leather-wrapped seats, and bass-heavy 560-watt audio system, our long-term Pacifica acquitted itself well on its journey to Colorado. It won't stay here in the land of Subarus long, however. Just as its capacious cargo bay is unloaded with my long-forgotten Hot Wheels collection and a piece of kindergarten art that Mom says would look great on the mantle, Senior Editor John Voelcker plans to take it to Reno (trailed perhaps by 20 hounds) on a mission to collect some classic car parts.