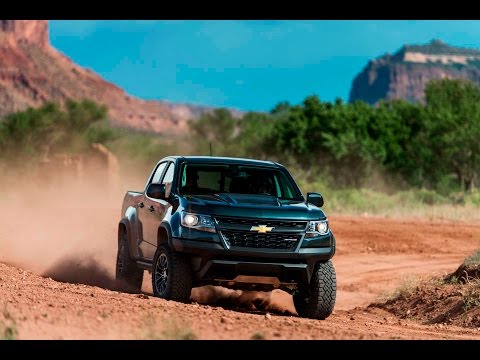 The pickup arms race has given us a 450-horsepower full-size truck already this year.

Now, the war is spreading to the small artillery division, and Chevy is bringing heavy metal to bring to the fight.

Who wants to get some?

The differences between the ZR2 and a standard Colorado are clear. Beyond the knobby tires and muscled-up bumpers, the ZR2 is 2 inches taller and 3.5 inches wider. No front air dam means that the ZR2 has better approach angles for off-roading than the base Colorado—which was frankly, lousy.

MORE: Read our full review of the 2017 Chevrolet Colorado

But what’s more interesting is almost what you can’t see.

At each corner, clever two-stage dampers are planted on each wheel to maximize on-road—and off-road—performance. The details here are enough to fill a textbook on fluid dynamics, so I’ll just hit the essence. It’s a dual-mode shock system that uses different compression and rebound rates for on- and off-road situations.

The results are alarming. And it makes for one of the most comfortable Baja trucks we’ve driven this year.

The ZR2 sports locking front and rear differentials along with a two-speed transfer case, so it certainly has the goods to go off road. Chevy included an “Off-road” mode for the ZR2’s that speeds up throttle response, holds gears longer, and changes the traction control for better grip.

In our drives, even the off-road mode is still too strict. To turn everything off, it’s worth holding down all the buttons to get the ZR2 sideways on dirt.

Beyond its drivability off road—which should be the reasons why you consider it in the first place—the ZR2 still feels like a Colorado. And for most folks, that’s a good thing. From the inside out, the ZR2 looks and behaves like a Colorado. There’s a big touchscreen, everything is in the right place, and the interior doesn’t look like it’ll be dated in 5 years. Apple CarPlay and Android Auto handle the infotainment duties best.

The diesel has rock-crawling grunt. The gas model is better for powering through sand. Beyond the engine differences, the trucks are nearly identical right down to the springs and nuts. The diesel adds a couple hundred pounds to the front, but suspension tuning negates some of that nose-heavy feel.

Compared to other trucks like it, the Colorado is smaller and more nimble than other off-road leaning full-sizers.

And that’s the ZR2’s secret weapon. It's no Raptor, but there’s enough engineering under the truck to make it a heavyweight off-road. But the truck’s smaller size off-road and right-size on-road mean that even this little guy has a lot of firepower.