Connect with our dealer and finance partners through our site and ask for details regarding their at-home car buying services.
OK
HomeNewsself-driving cars

Study: By 2030, self-driving cars could cut car ownership by 80 percent 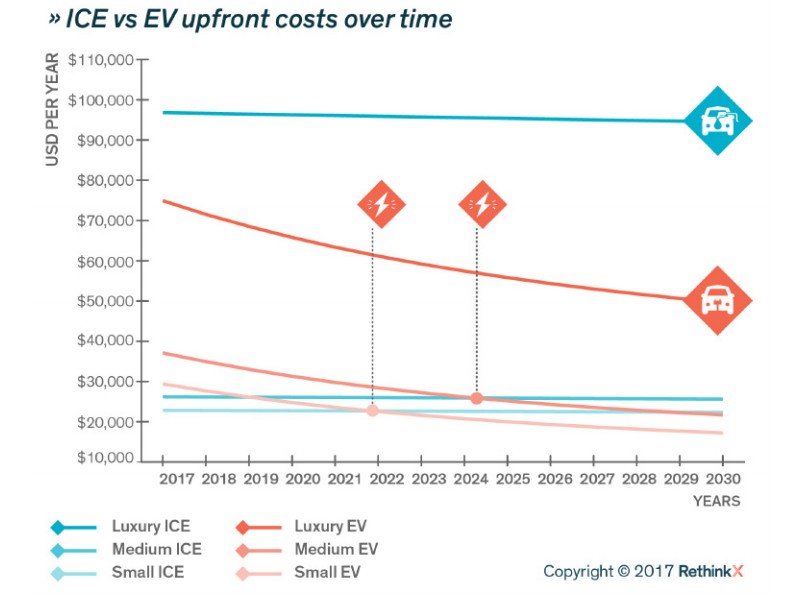 Stop us if you've heard this one before: someone's published a study on self-driving cars and the effect they'll have on transportation.

In the past year alone, we've seen plenty of those studies. Some show that people are afraid of self-driving vehicles (even though they're totally onboard with semi-autonomous features like adaptive cruise control and braking assist, and they'd be fine with cars from Google and Apple, which would be largely self-driving.)

Other studies predict that huge numbers of self-driving vehicles will take to the road in the near future and that America's burgeoning gig economy will be hit hard as a result. (Then again, another study claims that more than 2 million disabled people will re-enter the workforce thanks to self-driving cars, so the effect may not be all that bad.) Some reports suggest that autonomous vehicles will have serious, unforeseen impacts, like reducing the supply of donor organs.

And arguably the most interesting study we've read in recent months shows that people totally plan to get busy in the back seat while HAL 9000 does the driving. (Others will be praying--though for what, we can only imagine.)

The latest study to cross our inbox comes from RethinkX, which describes itself as "an independent think tank that analyzes and forecasts the speed and scale of technology-driven disruption and its implications across society". The title of the study in question is Rethinking Transportation 2020-2030: The Disruption of Transportation and the Collapse of the Internal-Combustion Vehicle and Oil Industries, which offers some very strong clues as to what's inside.

The authors of the study reached their conclusions by examining a wide range of factors that will affect the roll-out, acceptance, and purchase of self-driving vehicles. Such factors include early applications of the technology, laws that forbid or encourage self-driving cars, and consumer attitudes toward autonomous vehicles.

It is, of course, just one of many visions of the future, but it's a thoughtful one, and quite a bit of it rings true. The study itself is on the long side, but here are some of the authors' key points. (We've included a link to the full study below.)

Change will happen quickly--and by "quickly", the authors mean "within the next 13 years":

"By 2030, within 10 years of regulatory approval of autonomous vehicles (AVs), 95% of U.S. passenger miles traveled will be served by on-demand autonomous electric vehicles owned by fleets, not individuals, in a new business model we call 'transport-as-a-service' (TaaS)."

Change will happen quickly because of the economic benefits to consumers:

"Using TaaS, the average American family will save more than $5,600 per year in transportation costs, equivalent to a wage raise of 10%. This will keep an additional $1 trillion per year in Americans’ pockets by 2030, potentially generating the largest infusion of consumer spending in history....

[Taas] will offer vastly lower-cost transport alternatives — four to ten times cheaper per mile than buying a new car and two to four times cheaper than operating an existing vehicle in 2021."

Lyft, Uber, and other ride-sharing companies will make huge investments in their fleets to vie for customers:

"High vehicle utilization (each car will be used at least 10 times more than individually owned cars) will mean that far fewer cars will be needed in the U.S. vehicle fleet, and therefore there will be no supply constraint to the speed and extent of TaaS adoption that we forecast....

"As fewer cars travel more miles, the number of passenger vehicles on American roads will drop from 247 million to 44 million, opening up vast tracts of land for other, more productive uses. Nearly 100 million existing vehicles will be abandoned as they become economically unviable....

" Demand for new vehicles will plummet: 70% fewer passenger cars and trucks will be manufactured each year. This could result in total disruption of the car value chain, with car dealers, maintenance and insurance companies suffering almost complete destruction."

"The impact of the collapse of oil prices throughout the oil industry value chain will be felt as soon as 2021.

The effect on the environment could be profound:

"The TaaS transport system will reduce energy demand by 80% and tailpipe emissions by over 90%. Assuming a concurrent disruption of the electricity infrastructure by solar and wind, we may see a largely carbon-free road transportation system by 2030."

Our take on this particular study can be summed up in three words: "pretty damned rosy".

That's not to say that the authors' predictions are entirely unrealistic. We fully agree that autonomous and electric vehicles are poised to upend the auto industry and the field of transportation.

However, the timeline they envision seems very, very optimistic. For example, even though they acknowledge the geopolitical risks that will accompany the shift away from internal combustion cars that run on fossil fuels, we're not sure they fully account for the fallout that will occur when international corporations and entire nations fall into death spirals due to plummeting demand for oil. (Looking at you, Venezuela.) That fallout could easily affect the U.S. financial markets, electric car subsidies, and other areas that would, in turn, affect adoption rates by consumers and fleet owners.

But hey, what do we know? Take a look at the study for yourself and see what you think. You can download a PDF of Rethinking Transportation 2020-2030: The Disruption of Transportation and the Collapse of the Internal-Combustion Vehicle and Oil Industries by clicking here.