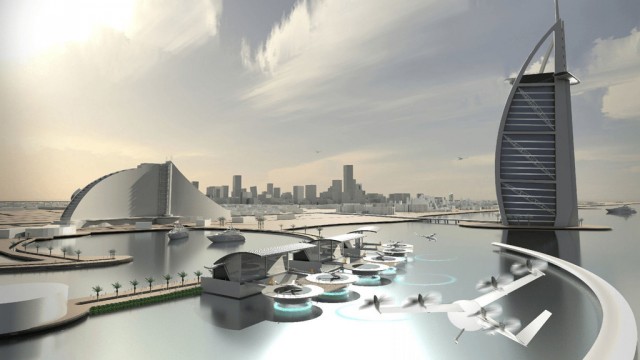 Flying cars are April's flavor of the month. Aeromobile recently showed off an awkward prototype in Monaco, clips of a Larry Page-backed levitating jet ski have gone viral, and studies have even been published about the things, even though serious talk about flying cars seems pretty premature.

Now, Uber is getting into the flying-car game--well, sort of. The troubled ride-sharing company has announced plans to launch a flying taxi service called Elevate in the not-too-distant future.

The announcement came this week in Dallas at the Uber Elevate Summit, and it included some interesting tidbits of information:

3. Uber also wants the vehicles to be fully electric and ultimately, fully autonomous (though they'll likely start out as semi-autonomous vehicles).

4. Elevate's flying taxis will make use of heliports "vertiports" strategically placed in major cities, probably on top of buildings. That makes sense, since many of their first travelers are likely to be business people commuting home or traveling to meetings in other parts of town. Uber hopes to have the vertiports within walking distance of concentrated commercial and residential centers.

5. Elevate is expected to launch by 2023, with wide-scale rollout by 2027. Dallas-Fort Worth is already onboard with the program, and Uber hopes that Dubai will sign on, too.

Technically speaking, Elevate isn't a "flying car" company. Frankly, it's not all that different from the helicopter taxi services that have operated for years in many parts of the world--especially those areas where surface roads remain congested.

What makes Elevate unique is the types of craft it plans to use. Essentially, Uber has asked five companies to rethink the helicopter, making it electric, autonomous, and far quieter. That could minimize concerns over noise pollution and improve availability. (After all, with no pilots, the vehicles could be employed 24 hours a day, seven days a week.)

That, in turn, could make Elevate more attractive to cities and consumers--provided that it's priced affordably. We'll know more about that in a few years.