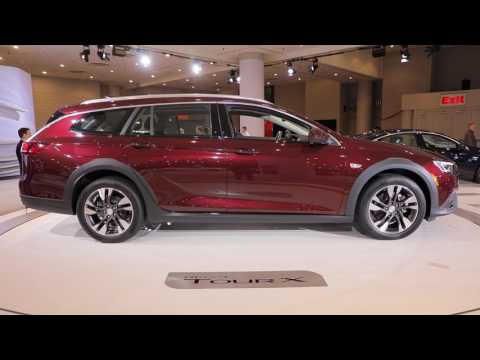 Are the days of the four-door sedan numbered?

Take a look at the Buick stand at the New York Auto Show and you might ask the same question—especially when you go looking for the new Regal sedan.

Instead, for 2018, Buick has this pair of mid-size, five-seat cars. One's a hatchback, and one's a wagon. Let's take a look.

First up there's the Buick Regal Sportback, a five-door hatch that's a near-twin to the Opel Insignia sold in Europe. A couple of inches longer than last year's Regal sedan, the new Sportback does what Audi's A7 does. It disguises its rear hatch in a pretty fastback roofline. Open the tailgate, and the Sportback has up to 60.7 cubic feet of space inside. All-wheel drive is an option.

Next, there's the Regal TourX, a slightly more traditional wagon with fender flares, a raised ride height, and standard all-wheel drive. It's bigger than rival vehicles from Subaru and Volvo, and has a vast 73.5-cubic-foot cargo space behind the front seats.

Both of these models share most of their underpinnings. Based on a front-drive platform, the Regals have a 2.0-liter turbo-4 with about 250 hp and 295 lb-ft of torque of torque. Most new Regals will get an 8-speed automatic standard, but front-drive Sportbacks will have a 9-speed automatic.

The Regals' new all-wheel-drive system can dole out power between the rear wheels, thanks to a pair of clutches and sophisticated traction control. The suspension is independent all around, struts in front and multi-link in the rear.

We don't have a complete rundown on standard features and prices, but all Regals get a touchscreen infotainment system with Apple CarPlay and Android Auto. A navigation system with a bigger screen will be an option, along with Bose audio, blind-spot monitors, adaptive cruise control, and active lane control.

We'll have more on the Regal later this year, when we take you along for our first drive.