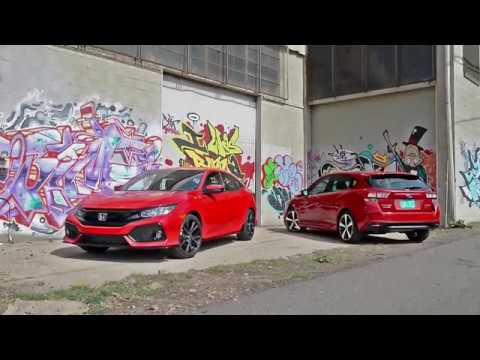 It's hip to be frugal these days, but that doesn't mean that a compact hatchback has to be merely an appliance.

They aim for the same buyer—someone who wants to spend between $20,000 and $30,000 on a car that balances fuel economy with practicality. A little driving zest doesn't hurt, either, which is why both models come in the sport trims seen here.

The recipe is basically the same. Sport models of both include larger wheels buttoned-down suspensions. They're not quite Porsches, but they are definitely zippy.

DON'T MISS: Read our full review of the 2017 Subaru Impreza

Don't assume that both the Civic and the Impreza are cut from the same mold. For one, the Honda is front-wheel drive and it's rated at 180 horsepower. The Impreza, as is tradition for Subaru, comes standard with all-wheel drive. But it has just 152 horsepower. Predictably, the Civic runs circles around the Impreza—as long as it's not snowing.

Both models are decently equipped from the get-go with stick shifts, but tick all the boxes and you'll wind up with leather seats, moonroofs, seat heaters, fancy stereos, and all sorts of safety equipment.

If you're buying a hatchback over a sedan, it's probably because you want to carry more. To that end, it's a mixed bag. The Civic has nearly 26 cubic feet of cargo space with its second row upright compared to just 21 for the Impreza. But in terms of maximum capacity, the Subaru comes out way ahead with 55 cubes versus 46 for the Civic.

That's a virtue of the Impreza's roomier passenger compartment. There's more stretch-out room here than in the Honda, but neither is a punishing place for four or even five passengers in a pinch.

Both have comfortable space and great visibility for drivers. We give the Honda the edge for its interior styling and small item storage, but Subaru's infotainment system is far more advanced than the standard radio on the Civic seen here. Even Honda's extra-cost touchscreen infotainment doesn't quite compare to the Impreza's classy setup.

On the road, the two cars quickly reveal their differences. The Impreza is quiet and refined, with little road rumble or engine growl entering its well-isolated cabin. Turn up the wick and it handles confidently. The Sport trim has its own suspension and steering tuning and it shows; it's an entertaining little hatchback. But what it lacks is power, something exacerbated by its optional continuously variable automatic transmission. You'll need to dig deep into the gas pedal to really maximize the Impreza.

The ace up the Impreza's sleeve is its all-wheel drive, which turns it into a mountain goat on slippery roads. If you're a city slicker from San Diego, that's probably not crucial—but then again, there's not really a big fuel economy hit. The Impreza Sport 5-door with the automatic is rated at 30 mpg combined running on regular unleaded.

MUST SEE: Read our full review of the 2017 Honda Civic

The Civic is stiffer and louder, but it also enters and exits corners like a genuine sports car with power to spare. We love its stick shift but we aren't as crazy about its optional CVT. It's a little buzzier than the Subaru's. At 32 mpg combined, the Honda is thriftier, but it takes premium fuel that may wind up costing you more.

So which one is our favorite? It's a close contest. The Subaru comes across as a downsized Audi, with suave moves and subtly good looks. But it's not particularly quick and it's not as entertaining to drive as the Honda Civic. Here, we give the slight edge to the zippy little Honda. It's a hoot to put through its paces and it's immensely practical.

7.0
Expert Rating
The 2017 Subaru Impreza blends sensible road manners with all-wheel drive and a digestible price. It's right in line with compact competitors, all of which offer something different in the segment.
7.8
Expert Rating
The 2017 Honda Civic gains a hatchback body this year, but we were already sold. It's a very good compact car.

6.0
Expert Rating
Quieter than it's predecessor, the Impreza is comfortable for four—we advise opting for the hatchback if you're looking for sheer functionality.
Read More
7.0
Expert Rating
It's not the same compact as before; four will find enough room for their feet, gear, and beverages in the new Civic.
Read More

7.0
Expert Rating
Standard all-wheel drive and well-equipped, the 2017 Subaru Impreza is a compelling value for compact shoppers.
Read More
7.0
Expert Rating
The 2017 Honda Civic covers wide ground quickly, but most of the options are walled off in increasing trim packages.
Read More

8.0
Expert Rating
At 32 mpg combined, the 2017 Subaru Impreza is one of the most fuel-efficient all-wheel-drive vehicles sold in the U.S.
Read More
9.0
Expert Rating
Regardless of powertrain, body style—or your shirt size—the 2017 Honda Civic is remarkably fuel efficient.
Read More

With competitive price quotes from multiple dealers, you will be prepared when you meet your local car dealer. Please tell us how to contact you so that dealers can compete for your business!
2022 Subaru Impreza
There are no Subaru dealers in our network that are located near the ZIP code.
2022 Honda Civic
There are no Honda dealers in our network that are located near the ZIP code.
Thank you!
We have sent your request for price quotes on the 2022 Subaru Impreza and 2022 Honda Civic to the dealers you requested. They should be in touch shortly.
The Car Connection's dealer quote process is powered by our partner site CarsDirect.
Your request for a fast, free price quote on a 2022 Subaru Impreza and 2022 Honda Civic is in process. The CarsDirect Dealer(s) listed below will contact you shortly to discuss your request and to provide a quote. If you have questions now, you can contact the dealer(s) directly using the information provided below or contact CarsDirect's award-winning customer service team at 1.888.CarsDirect (1.888.227.7347) or [email protected]
For your reference, your customer transaction number is .
Tell us a little bit about yourself
Looking for dealers in your area...

*As configured. Excludes taxes, title, license and other customary fees, such as dealer documentation fees, tire and battery disposal fees and, where applicable, finance charges. By clicking on “Get Your Price Quote Now”, you agree to our Terms of Use (including the Supplemental Terms) and Privacy Policy. You further consent to being contacted at the number you provided by CarsDirect and certain participating automotive dealerships, which may include autodials, text messages, and/or pre-recorded calls; this consent is not a condition of purchase or service. Message and data rates may apply.
Have feedback about this experience?
Let us know.
Tags:
Videos 2017 Compare Cars Honda Civic News Honda News
2022
The Car Connection
See the winners »
2022
The Car Connection
See The Winner and Nominees »