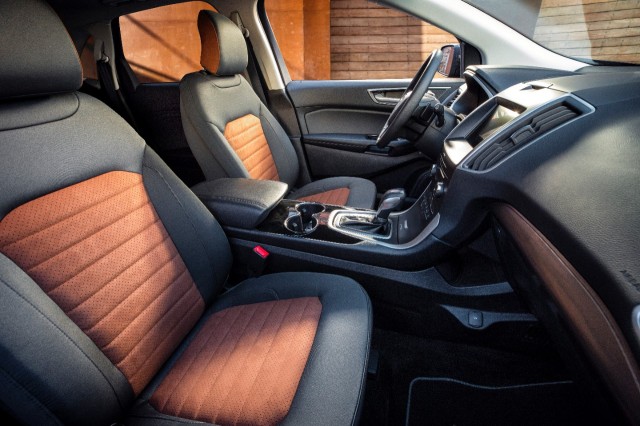 The term "sport" gets used in a lot of different ways these days. In this case, with its 2018 Edge, Ford is dressing things up a bit with a new extra cost SEL Sport appearance package.

At first glance, the package, which doesn't add anything to later the Edge's ride and handling, seems like just another ploy to separate money from wallets in the interest of style. But what's unique here is that Ford is asking buyers to pay more for fancier cloth, rather than leather, upholstery.

It's a gamble; will buyers be willing to spend more for seats not covered in hides?

Outside, it's all about the look: dark chrome and painted accents and special model-specific 19-inch alloy wheels. Inside, there are unique floor mats and special trim pieces, but the newsmaker shere are seats covered in a combination of traditional woven cloth and a sueded material between the bolsters on the seats' central area. Ford points out that the suede-esque inserts in the center of the crossover's seats will be a lot cooler to the touch on hot day than leather.

Given that Ford unveiled the 2018 Edge SEL Sport in toasty Dallas, where it says it sells a slightly higher percentage of Edges with cloth (rather than leather) seats, it may wind up being a cool decision for the Blue Oval brand.

The package builds on the mid-level Edge SEL, which in 2017 runs about $32,500 to start. Ford hasn't announced pricing for the new SEL Sport package and it hasn't said if there will be any other changes for the 2018 model year.