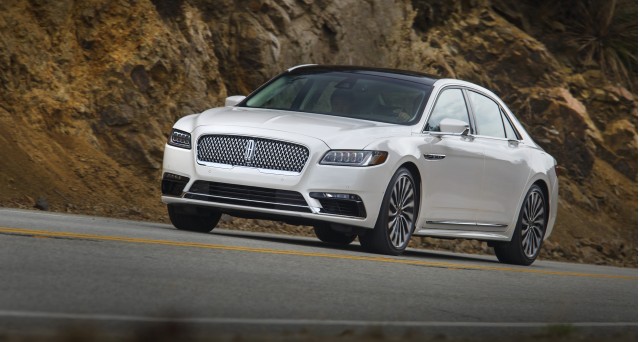 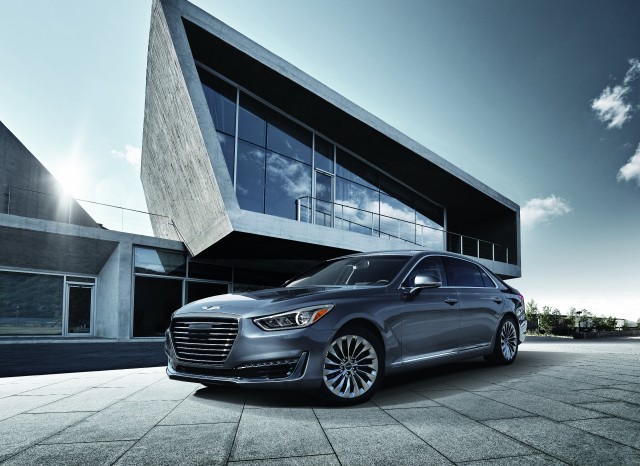 The 2017 Lincoln Continental and 2017 Genesis G90 are two different takes on flagship-level luxury. Each provides its own way of pampering the driver—and all passengers along for the ride. But there can only be one winner.

It's a close one, but in our eyes the Genesis G90 does the top-end luxury thing just a little better than the Continental. (Read more about how we rate cars.)

Last year, neither the G90 nor the Continental existed—each has its own unique coming to fruition story.

Genesis is a new brand spawned by parent company Hyundai. Genesis takes its inspiration from Toyota's Lexus division as a high-end nameplate that places pampering above all else. Previously, the G90 was known as the Hyundai Equus, but the 2017 is an all-new evolution of the old Equus. Lincoln, on the other hand, is hardly a new arrival into the luxury space—but parent company Ford neglected the brand to the point of irrelevancy. But the Continental signals the beginning of a new era, with just a few cues to the brand's illustrious and nearly forgotten past lurking for those willing to take a look. 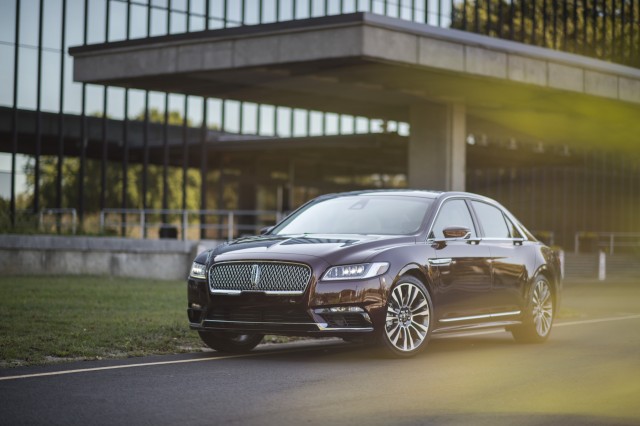 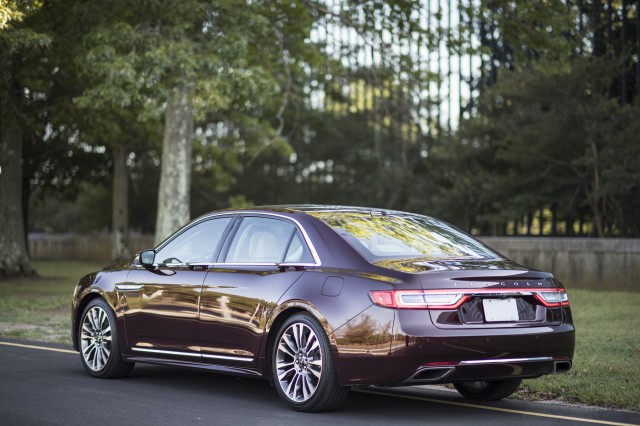 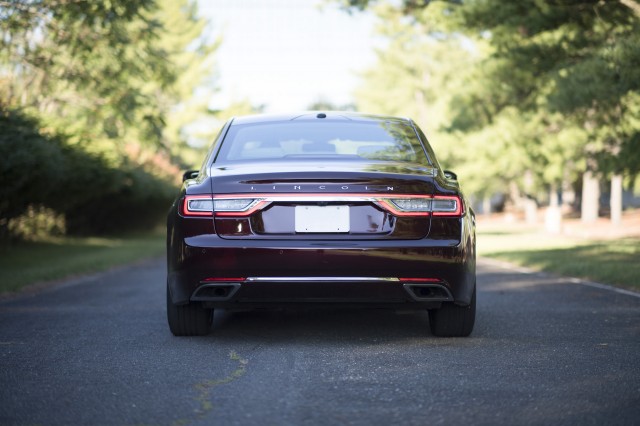 The look and feel of luxury

Both cars play up the luxury look well, with greenhouses—that is, the glass area—that could be facsimiles of one another. The G90's snub-nosed front end is almost anonymous, but its dramatically swept-back tail lamps convey more of a sense of purpose. The Continental is more visually intriguing with subtle bits like door handles just below the window sills and a finely detailed grille adding interest without coming across as gaudy.

Their differences mount inside. The Lincoln feels a little gauche to us on the priciest versions and a bit basic otherwise. It's all down to careful trim selection, but fortunately Lincoln has many choices on offer. The G90 is conventional but shows incredible attention to detail in its materials and button placement.

Neither is a slouch, but again there are some choices to be made in terms of performance. The Continental line starts with a fairly pedestrian 305-horsepower 3.7-liter V-6, but the optional, 335-hp 2.7-liter twin-turbo V-6 feels more at home here. The engine of choice, at least for us, is the 400-hp twin-turbo 3.0-liter V-6. It's the strongest engine on offer and it sends power to all four wheels via a 6-speed automatic gearbox that feels down a cog or two by luxury grade standards.

On the G90, buyers get to pick between a 3.3-liter twin-turbo V-6 rated at 365-hp or a strong, 420-hp V-8, both of which are mated to an 8-speed automatic with the choice of rear- or all-wheel drive. For the most part, it's the G90 that drives more like a true luxury car. It's as composed and refined as a Lexus LS or Mercedes-Benz S-Class, but at a fraction of the price. The Continental reveals its lower-end front-drive roots too often, even with the big V-6 under its hood. 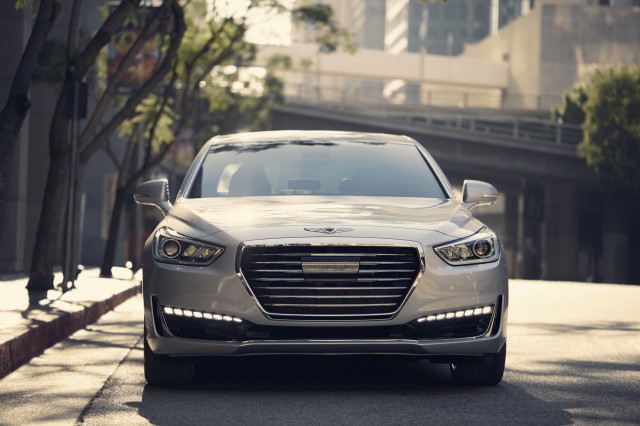 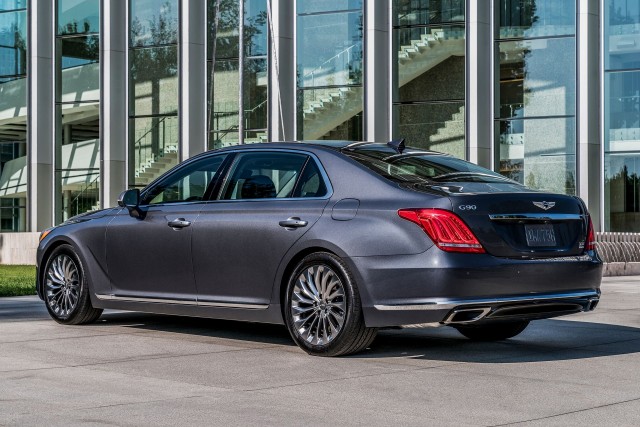 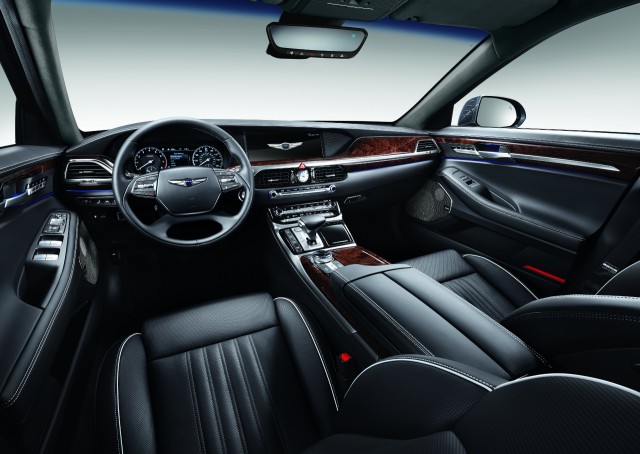 Neither wants for luxury or technology, but again the G90 acquits itself as a genuine luxury car ever so slightly better. The Continental offers a wider range of models, with a dizzying array of packages available for order. The base Continental Premiere is a bit more budget grade with vinyl upholstery, but the Select model ups the ante considerably with hide on its seats, power door closers, active noise cancelation, and adaptive shock absorbers, among other features. All told, a top-end Continental pushes $80,000 with every box ticked, but the mid-$60s buys you one with 400-hp and few missing items.

The G90's build walk is a lot simpler: Premium (V-6) and Ultimate (V-8) models are on offer with a choice of rear- or all-wheel drive. While there's not much customizability here, there's something to be said about finding the G90 you want without having to place an order or wait for one to come into inventory.

The Premium grade piles on nappa leather seats, 22-way power adjustability for the driver's throne, a 12.3-inch infotainment screen, 17 Lexicon speakers, and way more. The Ultimate lives up to its name with power-adjustable and ventilated rear seats with memory, rear vanity mirrors, and LED headlights. It's basically long-haul business class in a G90 Ultimate's rear seating area, minus the flight attendant and warm towel service.

The Continental isn't quite as comprehensive to start, but it can be upgraded with about the same level of tech if the right options boxes are selected on upper levels.  Blind-spot monitors can't be had on the base Premiere; forward-collision warnings are an option, and only on the top Reserve and Black Label trims. It's part of a Technology package ($3,105), which adds surround-view cameras; active park assist; adaptive cruise control; lane-departure warning and lane-keep assist; and forward-collision warnings with automatic emergency braking. We wish Lincoln would democratize these features a little more.

In the end, it's all about choice. The Continental offers far more customizability, which should appeal to some buyers looking for something a little different in this luxury field. But the G90 makes everything easy and, at the end of the day, it comes across as better thought-out luxury sedan.

7.7
Expert Rating
The 2017 Lincoln Continental is a pleasing, contradictory piece that drips with ornate trim, but drives like a more mature MKZ.
7.8
Expert Rating
Powerful, spacious, and luxurious, the 2017 Genesis G90 kicks off Hyundai's new luxury brand in style.

9.0
Expert Rating
An almost unbelievable back seat in some models propels the Continental toward perfection.
Read More
9.0
Expert Rating
Excellent front seats, an abundance of space, and top-notch fit and finish add up to a truly luxurious cabin in the G90.
Read More

9.0
Expert Rating
It's lush, plush, and costs much for top-trimmed cars outfitted with all the features.
Read More
9.0
Expert Rating
A bargain in an elite class, the 2017 Genesis G90 comes loaded with features in a simple model lineup.
Read More

Front Wheel Drive Read Full Specs
Rear Wheel Drive Read Full Specs
Compare Free Dealer Price Quote
With competitive price quotes from multiple dealers, you will be prepared when you meet your local car dealer. Please tell us how to contact you so that dealers can compete for your business!
2017 Lincoln Continental
There are no Lincoln dealers in our network that are located near the ZIP code.
2017 Genesis G90
There are no Genesis dealers in our network that are located near the ZIP code.
Thank you!
We have sent your request for price quotes on the 2017 Lincoln Continental and 2017 Genesis G90 to the dealers you requested. They should be in touch shortly.
The Car Connection's dealer quote process is powered by our partner site CarsDirect.
Your request for a fast, free price quote on a 2017 Lincoln Continental and 2017 Genesis G90 is in process. The CarsDirect Dealer(s) listed below will contact you shortly to discuss your request and to provide a quote. If you have questions now, you can contact the dealer(s) directly using the information provided below or contact CarsDirect's award-winning customer service team at 1.888.CarsDirect (1.888.227.7347) or [email protected]
For your reference, your customer transaction number is .
Tell us a little bit about yourself
Looking for dealers in your area...

*As configured. Excludes taxes, title, license and other customary fees, such as dealer documentation fees, tire and battery disposal fees and, where applicable, finance charges. By clicking on “Get Your Price Quote Now”, you agree to our Terms of Use (including the Supplemental Terms) and Privacy Policy. You further consent to being contacted at the number you provided by CarsDirect and certain participating automotive dealerships, which may include autodials, text messages, and/or pre-recorded calls; this consent is not a condition of purchase or service. Message and data rates may apply.
Have feedback about this experience?
Let us know.
Tags:
2017 Compare Cars Lincoln Continental News Lincoln News
2021
The Car Connection
See the winners »
2021
The Car Connection
See The Winner and Nominees »