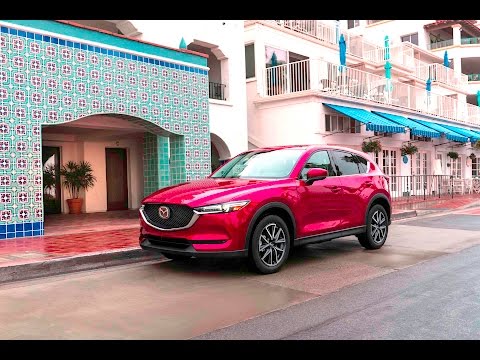 Small SUVs and crossovers are a big deal. The deluge of all-new crossovers this year from Volkswagen, Honda, and others should be proof enough of that.

If you listen to Mazda engineers, the bigger deal is in the small details. The new 2017 Mazda CX-5 is their proof.

Although the second-generation soft-roader may be easily confused with the model it's replacing, there are dozens—perhaps hundreds—of small differences.

We've extracted seven of those changes because seven feels like a good number: days in the week, John Elway's jersey number, dwarfs, colors in the rainbow, seas, deadly sins, and so on.

1. The more engines change, the more they stay the same

Underhood of most of the new CX-5 models on the road will be Mazda's familiar 2.5-liter inline-4 that produces 187 horsepower. That's the same as before, as is the fuel economy, but dozens of little changes—some smaller than a hair—have changed how the engine behaves, and how it drives. Engineers say the new powerplant is more predictable and sharper—all without a turbocharger.

Gone is the underpowered 2.0-liter inline-4 from last year, but Mazda will make available a 2.2-liter turbodiesel later this year that should make the CX-5 a mileage champ on long highway drives. We'll know more about that engine before it goes on sale, which should be later this fall.

2. The stick is stuck

Fewer than one in 20 CX-5 buyers opted for the manual transmission, so it's not surprising that it's gone from the lineup this time around. Instead, the only option is a 6-speed automatic that operates in the background without much of a fuss. Like other automatics found in other small SUVs, the Mazda's autobox has no qualms hitting third gear before you've hit the other side of the intersection. Unlike automatics from other automakers, Mazda's unit holds a gear around a corner, which is nice.

3. Back moves to the front

The CX-5 is finally comfortable for four adults. Although the wheelbase was stretched only an inch, and the overall dimensions haven't changed, rear-seat riders get better seats and a better view in the CX-5.

The rear seats can now recline by 4 degrees—without cutting into available cargo space—and fold flatter for easier cargo loading. Outboard seats can be fitted with available heaters, and 6-footers won't have issues sitting behind other 6-footers.

On both ends of the column, Mazda has made improvements to the steering in the CX-5. For the things you can see: the wheel is a subtly different, asymmetrical shape that's more comfortable to grip with better places to rest thumbs.

For what you can't see: Mazda has directly mounted the steering rack to the suspension, which improves steering feel and response. That kind of layout can make for a steering wheel that likes to shake, but Mazda engineers have tried to tame shimmies through softer springs, lower-friction front struts, and computer wizardry (we'll get to that in a minute).

Interior acoustics are a big deal for the new Mazda CX-5. Inside, the automaker has added enough sound-deadening material to dam the Colorado river, but a custom-made Bose sound system provides amplification where insulation stops.

A center-mounted speaker, called a "twiddler" by Mazda, is proof. Most of the CX-5 is tuned for quiet conversation, but the large sounds emanating from the sound system are unusually great for a car in its price range. Even with the stereo off, we observed a relatively quiet 84 db steady highway drone—that's close to luxury quiet.

Mazda engineers talk about a "water line" in the CX-5, which is where the top half of the car meets the bottom half. That's also the most natural place for elbows to rest in a relaxed position—the astronauts taught us that. Mazda engineers pushed up the armrests and controls to a more comfortable position, while the car's window line has been lowered.

In short, Mazda engineers have made the CX-5 more comfortable and brighter inside—no space suit required.

7. This G likes to regulate

The 2017 Mazda CX-5 will use the automaker's G-Vectoring Control system, which is also found on the Mazda 3. It's a computer-controlled way to help the car corner more smoothly and cut down on head-toss, which is common among softly sprung, high center of gravity vehicles.

The system is slick, but we'll boil it down to the gravy. Depending on speed and steering, the new CX-5 will control how much torque goes to each wheel in an effort to subtly push weight forward to the front wheels where there's better grip and control. The system is nearly imperceptible—but still effective.