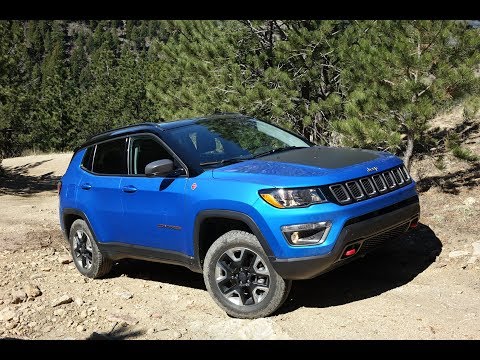 Finally, with the introduction of the all-new 2017 Jeep Compass, the Jeep lineup has something for everyone, everywhere.

The all-new Compass comes as the long-overdue replacement for a pair of crossovers—the classic Cherokee-inspired Patriot and the old, south-pointing Compass—that reached their sell-by date right about the time they were introduced back in 2006. After a day of exploring the Texas Hill Country outside of San Antonio, we're happy to report that the wait has been worth it.

Arriving in dealers around April for a short 2017 model year (confusingly, dealers will also be selling off the last of the old Compasses as 2017, so shop carefully), the Compass comes in four flavors: Sport, Latitude, Limited, and Trailhawk. Think of the first three as conventional, pavement-oriented crossovers to rival vehicles like the Hyundai Tucson, Kia Sportage, and Nissan Rogue Sport. The Trailhawk boasts an extra inch of ground clearance via a suspension lift, skid plates, simulated low-range gearing, and extra traction control modes to make a pint-size off-roader ready to scrabble up a dirt road to a mountain biking trail.

All models feature a 2.4-liter 4-cylinder gas engine rated at 180 horsepower and 175 pound-feet of torque rated at 25-plus mpg combined, depending on the model (details here). Sports and Latitudes come standard with a 6-speed stick shift, a rarity in this segment. Front-wheel drive models offer a 6-speed automatic, while all-wheel drive variants swap that for a 9-speed automatic. Underneath, the Compass is basically a stretched Renegade and not a shortened Cherokee, even though it slots right between the two in terms of size and price (which runs from about $22,000 to $35,000 as detailed here).

Stretching about 173 inches from head-to-toe, that means the Compass is decidedly smaller inside and out than crossovers like the Honda CR-V and Subaru Forester, which are pretty much priced on top of the Compass. Although on paper the Compass is as wide as its rivals, it feels narrower inside with a skinny center console and not much room for a third adult in the second row of seats. There's good leg room front and rear, although the cargo area is unusually high off of the ground and the front seats themselves are a little confining for larger drivers. Wide roof pillars and a high belt line give the Compass a chunky look outside, but they limit outward visibility. Fortunately, a backup camera is standard on all models.

If you've ridden in a Cherokee recently, you'll feel at home inside the latest Compass. Its dashboard is simple with organic shapes grouping controls. Everything felt assembled with care from price-appropriate materials on the models we tested. All models include a screen of sorts, but it takes opting for either the extra-cost 7.0-inch touchscreen in Latitudes or the standard 8.5-inch touchscreen on Limiteds and Trailhawks to net Apple CarPlay and Android Auto integration.

We only had the opportunity to sample Latitude and Limited all-wheel drive models with the 9-speed automatic transmission during our evaluation near San Antonio. Both models are commendably quiet with limited wind rush and, on the Latitude with its standard 17-inch wheels, little road noise. A thickly rimmed leather-wrapped steering wheel promises a degree of sportiness not at all delivered by the Compass, but that's not to say it wasn't a comfortable and confident little 'ute on the curvy roads we encountered. The Compass' steering is just light enough to be easy without requiring extra input to maintain a straight line on a windy highway. Considerable body lean accompanies hard cornering, but aside from a tendency to push its tail out when coaxed, the Compass felt safe and secure in our hands.

The Limited with its optional 19s transmitted more pavement rumble into the cabin and, more importantly, it delivered a far more jittery ride even on Central Texas' smooth pavement. That extra firmness didn't deliver improved handling, however, as the Limited steered just like its Latitude sibling.

Both models were fitted with the 9-speed automatic, which Jeep parent Fiat Chrysler Automobiles has refined considerably since first fitting this gearbox to its vehicles a few years back. It's still a bit sluggish to downshift as it cycles through several gears to keep the engine in its powerband, but in routine driving it is largely imperceptible. The 2.4-liter 4-cylinder won't win a drag race like, say, the V-8-powered Jeep Grand Cherokee SRT, but it provides adequate go in line with competitors.

Where the Compass stands out from this crowded field of rivals (not to mention those with Jeep badges) is with the reasonably priced Trailhawk. Its chunkier looks are accompanied by a softer ride thanks to its taller tire sidewalls, but we found no adverse affect on handling. The Compass itself may not bring much new to the crossover table, but the high value Trailhawk ($29,690 to start) delivers a degree of off-road personality with minimal on-road compromise.