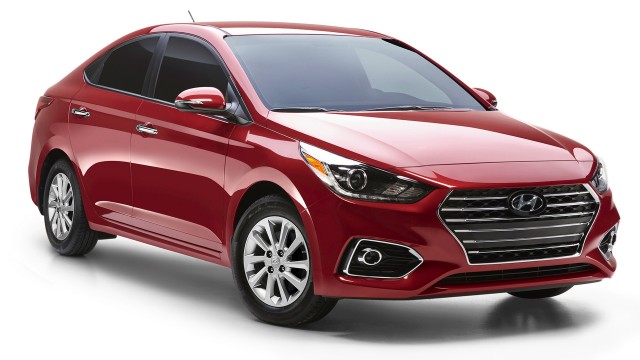 An all-new version of Hyundai's smallest car sold in the United States has made its debut, with what the Korean automaker says is a leap forward in terms of refinement and available safety features.

The 2018 Hyundai Accent that was unveiled at the Toronto auto show is incrementally larger than its predecessor thanks in part to a wheelbase that's about half an inch longer than the 2017 model. In terms of overall length, the four-door sedan variant stretches only about 0.60 inch longer than before, but the four-door hatchback stretches nearly three inches longer.

So far, Hyundai has only released photos of the sedan, however.

Under its new hood sits a 1.6-liter 4-cylinder engine with direct injection that puts out 132 horsepower and 119 pound-feet of torque. It shuttles that power to the front wheels via either a 6-speed automatic or 6-speed manual transmission. Hyundai promises improved fuel efficiency and slightly stronger acceleration. Interestingly, a mode selector will allow drivers to tailor the car's electronic power steering system's heft to their personal tastes—a feature generally reserved for pricier cars.

MORE: How we rate cars

With this redesign, the Accent adopts a more upscale, mature look shared with the company's Elantra compact sedan lineup. A wide grille with horizontal chrome bars gives it the latest version of the company's signature face now seen on nearly all of its models. Inside, it gets a slimmed-down version of the Elantra's dashboard. A 7.0-inch touchscreen equipped with Apple CarPlay and Android Auto compatibility will be offered on certain models, but Hyundai hasn't yet detailed specs for the American market and it has not confirmed weather the small car will be sold here as a sedan, a hatchback, or both.

The Accent makes a big step forward in terms of available safety tech. For the first time, Hyundai will offer automatic emergency braking on its subcompact. The current model scores especially poorly in our ratings for its safety on account of rough results in crash tests and limited optional and standard safety tech above what's federally mandated.

Subcompact cars like the Accent haven't been especially popular with American consumers over the past few years, although they command a larger share of the Canadian market, which explains its debut in Toronto.