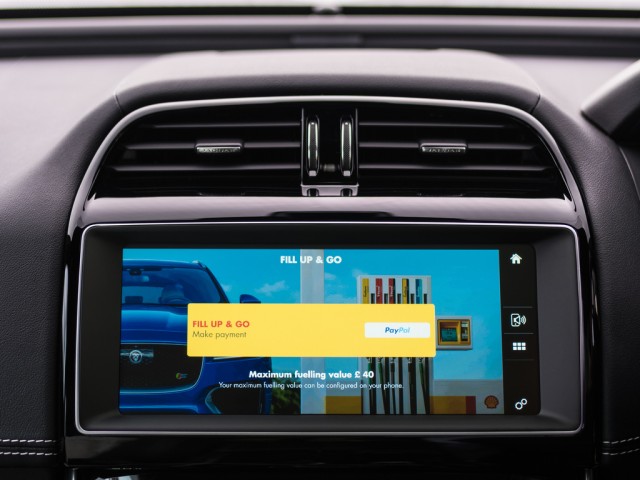 Jaguar and Shell Oil have teamed up to create a new in-car app that allows drivers to pay for fuel without ever swiping their credit card at a gas station.

Instead, drivers can tap their cars' infotainment screens to finish the transaction using either PayPal or ApplePay.

ALSO SEE: Drop in driving and car ownership suggests that America's love affair with cars may be over

The system launches first on 2018 versions of the XE, XF, and F-Pace in the United Kingdom, but Jaguar says it will expand globally thereafter. Later in 2017, Jaguar will add Android Pay capability to the app as well.

After the fuel has been paid for, a receipt shows up on the car's infotainment screen and it sends a copy to the credit card holder's email address.

Sure, tapping a car's screen to pay for fuel instead of swiping a card at the gas pump or going inside the convenience store may seem of dubious value at first, but it does mean that drivers won't be exposed to nefarious devices that can steal credit card information. And it also means that in states like Oregon and New Jersey, where drivers can't legally pump their own fuel, Jaguar owners wouldn't need to provide payment to the attendant directly, which could save some time.

Jaguar also points out that the system could be a boon to drivers who keep track of receipts for expense reimbursement or tax preparation since they're automatically sent to the driver's email.