The 2018 Dodge Durango SRT is a ferocious family hauler 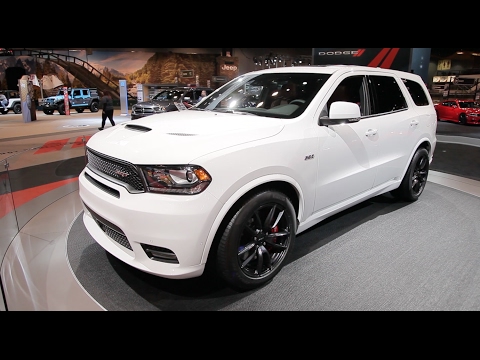 Forget all our advice about nice, practical minivans. What your family really needs, is a 475-horsepower, three-row SUV that can sprint to 60 mph in just 4.4 seconds.

Ignore the inevitably lousy fuel economy (it hasn't officially been rated by the EPA, but the similar Jeep Grand Cherokee SRT comes in at just 15 mpg combined). Don't mind the fact that its 20-inch Pirelli tires offered in summer and all-season flavors probably won't last more than 10,000 miles and run about $450 a corner. And who cares about a suspension so firm that it'll rattle teeth and juice boxes alike in all three rows?

The Durango SRT isn't a plush family cruiser. It's so intense that Dodge includes a day at the Bob Bondurant School of High Performance Driving in Arizona with the purchase of a Durango SRT.

Fine, so maybe most of us would be better off in a Chrysler Pacifica, our Best Car to Buy 2017. But for the discerning few, the Dodge Durango SRT answers a question we've long been asking.

Underneath, the Durango and the slightly shorter Jeep Grand Cherokee are nearly identical. It's not much of a surprise then that the well-received Jeep Grand Cherokee SRT has spawned a three-row sibling. Both share the same 475-horsepower, 470 pound-feet of torque 6.4-liter V-8 engine and aggressively-tuned all-wheel drive system. Needless to say, that's a hefty increase over the 360 ponies cranked out by the non-SRT Durango's optional 5.7-liter V-8 engine.

Helping make the most of that newfound power is an 8-speed automatic, the only gearbox on offer. For 2018, the entire Durango lineup features a new shifter design that replaces last year's much-maligned control knob. A sport exhaust system bellows out the V-8's aggressive rumble.

Underneath, the Durango rides on a lowered suspension with thicker sway bars and its own spring tuning. Special lightweight 20-inch alloy wheels are wrapped in a choice of summer or all-season rubber provided by Pirelli. Big Brembo brakes bring the Durango SRT to a complete stop in just 115 feet from 60 mph.

A total of seven driving modes are included: Sport, Track, Snow, Tow, Eco, Valet, and Street. Sport and Track hold gears for longer and reduce intervention from the electronic stability control system. Snow mode locks the all-wheel drive 50/50 and tweaks the stability control system further. Tow is unique in that not only does it modify shift points for hauling heavy loads, it also activates an active noise control system designed to cancel out some of the sport exhaust's droning. Oddly for a performance vehicle, the Durango SRT offers the highest towing rating in the model's lineup: 8,600 pounds compared to 8,400 for the 5.7-liter V-8.

Valet, meanwhile, detunes the engine to V-6 power to prevent parking attendants from having too much fun.

Inside, the Durango SRT boasts the same three rows of seats as its siblings and also adds a suede headliner, a sports steering wheel, and the availability of upgraded leather and carbon fiber accent trim. A series of special performance pages integrated into the Durango SRT's 8.4-inch infotainment system allows owners to track things like their 0-60 sprints and their gravitational forces as they whip into a corner on the way to soccer practice. With special front and rear bumpers, the Durango SRT isn't too subtle about its performance intentions outside, either.

There's still room for seven, which should make the Durango SRT an easy sell to your practicality-minded better half when it hits the market during the fourth quarter of 2017.