The 2018 Hyundai Elantra GT went to finishing school in Europe

The Hyundai Elantra GT nameplate returns to the automaker's lineup for the 2018 model year with a decidedly more Continental flair than the comparatively workaday Elantra sedan.

That's because instead of simply being a hatchback version of the Elantra four-door, the all-new Elantra GT is actually a rebadged version of the European Hyundai i30. What's that mean for consumers in the States? A more upmarket interior and a chassis designed to rival Europe's best make it a different breed of compact car than the Elantra sedan.

Speaking of performance, it's the more decidedly sport-oriented chassis that was developed at Hyundai's new facility outside of the demanding Nurburgring race track in Germany that helps set the GT apart from the sedan. That's the same facility where every European performance brand has tested its cars for the last couple of decades and it's something of a legend in its own time.

The 2018 Elantra GT will be offered with a choice of engines. Base models come with a 162-horsepower 2.0-liter 4-cylinder engine, while the GT Sport makes use of the 1.6-liter turbo-4 rated at 201 hp and 195 pound-feet of torque. That latter engine is plucked from the Elantra Sport sedan and it's offered with a choice of 6-speed manual and 7-speed dual-clutch automatic gearboxes while the base engine comes with either a 6-speed stick or a 6-speed automatic.

Underneath, the Elantra GT and GT Sport offer different takes on the same flavor. The base GT's torsion-beam rear axle is a relatively simple design typical to a compact hatchback, while the GT Sport makes use of a more sophisticated multi-link setup that should improve road-holding. The GT Sport also features upsized brakes and 18-inch (instead of 17-inch) alloy wheels.

That's all part of the fact that the Elantra GT Sport's chassis was developed to compete with cars like the Volkswagen GTI and Ford Focus ST. While the GT Sport comes up a little short on power, if the Elantra GT is any indication, it'll also cost less than those two established rivals. 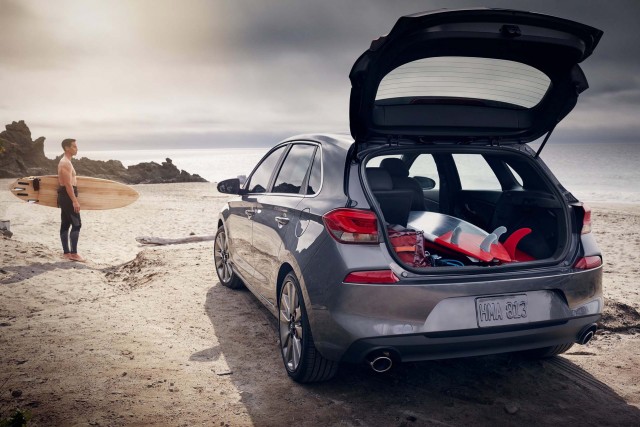 With its hatchback design, the Elantra GT will not only be a sportier sibling, it'll be also more utilitarian. Hyundai says it paid extra attention to the Elantra GT's cargo area, which offers 96.5 cubic feet of overall passenger volume, 55.1 cubes of maximum cargo space, and just shy of 25 cubic feet of space with the second row of seats upright.

Those are impressive figures that should put the Elantra GT toward the top of its class.

Additionally, the Elantra GT has its own interior distinct from the sedan that Hyundai says is composed of upmarket materials. Its 8.0-inch infotainment system sits in a separate panel that pops up from the center console and includes Apple CarPlay and Android Auto. Navigation is optional, as is wireless smartphone charging. The optional navigation system is an all-new system, Hyundai says, which features a faster processor than the outgoing model as well as no-cost traffic data.