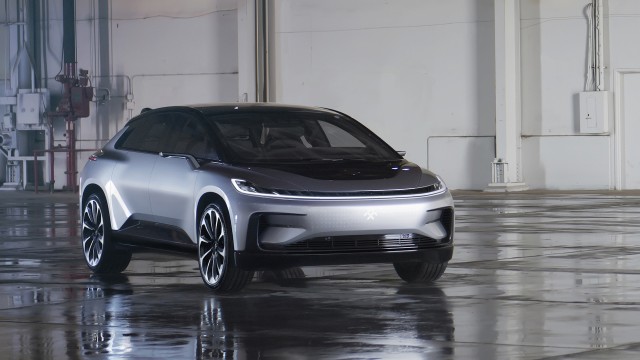 If you're one of those folks who's excited about electric car startup Faraday Future, we have a bit of bad news: the company has hit the brakes on its production plans. It has pushed back the timeline for building out its $1 billion Las Vegas-area plant, and it's dramatically pared down its lineup from seven vehicles to two.

For most of you, though, the only "news" in that first paragraph is that Faraday Future isn't heading to bankruptcy court. Yet.

The past year hasn't been especially kind to Faraday. It received a fair amount of press in January 2016 after revealing a 1000-horsepower prototype, and it turned heads again in April, when it broke ground on a massive, 900-acre, $1 billion manufacturing facility in the Nevada desert.

Since then, however, news from Faraday has been alarming, to say the least.

Many people began to wonder if Faraday had a future at all.

Finally, the folks at Faraday have acknowledged that they're facing a few problems, and they've put together a plan to address them.

First and foremost, Faraday is scaling back the size of its Las Vegas-area plant and slowing the timeline for its construction. What was once to be a 3 million square-foot facility will now measure closer to 650,000 square-feet. A timetable for completing the smaller plant hasn't been announced, but it may not open its doors until 2019 or later.

When that facility is up and running, it will have a significantly reduced bandwidth. In Faraday's heady, early days, the company bragged that its plant would be open by 2018 and turn out 150,000 electric cars a year. With the smaller plant comes smaller capacity--more like 10,000 vehicles per year.

That doesn't mean, however, that Faraday's inventory will be limited to 10,000 vehicles. Insiders report that the majority of Faraday's cars will be produced in China by Faraday's sibling, LeSee. How many of those cars the company plans to export to the U.S. remains unknown--doubly so in light of recent discussion around potential border taxes to be levied on vehicles imported to the U.S.

Also, company sources report that Faraday's initial portfolio of seven vehicles has been reduced to two: the FF91 and a smaller Tesla competitor, the FF81.

Will Faraday's new-found level-headedness hold? Will the company put someone in the CEO's office who's capable of leading employees, managing costs, inspiring passion in Faraday's products, and setting realistic, achievable goals?

We have absolutely no idea, but we'll be sure to keep you posted.