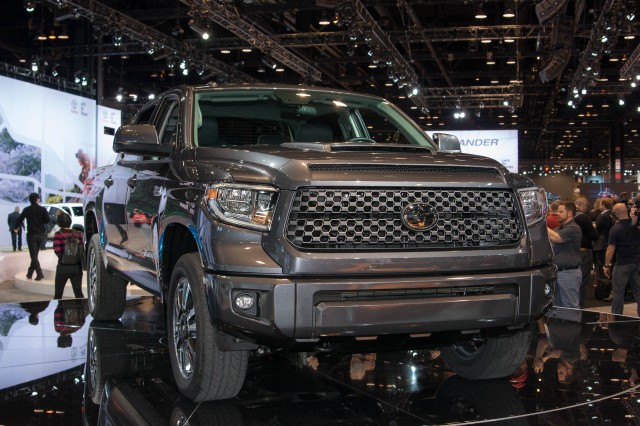 Toyota's two biggest vehicles are set to gain some important collision-avoidance tech as standard for 2018.

The automaker announced at the 2017 Chicago Auto Show a number of modest updates for the Sequoia SUV and the Tundra full-size pickups. They're not quite full redesigns or even mid-cycle updates like we may have expected, but the 2018 versions will now come standard with automatic emergency braking, adaptive cruise control, lane departure alert, and automatic high beam headlights.

All those features are bundled under what the automaker calls Toyota Safety Sense-Plus, or TSS-P, and it's the same tech Toyota made standard on almost all of its lineup for 2017.

Otherwise, the two trucks will be offered with a new TRD Sport trim level designed to give them a sportier look and sharper handling. The exact content of the TRD Sport package varies slightly between each truck, but there's a nice combination of show and go that may boost these dated models' appeal.

On the Tundra, the package includes special Bilstein shock absorbers underneath and TRD front and rear sway bars. It looks the part with a monochromatic appearance outside, a hood scoop, model-exclusive 20-inch alloy wheels, and a mesh grille. The Tundra TRD Sport will be offered in a choice of five colors.

The rest of the Tundra lineup sees some modest updates as well, like a new mesh grille on some models and a billet-look design for others. Limited and Platinum models gain LED headlights as standard, too.

All models down to the work-oriented Tundra SR are set to include TSS-P as standard equipment.

Toyota hasn't said if the Tundra receives any powertrain or interior updates and the automaker is holding back pricing until later this year when the truck goes on sale.

The Sequoia, meanwhile, is even more overdue for an update since it has only been mildly updated since hitting the market in late 2007, but a full makeover will have to wait.

For now, the Sequoia's big news is its TRD Sport package. Like the Tundra, it will feature Bilstein shocks and special TRD sway bars. It'll stand out a bit from its siblings with its own 20-inch wheel design and a front grille and bumper look seemingly inspired by the Toyota Highlander.

Inside, the TRD Sport features black fabric upholstery (with leather as an option), a TRD shift knob, and TRD floor mats.

The Sequoia will otherwise soldier into 2018 with only a few updates for its other trim levels—SR5, Limited, and Platinum. Aside from standard TSS-P, all models now come with LED headlights and they feature revised grille and front bumper designs outside with a reworked center console highlighting things inside.