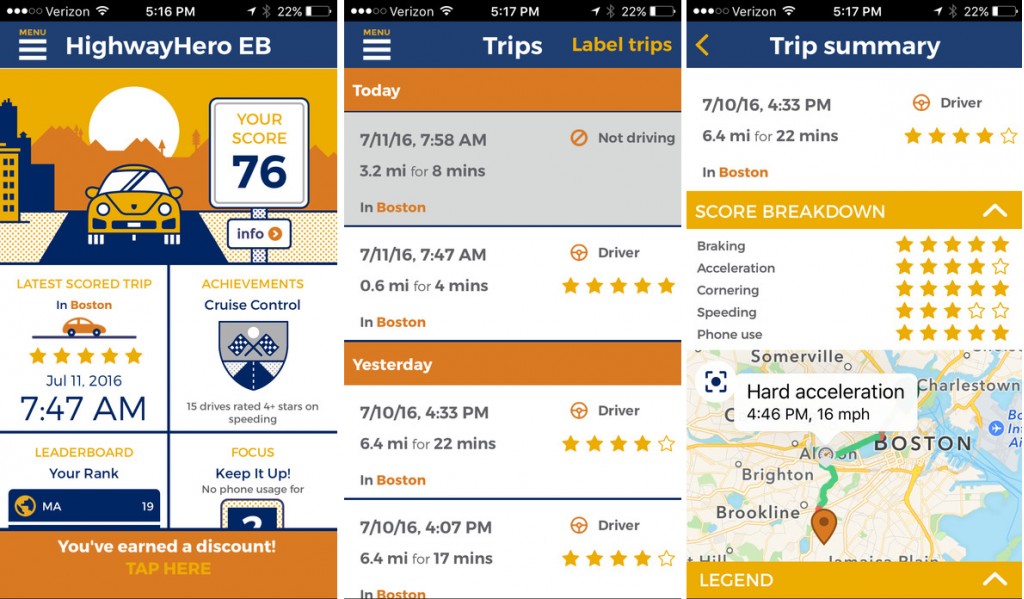 We learned a lot of interesting things in the first decade of the Smartphone Era.

We now know that, though nearly all of our friends have mobile phones, few like talking on them. We've learned that "freemium" is never free. And of course, we know that if you really want to make bank in the App Store, turn a mundane task into a game.

Liberty Mutual has taken that last truth and run with it, making everyday driving a game that the entire family can enjoy--and maybe cutting your auto insurance premiums in the process.

Over the past couple of months, the company has two apps, one called HighwayHero, the other called RightTrack. Though they're targeted to slightly different users, they function essentially the same, using smartphones to monitor and assess users' driving habits.

HighwayHero is open to anyone, whether or not they're clients of Liberty Mutual. It tracks users as they drive, noting how hard they brake, how fast they accelerate, and of course, how often they use their phones behind the wheel. It then assigns scores ranging from one to five stars in each tracked area. Users can share their scores with friends and family, checking leaderboards to see who's performing the best.

Of the two apps, HighwayHero is the "gamier". It turns users into better drivers by rewarding them for good behavior and making them competitive.

RightTrack, on the other hand, works through negative reinforcement. It's less about beating others' scores and more about instilling safer driving habits by offering the possibility of lower insurance premiums.

At heart, it's nearly identical to HighwayHero, measuring factors like mileage, acceleration, and when a person drives (e.g. during the day or late at night). It also tracks how far they drive.

However, RightTrack is more of a limited-time test drive: it measures a driver's habits over the course of 90 days, after which it assesses the driver and offers her a discount (or not).

Put another way, HighwayHero is a "gateway" app designed to hook people on the idea of safer driving. Liberty Mutual hopes some of those folks will become customers, at which time they'll be able to use the RightTrack app to save some cash.

HighwayHero is available nationwide for both Android and iPhone. RightTrack is in its pilot phase: though smartphone owners can download the app now, it won't begin offering discounts to drivers until next month. (It will launch in Colorado, Kentucky, Ohio, Tennessee, and Wisconsin, with a few more states to be added by the year's end.) You can find it on Google Play and iTunes.