Hot on the horseshoes of the 2018 Ford Mustang coupe's debut earlier this week, the automaker has shown off an updated Mustang convertible.

Like the coupe, the droptop dispenses with the formerly-standard V-6 engine, leaving a 2.3-liter turbocharged 4-cylinder and an updated 5.0-liter V-8 engine. Both engines promise a little more power and torque than before, although Ford hasn't specified figures just yet.

Additionally, both engines will be available with a 10-speed automatic—developed with arch-rival General Motors—that takes the place of 2017's optional 6-speed. A 6-speed manual is again standard, although the unit used on the Mustang GT has been beefed up a bit. 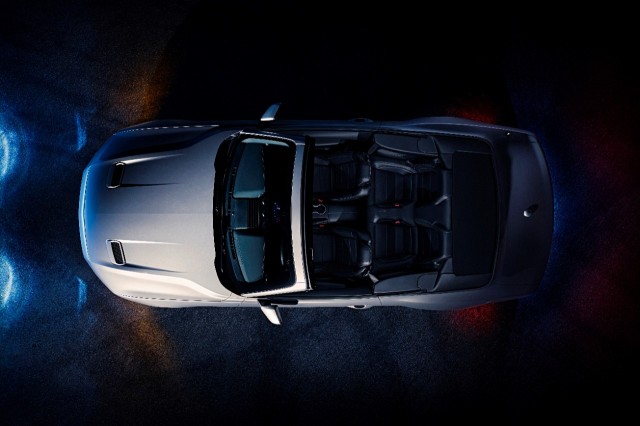 Ford also reshaped the way the Mustang looked, giving more sinewy proportions thanks to some revisions to its fenders and front and rear fascias. A trio of new paint colors have been added to the lineup as well. Inside, some materials are a step above what was offered last year—and there's some new technology worth a note.

For one, Ford has made an LCD screen optional to replace the car's analog instrument cluster. The configurable screen can bet set to display several different modes and it serves as a gateway to many of the car's performance and convenience settings. Also, the Mustang convertible will now be available with automatic emergency braking with pedestrian detection—a ponycar first.