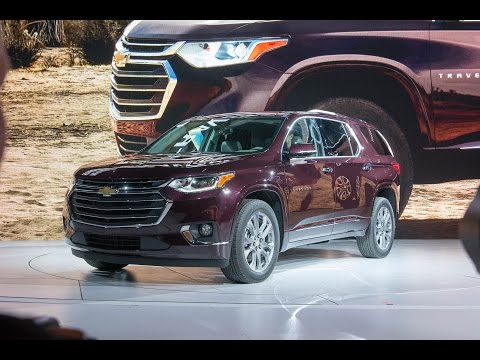 The Traverse has been conquering the mountain of family duty since it arrived nearly a decade ago. Now, the 2018 Chevrolet Traverse looks the part.

The three-row family crossover from Chevrolet is now bigger and more spacious, but the exterior looks are what we're all talking about.

Stylistically, at least, the Traverse looks closer to the Tahoe now than the smaller Equinox. The Traverse adopts some styling cues from Chevy sedans—namely, we see some Impala along the sides. The SUV also grows a sharper snout and a taller grille opening than the outgoing model.

The inside is decidedly more upscale this time around with a large center touchscreen, upgraded dash materials, and a new High Country trim that sits atop the range. Apple CarPlay and Android Auto are standard on all models.

Chevy promised more access all the way around, including a sliding second row that offers better access to a larger third row. The Traverse boasts nearly 34 inches of third row leg room, among the best in its class. The second and third rows tumble down to open up to 98.5 cubic feet of storage for home improvement store runs.

GM dropped in a upgraded V-6 under the hood that makes more than 20 hp more than the outgoing engine, and it's mated to a new 9-speed transmission to help wring out every mile per gallon. Chevy says the V-6, 9-speed combo should manage up to 25 mpg on the highway and tow up to 5,000 pounds.

The Traverse now gets a turbo-4 that's new for this year. The 255-horsepower 2-liter four will be on RS models, but won't be necessarily more efficient. It's highway rating is lower and it'll be mated to front-wheel drive only, something shoppers in sunshine states probably won't mind.

Chevy says the new Traverse will arrive this fall, but won't tell us how much it'll cost yet. Stay tuned, I'm sure we'll want to know more about this bigger SUV.