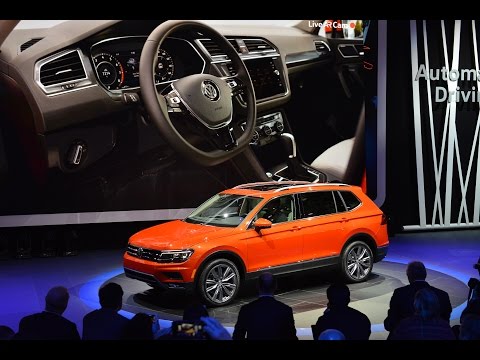 Conservative is the name of the game, more room inside is the Tiguan's new aim.

The 2018 Volkswagen Tiguan is finally here, and it's now a three-row crossover. Although we need to talk about that in a minute.

The new Tiguan borrows a lot from the Atlas, which means it's instantly recognizable as a Volkswagen, and therefore conservative. LED daytime running lights, notched grille, and slotted five-spoke wheels maintain VW’s rugged, understated styling. Volkswagen notes car’s 26-degree approach angle for off-roading purposes, but we doubt it will challenge, say, a Toyota 4Runner when it's time to clamber up a mountain.

The 2018 Tiguan  stretches 10.7 inches longer from bumper to bumper than the one it replaces. It stretches just slightly longer than the Nissan Rogue but is considerably smaller than the GMC Acadia.

Under the hood, the Tiguan is 2.0-liter turbocharged 4-cylinder gasoline engine making 184 horsepower and 221 pound-feet of torque. An 8-speed automatic transmission pushes power to either the front wheels or all four if you opt for all-wheel drive.

The new Tiguan is considerably larger than the one it replaces, more than 50 percent, and now features a short third row, similar to the Nissan Rogue. Like the Rogue, it's a third row that looks suitable for only really occasional duty for passengers who, hopefully, are still into Hatchimals. In other words, it's small. Real small. It's standard on front-drive models, optional for all-wheel drive models.

The Tiguan boasts a digital cockpit, which is a high-resolution screen instead of standard gauges. It's the same tech that will be available on the automaker's updated Golf lineup for 2018 as well.

That should prove useful for Volkswagen loyalists who've waited a long time for the new Tiguan. At least we can get excited about the tech.