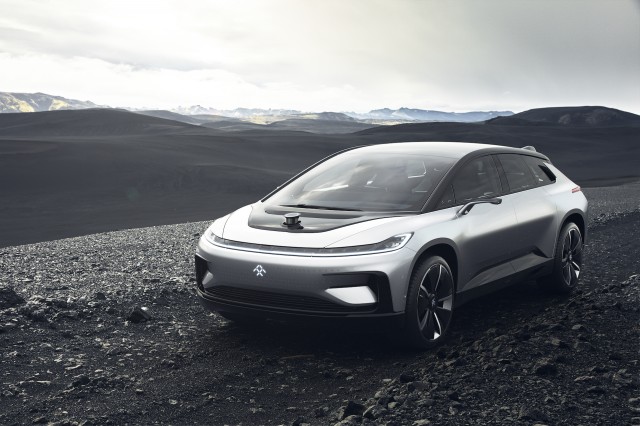 The past few months haven't been kind to Faraday Future, the new electric-car company launched by Chinese entrepreneur Jia Yueting. An aggressive start-up plan has left the company in a precarious financial position, causing many to question whether Faraday has a future at all.

To some observers, the debut of Faraday's new prototype was a make-or-break moment: either the car would sink, making it increasingly unlikely for Faraday to win over consumers and investors, or it would swim, calming the waves of negative press.

Yesterday at the Consumer Electronics Show, that prototype finally rolled onto the stage (though it didn't roll off it quite as easily). Can the FF 91 give Faraday Future the momentum it needs to sail past this rough spot?

We'll let you be the judge of that.

Bumps in the road

No question about it, Faraday's plans have been ambitious. Rather than work with another automaker to develop its battery-electric vehicles or rehab an existing factory to produce them, Faraday chose to build a brand-new manufacturing plant at a cost of $1 billion. It was a big gamble, which seemed appropriate given the plant's location outside Las Vegas, not far from where Faraday debuted the FFZERO1 concept at last year's CES.

Faraday said that the factory would produce cars by 2018--a very aggressive timeline. Even more shocking was the fact that in June, the company expressed interest in building a second facility in California, less than two months after the groundbreaking ceremony in Nevada. (Keep in mind that until yesterday, Faraday had only produced one car, and it wasn't intended for production.)

Faraday execs began hedging their bets almost immediately. The company's vice president for global manufacturing, Dag Reckhorn (who remains at Faraday despite some high profile departures last month), said in April that although the company hoped to open its Las Vegas plant by 2018, no specific date had been set.

In September, construction started, but by October, contractors were publicly complaining that Faraday hadn't paid them a dime. Though the automaker and the contractors tried to put a brave face on things, the problems were clearly as bad as everyone imagined--possibly worse.

And so, in November, construction ground to a complete halt. It has yet to re-start.

Yesterday, Faraday Future showed off the FF 91 prototype. While it's still not a production-ready car, it's admittedly more conventional-looking than the FFZERO1 concept--though that's not saying much, since the FFZERO1 was an attention-grabbing supercar.

Does the FF 91 inspire the same passion as, say, the Tesla Model S does, or the Tesla Roadster before it? Reviews are mixed.

Clearly, it looks high-tech--the LED running lights, the blacked-out pillars, and the now-ubiquitous, ultra-thin side-view mirrors (actually cameras that display on the FF 91's interior) make it clear that this is a Car of Tomorrow. The FF 91 also boasts a lidar puck that pops up from the hood when the car is in autonomous mode.

The FF 91 also has a self-parking feature that's a bit similar to Tesla's Summon feature. Owners can retrieve their vehicles from a garage or parking spot via a smartphone app; then when they're done, they can exit the vehicle and send it to park itself again. The CES demo of that feature by Yueting (called YT) didn't go off so well, though.

Faraday Future says that the FF 91 will be produced for consumers, though naturally, it hasn't said when the cars will be available or how much they'll cost. If you're seriously impressed by the prototype, you can put down a $5,000 deposit today.

The FF 91 is a major accomplishment to be sure. Untold numbers of people spent untold hours building a very powerful electric vehicle equipped with some very impressive technology. For that alone, it deserves a good look.

As for whether the FF 91 is enough to give Faraday the momentum it needs to build a base of rabid fans, grow its capital, build its plant, and actually produce vehicles...well, that's bigger question.

In any industry, success depends not only on building a good product, but also on getting consumers to want that product. Apple has done a great job of this with its sleek, sexy designs and its ads that focus not so much on the products themselves, but on what those products allow consumers to do and how they make the world a better, happier place.

By contrast, Microsoft lost out on the mobile revolution--in part because it was late to the game, but also because the company always seemed more interested in telling us about Windows Mobile's many features instead of how those features can improve our lives.

The obvious comparison for Faraday Future lies in Tesla, which, unlike now-dead Coda, V-Vehicle, and other electric-car startups, has so-far managed to succeed (well, mostly). It's done that by creating great-looking products, thinking well outside the box, being audacious, and perhaps most importantly, having a charismatic evangelist-in-chief as its CEO, the outspoken Elon Musk.

From where we sit, this is where Faraday falls behind. The FF 91's design is interesting but severe, and it lacks the widespread appeal of, say, the Tesla Model S. Apart from a bigger battery pack, it doesn't appear to do anything that other high-tech rides already do.

In other words, the FF 91 doesn't feel terribly special yet. It feels like a good competitor, but not unique.

That trouble is compounded by the fact that Faraday hasn't yet explained what it "stands for", other than making money. Tesla, on the other hand, has made that abundantly clear thanks to inventions like the Supercharging network, the Powerwall, and other items for the home created in conjunction with SolarCity. Tesla is leading a revolution.

And of course, Faraday doesn't have a high-profile visionary leading the charge. Yueting may play well in China, where he's better known. At CES, however, Yueting's speech didn't do much to inspire passion.

Take a look at the FF 91 overview video above and share your thoughts about the car below. For more on the FF 91's tech specs, check out this handy overview at Motor Authority.