Driving in the US is more dangerous than in Kenya, Romania, or Algeria 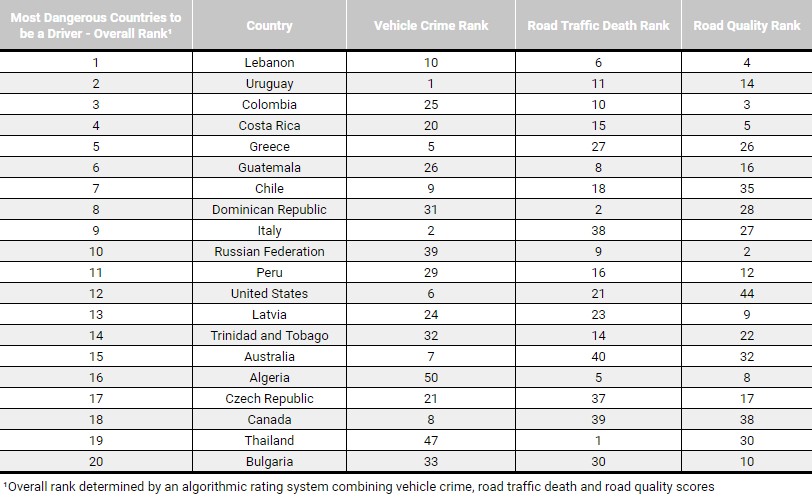 World rankings of most dangerous countries for drivers (via GPS)

Given America's extensive system of highways and byways, it's easy to forget that many of our roads aren't as safe as they seem. As we've reported many times before, U.S. streets are in a serious state of disrepair--and don't get us started on bridges.

America isn't alone in that, though. To prove it, Australian fleet management company Global Positioning Specialists recently undertook a global survey to determine where drivers face the most serious risks.

In its analysis, GPS considered three major hazards for motorists:

Each of the 57 countries included on GPS' survey was rated on those criteria and ranked accordingly. Rankings in the three areas were then averaged to provide an overall ranking for each country.

As you can see in the graphic above, Lebanon fared worst on the GPS survey. It had the dubious honor of being ranked in the top ten in all categories, with the tenth-worst stats on vehicle theft, sixth-worst on roadway deaths, and fourth-worst on road quality.

Further down the list, the U.S. was ranked number 12. Interestingly enough, America fared pretty well in terms of road quality. In fact, 43 countries scored worse than the U.S. did. (Which, given what we know, isn't great news about the rest of Planet Earth's roads.) America did moderately well on roadway deaths, too. However, the U.S. landed in the number six spot for vehicle crime, which was enough to put us near the top of the list.

At the very bottom of the list were a handful of countries we tend to think of as hugely efficient and/or ruthless, depending on your point of view. Singapore was rated as the safest country for drivers, followed by Switzerland, United Arab Emirates, Japan, and Austria.

And for reference: the UAE had the best scores on road quality, Sweden fared best on roadway deaths, and Azerbaijan had the lowest number of vehicle thefts on the study.

You can view and download a spreadsheet of all the data here.