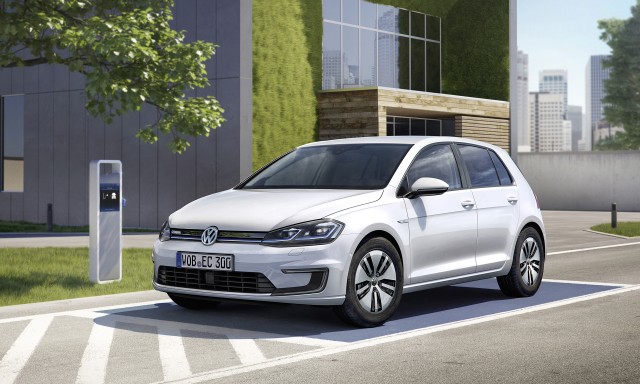 You wouldn't think that more power would equate to a greater driving range, but Volkswagen's updated-for-2017 e-Golf boasts just that unlikely combination.

The German automaker's electric car sees its battery energy capacity increased from just 24.2 kilowatt-hours to 35.8 kwh, which improves its range from a so-so 83 miles to a more impressive estimated 124 miles.

That's on par with the upcoming Hyundai Ioniq and ahead of rivals like the Nissan Leaf (now at 107 miles for the entire lineup) and BMW i3 (114 miles). It's still way off of the Chevrolet Bolt, however, which comes in at a segment-leading 238 miles of range. So impressive is the Bolt's range that we named the model our Best Hatchback to Buy 2017.

Yet there's more to just a larger battery in the e-Golf. Under its hood now sits a 134 horsepower electric motor, representing a 19 hp improvement over the 2016, and torque grows from 199 pound-feet to 214, which altogether shaves about a second off of the electric hatchback's 0-60 mph sprint (down to 9.6 seconds, VW says).

Both the SE and SEL Premium trim levels now include as standard a 7.2 kilowatt on-board charger.

All models will stand apart visually with the same updates VW announced for the rest of its Golf lineup in Europe recently. Inside, the model features revised upholstery and trim. 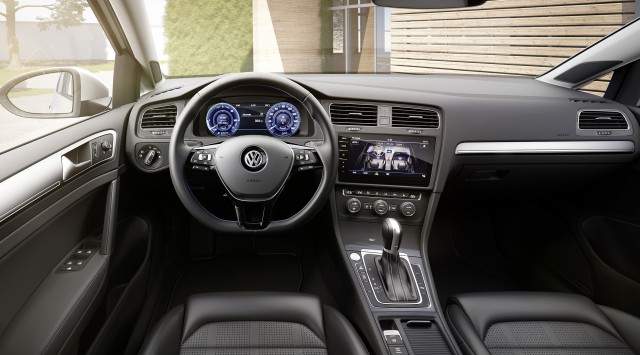 The e-Golf becomes the first Golf in the United States to be offered with the company's updated infotainment system and an LCD screen that replaces its conventional instrument cluster. A 12.3-inch screen sits ahead of the driver to display several pages of on-the-go information, including digital representations of analog gauges.

In the center stack, meanwhile, a 9.2-inch glass display features a gesture control system that allows drivers simply wave their hands in specific motions to work their way through the screen's menus.

Finally, VW is making automatic emergency braking and collision warning optional on the SEL Premium, where it is bundled with the aforementioned 12.3- and 9.2-inch screens.

Look for the e-Golf's design updates and its huge technology leap forward to make their way to the rest of the Golf lineup soon.