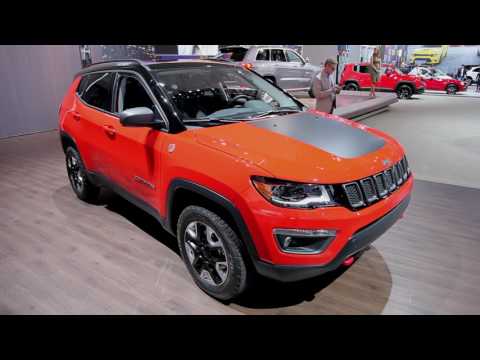 Jeep builds a crossover SUV for just about every size. The Renegade's a small; the Grand Cherokee's the extra-large.

The medium label? That's what Jeep will apply to this new utility vehicle, starting next year.

Jeep wants you to ignore the Compass that's on showroom floors right now. It's old news—and it's not nearly as exciting as this new global SUV.

READ: The 2017 Jeep Compass manages to actually look like a Jeep

Looking like a Grand Cherokee that got shrunk in the dryer, the new Compass mashes up an angular profile with a seven-slot grille, strong sculpted sides, and a tidy rear end.
Inside, the Compass sports a softly sculpted interior with an available 8.4-inch touchscreen infotainment system, and lots of storage.

The new Compass is powered by a 2.4-liter inline-4 producing 180 horsepower. Depending on the model, power is sent to either the front or all four wheels via either a 6-speed manual, 6-speed automatic, or 9-speed automatic transmission.

The Compass can be fitted with one of a few four-wheel-drive systems, one of which boasts a 20:1 crawl ratio with up to five driving modes. There’s even a Trailhawk model that’s Trail Rated.

MUST SEE: Motor Authority's hits, misses, and holds from the LA auto show

It's probably headed for lots of strip malls and day cares, just like rivals like the CR-V and Escape. But the Compass doesn't skimp on the real active lifestyle stuff—you know, infotainment, audio, and cameras. Touchscreens range from 5.0 inches to 8.4 inches. The Compass has Bluetooth, Apple CarPlay and Android Auto, navigation and a rearview camera.

Jeep isn’t talking pricing or fuel economy yet, but the new Compass will hit dealerships later next year.