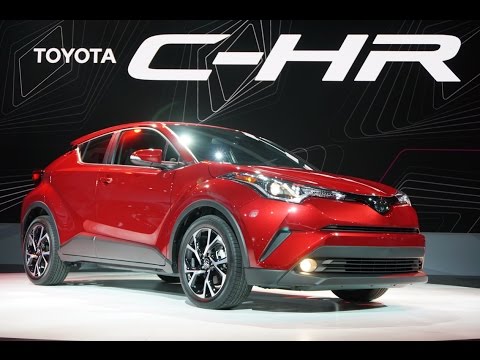 Nissan has the Juke, Chevy has the Trax, Honda the HR-V. Where's Toyota in the subcompact crossover race?

Nowhere now--but that's about to change with this vehicle--the 2018 Toyota C-HR.

We've seen this concept before--a few times it's been shown as a Scion. Now it's set to wear Toyota badges when it arrives in the U.S. In the spring of 2017.

The C-HR has a sharply creased and complex body, with lots of strong curves and eye-catching LED daytime running lights. Toyota fills the wheel wells with 18-inch wheels and tires and they claim the rear spoiler is functional. All that downforce you need for daily commutes, I guess. One of the coolest design features? The rear door handles which your kids won't be able to reach.

Inside, the C-HR has a dash that’s slightly canted towards the driver to give it a more sporty feel. A 7-inch infotainment screen sits on top of the dash, tablet-style, like the Germans do it. A 4.2-inch information display sits in the gauge cluster.

While the rear seats fold 60/40 Toyota isn't disclosing cargo space, yet. While it's definitely not packaged as well as the HR-V, it's probably about on par with the Juke.

Under the hood of the CH-R, Toyota slots a 2.0-liter inline-4 producing 144 horsepower. Power goes to the front wheels through a continuously variable transmission. Toyota tells us there’s a sport mode which has the CVT simulate a 7-speed automatic transmission. Important to note all-wheel drive is not available.

Toyota also stocks the C-HR with technology. On the features list are a rearview camera and Bluetooth. If you want Apple CarPlay or Android Auto, you'll have to drive something else, as Toyota says it's doing its own infotainment, thanks.

Toyota hasn’t talked pricing or fuel economy yet, but the C-HR will go on sale sometime in 2017.