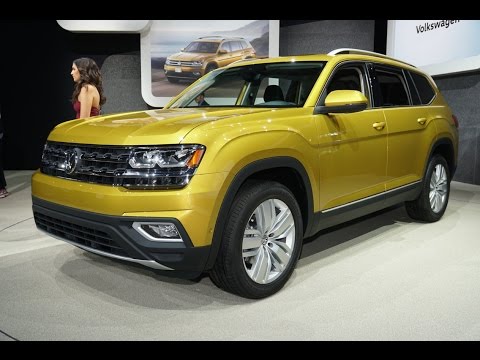 Volkswagen needs a hit these days--and they need more SUVs to compete in America.

This year, the German automaker will land a one-two punch with new utility vehicles. Soon, there will be a new Tiguan.

If this new Volkswagen looks familiar, that’s because it’s heavily based on the Crossblue concept from few years ago. There’s quite a bit of Jeep Grand Cherokee in the design if you squint a bit. A horizontal grille and headlights, big fender bulges that act like shoulders, and a horizontal rear dominate the design.

Inside, well, it looks like a slightly updated Passat. It’s nothing to write home about, but it’s functional.

Key among crossover SUVs is their functionality and the Atlas has a slew of cupholders, a folding second-row and third-row seat, and lots of space.

An in-dash digital instrument cluster seems like an adaptation of Audi’s Virtual Cockpit interface, and Apple CarPlay along with Android Auto will be available.

Buyers will have a choice between a turbocharged 2.0-liter inline-4 with 230 horsepower or a 280-horsepower 3.6-liter V-6 and both are connected to an 8-speed automatic transmission.. Front-wheel drive will be standard, and selectable all-wheel drive will be available, but you’ll have to opt for the V-6 engine to get that.

Active and passive safety equipment will be optional including forward collision warnings and automatic emergency braking, along with Volkswagen’s suite of adaptive cruise control, lane-keep assist, and blind-spot monitors.

Pricing and fuel economy have yet to be announced but the Atlas will hit Volkswagen showrooms in the second quarter of 2017.