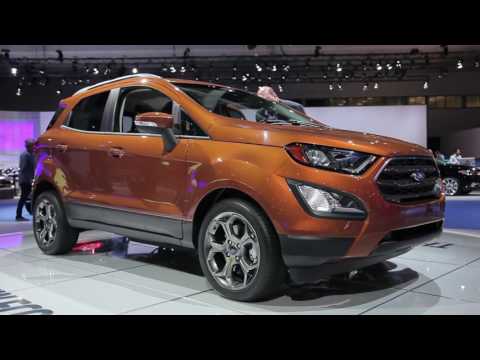 Make way for a new wave of Ford SUVs and crossovers. Some of them from unlikely locations.

The new Ecosport made its North American debut at the 2016 Los Angeles auto show. Its the first of a slew of crossovers—or SUVs—from Ford that'll be released over the next four years.

It's been on sale around the world since 2003, but the Ecosport won't hit the streets stateside here until next year, when a new-generation version makes its debut. When it does, it's going to be the first mainstream car produced in India for the U.S.

Like many Ford models, this Ecosport is as much about lifestyle as it is about the car. Power plugs, touchscreens, and connectivity are all the big selling points here. Space, size, and capability maybe come later. An available 10-speaker audio system will fill the tiny confines with enough sound to wake the dead, and Ford's Sync 3 system is a competent controller with Apple CarPlay and Android Auto.

We're not clear on what kind of power the Ecosport will have when it goes on sale, but we know that the base engine will be a turbocharged 3-cylinder with front-wheel drive, or a 2.0-liter 4-cylinder with available all-wheel drive.

Ford's all-wheel-drive system for the Ecosport is best considered as a "light" version: there's no way to lock in all-wheel drive, and there's no low-range function either. Ford hasn't even yet said how much power it'll shift to rear wheels when it's starting to slip.

But even with small engines, the car is big on ideas. Even though it's late to the game, it'll compete against the Mazda CX-3, Honda HR-V and Chevy Trax.

All of those mini-'utes manage more than 30 mpg on the highway and a combined rating in the high-20s. Like the other numbers, Ford hasn't given us an estimate on what the Ecosport's final figures will be, but with a thrifty 3-cylinder on the base model—we're guessing at least those numbers or bust.

When it goes on sale next year, it'll be available in four trims starting with S then up to SE, SES and Titanium. Pricing hasn't yet been announced for the Ecosport, but we expect it to tuck in short of where the Escape starts, which is just over $24,000.

And yes, there are more crossovers and SUVs on the way for Ford including a Bronco, perhaps a hybrid and a bigger 3-row SUV, similar to the Everest, which it sells worldwide. The Ecosport is the first.