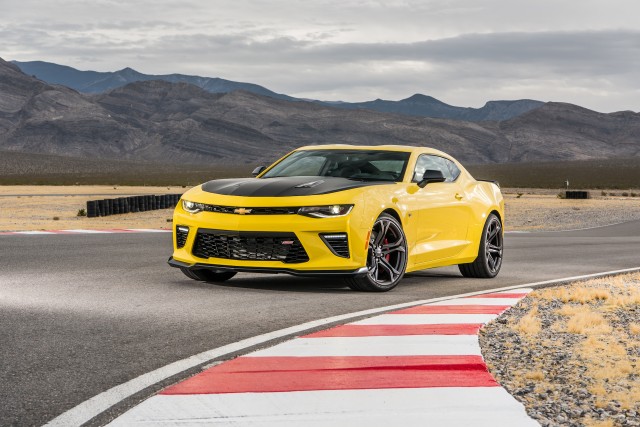 Performance is a trait we rate on every vehicle here at The Car Connection, but some vehicles do it better than others.

Far, far better. We've given out our share of 10s this year for high-dollar, hyper-performance machinery that cranks out 0-60 mph times of less than 3 seconds, and top speeds in excess of 200 mph.

When we apply a $50,000 price limit, those ranks shrink dramatically.

It turns out the field of performance cars doesn't put a whole lot of stock in affordability--even though some of our favorite cars, like Porsche's 718, aren't too far above the median price for a new car sold in 2016.

For the best combination of scalding performance and low price of entry, there's not much reason to look very far past our own backyard. Detroit designed our favorite performance value, and it's built not far from Motown.

It's a car that MotorAuthority named its Best Car To Buy just last year.

Our Best Performance Car to Buy 2017 is the Chevrolet Camaro.

The latest Camaro came along last model year bearing huge performance dividends, but not much difference in outward appearance. Still recognizably a Camaro, the latest car is smaller and has a more pronounced wedge shape, which gives it a high-tail stance that's not as haunchy as the model before. It's bulky and bawdy, all at the same time. Thank goodness the cockpit's a more straightforward victory: it doesn't feel like it came from the dollar-store discard bin any more, and its big touchscreens and round air vents look fresh, and likely will for years to come.

Its predecessor looked the part, but the last Camaro's handling wasn't ripe by the time the car was launched. Not so with the new car. It's fully baked. Of course its straight-line performance is thrilling--that's become a Camaro given. Now, the way it tackles corners is equally noteworthy, thanks to some suspension geometry on loan from the Cadillac ATS-V.

That's all brilliant, and so is the handling. We've decided it's time to stop calling the Camaro a musclecar, because that backhanded compliment doesn't give it any credit for excellent steering, magnetically-damped ride comfort, or its canny transitional behavior. Especially in the Camaro SS and 1LE, the Camaro turns tire patch into a stream of data going to your fingertips through the steering wheel, no matter which driving mode you've selected. It's a true sports car, one that skims through corners instead of stomping and muling its way around them.

MORE: Read our first drive of the Chevrolet Camaro 1LE

The new Camaro's middle name could be Compromise. It gives up size and space in exchange for its finely honed edge.

It's shorter than before, with less space between the wheels. That means the back seat is atrociously small in coupes, even worse in convertibles. So what? At least racers can fit in the front seat with a helmet on, something tall track drivers just couldn't do in the gen-5 Camaro. The rear seats won't hold much more than a backpack. The trunk is shallow and narrow. Your point is?

The Camaro's done reasonably well in crash tests, and has the latest in safety gear. A rearview camera is standard; we say add more, because the outward vision is pathetically bad.

Other favorite features get bundled into easy-to-grok packages: LT, SS, ZL1, any of them allowing drivers to pick and choose interior trim and options to match the car's extreme extroverted nature. Take the manual, take the magnetic dampers, take the active exhaust--and take the name of your best traffic-ticket fixer with you, at all times.