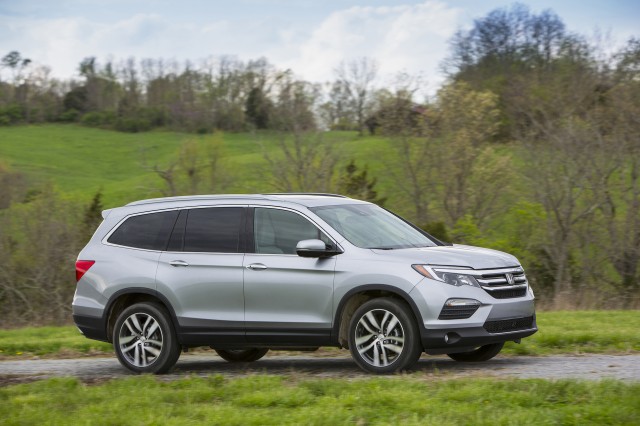 Last year's Best Car to Buy (according to us) has received a noteworthy update for 2017: Apple CarPlay and Android Auto will be standard on most Honda Pilot trim levels.

This technology allows a driver to use certain smartphone functions through the vehicle's infotainment screen—text messaging, certain audio apps like Pandora, and, perhaps most crucially, navigation.

Honda says it is making CarPlay and Android Auto standard on EX and above trim levels, meaning only the entry-level Pilot LX will lack the tech. EX and above Pilots feature an 8.0-inch touchscreen that we mostly like; our two main complaints about it in our long-term 2016 Pilot are the lack of Apple and Android connectivity and the fact that there is no volume knob.

Unfortunately, the volume knob hasn't yet reappeared on the Pilot (although the 2017 Honda CR-V gets one, so there's still hope!), but the infotainment system receives a new screen coating designed to reduce fingerprint markings.

The only other change of note is that Honda is expanding availability of its White Diamond Pearl exterior color and black interior shade to more than just to the range-topping Elite.

Honda says that the Pilot will sticker from $31,475 when the 2017 model goes on sale. That price is for an LX with front-wheel drive. Adding all-wheel drive pumps up that price by $1,800.