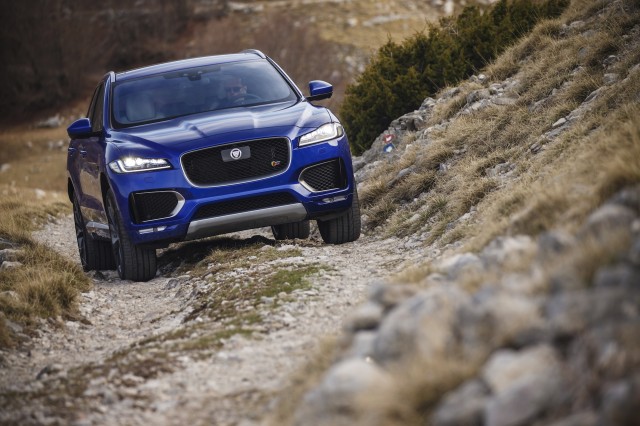 After sitting on the SUV sidelines for decades while its rivals racked up volume and profits selling tall wagons with (sometimes optional) all-wheel drive, Jaguar is finally in the game.

But don't think of its new F-Pace, the first crossover SUV ever to wear the leaping cat logo, as simply another bland crossover designed to ferry around the family while looking sort of like it should be bouncing through the Serengeti. And it's not a rebadged Land Rover, either, even though the proprietors of the "Best 4x4xFar" share a lunchroom with Jaguar.

Instead, the F-Pace is more like a Jaguar XE with a tall wagon body. The two share many of their proportions and styling details, not to mention their powertrains. But while the XE has been designed to slay the BMW 3-Series, the F-Pace shoots for the Porsche Macan. That's no easy task; the Macan is one of the finest driving cars ever built, outpacing most coupes and sedans.

But the F-Pace comes to the table with the right ingredients. A supercharged V-6 with great low-end grunt and lots of resonance inside the cabin powers most F-Paces. It's teamed with a crisp-shifting 8-speed automatic, and can hit 60 mph in 5.1 seconds, according to Jaguar. But mainstream buyers not quite as inclined to tackle the twisties will find its standard 2.0-liter turbodiesel the way to go. Earning a heady 33 mpg on the highway, the engine is a low-guilt way to enjoy luxury crossover motoring.

Where the F-Pace stands out against the Macan is in the way it pampers passengers and cargo. Unlike the Porsche, the Jaguar has room for real adults to ride long distances in the second row, while its cargo area is sufficiently commodious for their luggage. Its interior, like that of the XE, is subdued and a little stark unless you spend extra for fancier hides and trim, but it's functional and comfortable. Skip the standard infotainment system and upgrade to Jaguar's new InControl Touch Pro system with its 10.2-inch screen and easy, lightly-layered menus.

It's a stiff field of competitors this year, but will the roughly $44,000 to start F-Pace be able to tackle other competitors to with The Car Connection's Best Car to Buy 2017 award? We'll find out next week.