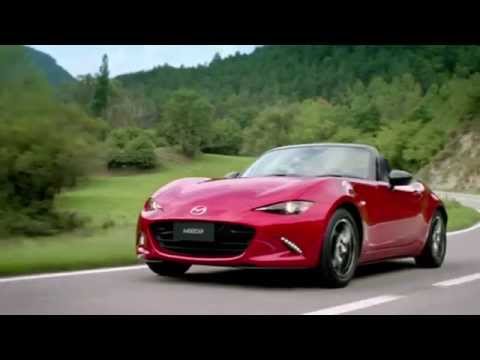 Addition by subtraction can work wonders. Ask anyone who's lost a cell phone for a couple days and they'll say that the world changes the moment they started looking up.

Before we go further, let's address the Italian standing in the middle of the strada. The Fiat 124 Spider is very similar to the MX-5 Miata—they're mechanically related in many ways and built on the same platform—but we see the Fiat as a touring car and the MX-5 as a sportier pick. In scoring, the two are separated by a fraction of a point, and for many buyers, we can see the decision being even closer than that.

The MX-5 Miata's ace is its naturally aspirated 2.0-liter inline-4 that makes 155 horsepower. It's a predictable delivery of power that we prefer over the Fiat's turbo-4, even if it doesn't leap off the line. We'd opt for the short throw 6-speed manual transmission with its light clutch, but we wouldn't fault an owner for opting for the 6-speed automatic—as long as they kept it in "Sport" mode.

Compared to many other cars on the road—and other convertibles—the Miata is a featherweight. At just over 2,300 pounds in base configuration, the Mazda clocks in at hundreds of pounds—if not thousands—lighter than its competitors and like a true lightweight, it's at its best when it sticks and moves. Mazda specifically tuned roll into the MX-5 Miata's body to communicate better with drivers, a welcome feeling compared to other flatter and more serious roadsters.

There are virtually no concessions made for the soft-top roof either. Next year, Mazda will sell a retractable hardtop version of the MX-5 Miata called the Miata RF (Retractable Fastback), but the basic canvas roof works just fine for us. The roof folds neatly behind the seats with just one hand, and goes back up just as quickly. The structural integrity of the Mazda stays solid regardless of where the top is, no flex or shake comes through the cabin.

For a small car focused on the essentials, there must be concessions—and there are just a few in the MX-5. The trunk is big enough for a couple backpacks and not much else, the infotainment system isn't integrated very well into the dash, and go look for the 12-volt plug in the cabin, we'll wait right here.

The cupholders near your elbows and the 12-volt plug placement near the passenger's left ankle take just a few minutes to get used to, but the open-air experience of driving a lightweight, nimble, and appropriately powered convertible puts smiles on our faces that last for days.

Want to add to a drive? Subtract the top.