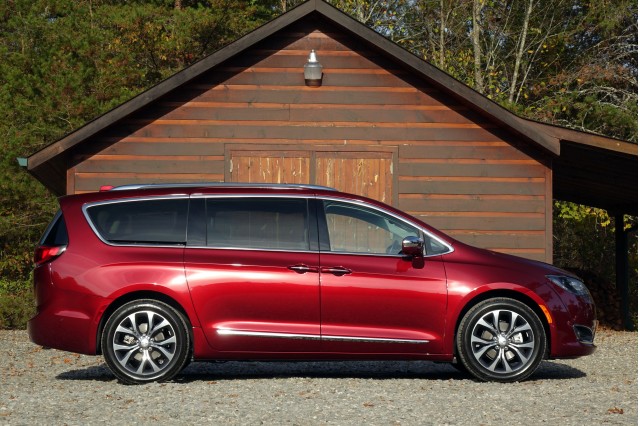 Chrysler builds the best minivan on the road today, and we'll be among the first to call the 2017 Chrysler Pacifica the Best Minivan To Buy 2017.

It's simple. Chrysler already had two excellent vans that lingered in its lineup for too long. The Dodge Grand Caravan and Chrysler Town & Country were big-box bores. Revamped last in 2011, they fell behind in crash-test scores and overall refinement, while the Toyota Sienna and Honda Odyssey soared with new features like in-car vacuums and 8-speed automatics.

Chrysler invented the minivan, but to fend off the Sienna and Odyssey, they've reinvented their minivan. The Pacifica is nothing short of a total rethink: a new architecture, a new transmission, a thorough re-think of how families that want a minivan, use a minivan.

The look is a fresh take on family needs. The Pacifica is still a one-box shape, but there's more than a hint of sex appeal in its sleek lines and especially, in its laid-back roof pillars. The interior's a knockout, at least in upper trims, a combination of smooth shapes, interesting textures and colors, and well-thought-out controls.

Performance isn't a huge deal with minivans, but Chrysler's 287-hp V-6 pairs with a new 9-speed automatic for excellent acceleration and good drivability. Fuel economy is fine with the gas model, but the Pacifica also beats all its rivals to market with a plug-in hybrid model coming late this year, with a 30-mile battery range beyond its daily-driver hybrid mode. Handling is better than fine: the Pacifica has crisp responses, a stiff new body, and a smooth, composed ride.

MORE: Read our first drive of the Chrysler Pacifica

Where the Pacifica excels isn't a usual automotive commodity: thoughtfulness. It simply stuffs more useful features and equipment into its spacious body than any rival, Honda and Toyota included.

It starts with the fold-away second- and third-row seats. Rivals scoff at the seats, but Chrysler's clever packaging upconverts the family van to a utility vehicle when it needs to be. Plywood, mulch, furniture--there's almost nothing we can't think of fitting into its cargo bay, with its back seats folded down. A full-size sofa will fit--without removing its middle seats entirely.

Beyond that functional superiority are the exquisite details. The optional DVD entertainment system has an app that allows kids to follow the driving route, ending the "Are we there yet?" game once and for all. The tubs that can house the fold-away seats can be used for any kind of storage when the seats are raised. Panoramic glass panels flood the cabin with light, making long road trips less queasy. Surround-view cameras make a tight docking maneuver in a parking deck so, so much easier. An in-car vacuum comes with a hose long enough to vacuum the car sitting in the next garage bay.

Add in the Pacifica's excellent crash-tests scores from both agencies and safety options such as forward-collision warnings and adaptive cruise control, and the Pacifica becomes a neat summary of the state of the art for family vehicles. It's built with just that purpose in mind--so for those who don't need the pretensions of the SUV to get the job done, the Pacifica abides.