Whether we choose Clinton or Trump, cheap gas will stick around (for a while, anyway) 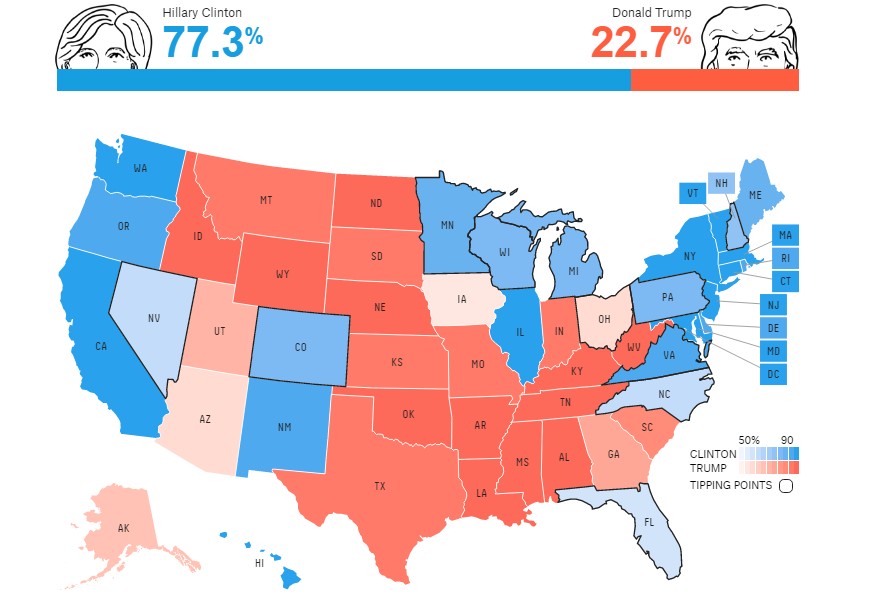 U.S. electoral vote predictions as of October 31, 2016 (via fivethirtyeight.com)

Tired of hearing about the U.S. presidential election? We bear tidings of great joy:

1. It'll all be over next Tuesday (hopefully).

2. Today is Halloween, which means candy, trick-or-treaters, and other spooky distractions from 24 hours' worth of contentious headlines.

3. According to many analysts, the price of gas will remain low, no matter who takes up residence in the Oval Office.

Those three items should spell relief to many Americans who've been anxious about the outcome of this election. Fans of hybrid and electric vehicles--which have seen sales slump due to cheap fuel prices--may not be quite so happy, but if you're in that number, buck up, because the long-term trend could favor you.

Cheap gas, but for how long?

Economists generally agree that elections have little effect on fuel prices. Those prices are driven by market factors like supply and demand, not by energy and economic policies. (Thought there's a caveat: keep reading.)

That's good news for gas users, because there's an abundant supply of oil today thanks to high levels of production in the U.S. and abroad. In fact, there's so much oil that the market is a bit insulated from shocks like political crises.

In terms of pump prices, motorists probably won't see much of a change in the near future. The U.S. Energy Information Agency predicts that the average price for a gallon of gas will rise only slightly in the coming year, creeping from $2.12 today to $2.26 in 2017.

Policies do have psychological effects, though

Over the long term, however, politicians may have an impact on fuel prices by shaping public opinion. That could affect the kinds of cars we drive and how much fuel we consume.

One analyst at the nonpartisan Securing America's Future Energy group believes that Republicans--who tend to be more friendly to the energy industry-- can help keep fuel prices low. However, Democrats--particularly Hilary Clinton, who's promised to nudge America further toward energy independence and reliance on renewable energy sources--could actually push prices lower by reducing the country's demand for fuel.

Whether those theories bear out in the real world, we'll have to wait and see.

P.S. For those wondering where things stand now, we've put Nate Silver's current electoral vote predictions above--but of course, who knows how many more damaging scandals will be unearthed in the coming days? It's almost over, folks.