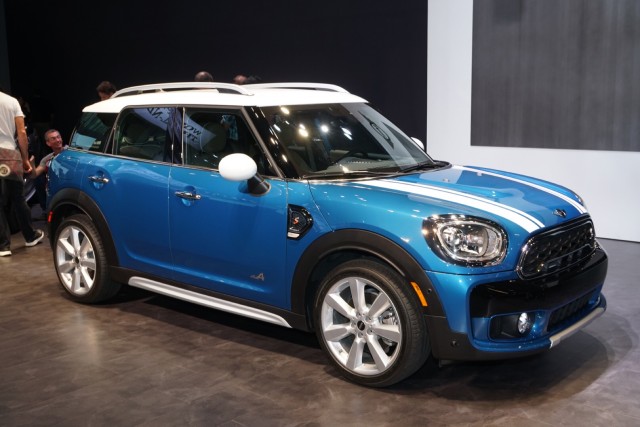 Is it fair to say that Mini is all grown up now? Ahead of its formal debut at the 2016 Los Angeles Auto Show, Mini has taken the wraps off of its all-new 2017 Mini Cooper Countryman, which isn't mini at all.

In fact, Mini boasts that the 2017 Countryman is its largest model ever. Stretching 169.8 inches from head to toe and 71.7 inches wide, the new Countryman is eight inches longer than its predecessor. Moreover, it offers the brand's first plug-in hybrid powertrain

The lineup will hit dealers in March of 2017, launching first with a 1.5-liter turbocharged 3-cylinder and a 2.0-liter turbocharged 4-cylinder. The smaller engine is rated at 134 horsepower and 162 pound-feet of torque, and it's available with either a 6-speed manual or a 6-speed automatic. The 2.0-liter powers the Cooper Countryman S, and it's rated at 189 hp and 207 lb-ft of torque. The S model offers a choice between 6-speed manual and 8-speed automatic gearboxes. 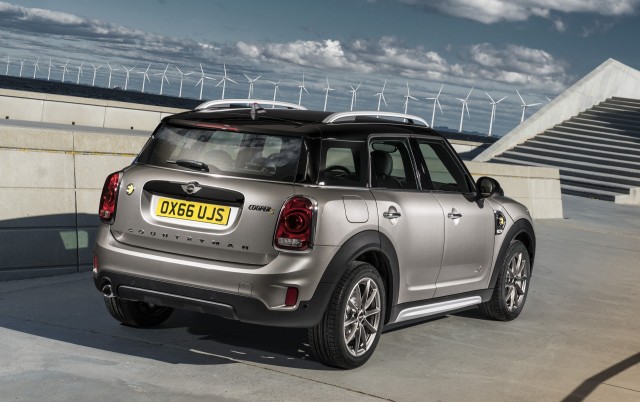 Base and S models come standard with front-wheel drive, while the Countryman S will be offered with Mini's ALL4 all-wheel drive system.

In June, the Cooper S E ALL4 will follow, mating an electric motor to the base Countryman's 3-cylinder engine and 6-speed automatic gearbox. The electric powertrain adds 87 horsepower and 122 lb-ft of torque, making the hybrid both the thriftiest on fuel and the fastest Mini Countryman; Mini says it'll zip to 60 mph in just 6.8 seconds. Moreover, the Cooper S E ALL4 7.6 kwh lithium-ion battery pack enables what Mini estimates will be a 24-mile electric-only range.

Those engines power the biggest interpretation of the Mini yet. Stretching about three and a half feet longer than the original Mini Countryman of the 1960s, the latest Countryman is a decidedly different beast.

Its underpinnings are the same all-new platform that's also found under the latest Mini Hardtop, Clubman, and Convertible, as well as the BMW X1. 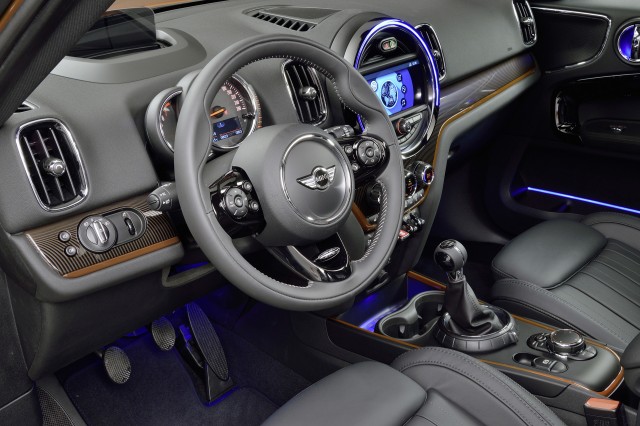 Inside, the Countryman's interior is closely related to the design theme found in the brand since its reinvention more than a decade ago. The Cooper S E ALL4 features a power display rather than a tachometer, and its push-button starter is a different color, but it is otherwise shared with the gas-only models.

Rear seat room promises to be the best you'll find in a Mini, although the hybrid model's lithium-ion battery pack is located under the second row and it's not clear if it has a detrimental affect on cargo space.

Mini hasn't yet announced full specifications or pricing for the Countryman, but it says that even the base model will have a wide range of standard features like leatherette upholstery, a panoramic moonroof, a proximity key, an infotainment system with a 6.5-inch screen, a backup camera, Bluetooth connectivity, automatic headlamps and wipers, and either 17- or 18-inch (S only) alloy wheels.