The states that do (and don't) like to use seatbelts 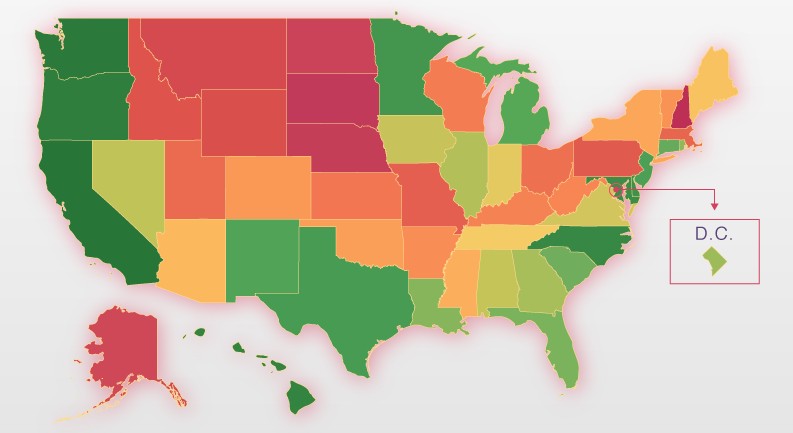 In 49 states and the District of Columbia, it's illegal to ride in the front seat of a car without wearing a seatbelt. In 28 of those states, back seat passengers have to buckle up, too.

New Hampshire is the lone holdout, with no seatbelt law at all.

But of course, just because there's a law on the books, that doesn't mean that you have to like it. Are you a fan of enforcement? Or are you in a New Hampshire state of mind? According to a new survey, the answer to that question can vary, depending on where you live.

For that survey, 2,000 Americans were asked about their seatbelt habits--specifically, whether they use them and if so, how often? Respondents were also polled about their feelings on seatbelt laws for adults and kids. The data was combined with stats on seatbelt usage from the Centers for Disease Control and Prevention to present an even more accurate, state-by-state picture of safety habits and beliefs.

Here are some of the biggest takeaways:

Drivers in the West are most likely to use seatbelts, though as you can see from the states shaded green in the map above, swaths of the South fare pretty well, too. Rates are highest in California, Washington, Oregon, Hawaii, North Carolina, Maryland, Delaware, Minnesota, Texas, and New Jersey.

Nearly 75 percent of Americans believe in seatbelt laws: While 25.19 percent of respondents say that  wearing a seatbelt is a personal choice, the remaining 74. 81 percent believe that wearing them should be required by law. Interestingly, men are more likely than women to dislike such laws, with 28.19 percent of males saying they should be revoked. Among women, 21.85 percent feel the same.

Drivers in the Midwest and West feel very differently about seatbelt laws. Given the stats above, it shouldn't come as a shock that 30.27 percent of Midwesterners believe that wearing seatbelts is a personal choice. Meanwhile, just 20.57 percent of those in the Western region say the same.

Generally, people believe that kids need to wear seatbelts--except on school buses. Most respondents understand that children need to wear seatbelts. However, when asked about the most important times for drivers and passengers to buckle up, riding a school bus ranks at the bottom of the pile. (Riding as a front-seat passenger in a car is the top choice.)

If you have strong feelings about seatbelts and seatbelt laws, share them in the comments below.