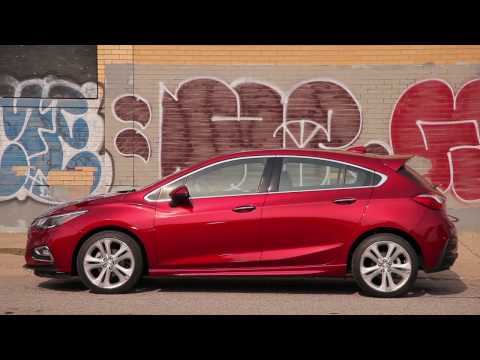 Economy of scale has given Americans car buyers an overflowing buffet. Case in point: More hatchbacks are in the U.S. now than our current appetites call for. Honda's latest Civic will come with an odd door, the first time in more than a decade. The Corolla iM hatchback is barely out of its diapers—first as a Scion last year and now as a Toyota. The Ford Focus, Mazda 3, Subaru Impreza, and others are now staples of our diet. The new Chevy Cruze Hatch is now our latest dish.

The 2017 Chevrolet Cruze Hatch marks the first time the automaker has offered the Cruze as a five-door model in the U.S.—previously it was only available as a four-door sedan in the States—despite being one of the best-selling cars around the world for the General.

And we're getting the Cruze Hatch partially because General Motors has enough in the kitty to bring that model to the table; partially because we're foolish enough to believe the hatchback may have a future in the U.S. Yup, that old line again.

In 2015, fewer than one in 20 cars sold in America were hatchbacks, according to IHS Automotive. That number is only expected to grow slightly by 2020 to just over one in 20, but we count the number of available hatchbacks on the market to be just over 40. (By our numbers at The Car Connection, that means roughly one in eight new cars made by automakers is available in a hatchback form.)

But by GM's estimation—and others, including Honda and Nissan—the market for hatches will grow, and could explode if an unexpected gas crunch comes around again soon.

In a police lineup, we'd have a hard time distinguishing the Cruze Hatch from the Cruze sedan staring both in the face. The styling changes are reserved for behind the rear doors and tail; nose to nose, the cars are nearly identical. The Hatch loses more than 8 inches in overall length to the sedan, but keeps most of the same dimensions. The length between the wheels is the same, and the hatchback's track is nearly the same, too.

Where the two diverge is the dramatic drop behind the rear passengers. The sedan's roofline line plunges toward the decklid, while the hatchback's roof better blends into the stubbed tail. The chrome around the rear windows of the sedan and hatch tell the story: the Cruze Hatch falls away just the same, but is squared off to make way for a taller cargo hold.

How much more space you get behind by opting for the hatchback is a matter of relativity.

Compared to the sedan's fairly voluminous 13.7 cubic feet of trunk, the Cruze Hatch's 22.7 cubic feet behind the second row is clearly spacious. However, if you compare the Cruze Hatch's cargo area alone to other hatchbacks it begins to shrink. Cargo room behind the second row of a Ford Focus is slightly bigger (23.8 cubes) as is the case for the new Civic hatchback (25.7 cubes in non-Sport configuration), but those gaps disappear if you fold down the rear seats in all three. In fact, the Cruze even nudges ahead. It maxes out at 47.2 cubic feet of space, compared to 43.9 for the Focus and 46.2 for the Civic. Still, compared to the small subcompact Chevy Sonic hatchback, the new Cruze Hatch loses half a cube to that car, mostly on vertical space.

Tales of the tape tell us that the Cruze Hatch's similarities with the sedan limit how tall it can be. The Hatch has to make good with the shape the sedan has already drawn.

Taking what the sedan has to offer isn't such a bad thing, though. Since it was all-new last year, we've found the second-generation Chevy Cruze to be a more nimble performer. The sedan lost about 250 pounds from its first generation, and while the Cruze Hatch may have gained some of it back—figure somewhere in the neighborhood of about 100 pounds of sheet metal—it still feels just as agile behind the wheel.

Under the hood is the same 1.4-liter turbocharged inline-4 found in the sedan. The hatchback doesn't have any tricks either, it's rated at the same 153 horsepower and 177 pound-feet of torque. While those hum the same tune from the sedan, the direct-injection engine doesn't thrum away like we'd expect given the fact that the cargo area is part of the interior.

The engine quietly works its way about town with a flat torque curve that starts lower to help the Cruze tingle more than its modest numbers would indicate. It'll shuffle up to 60 mph without much of a fuss, but it's best in city runarounds at lower speeds, taking friends out to eat rather than launching their lunches around a racetrack.

We suspect that most of our frustrations with the Cruze hatchback's sometimes-flatfooted behavior comes from its 6-speed automatic, which can be swapped out with a 6-speed manual. In the sedans that we've driven, and now the hatch, stamping on the throttle from a slow forward roll induces a second or so of indecision in the Cruze's powertrain. We'd stop short of calling the 6-speed manual a cure-all—we haven't driven it in the hatchback version.

The panacea for both may be an upcoming diesel powertrain, which will likely be a 1.6-liter turbodiesel that could add nearly 80 lb-ft more of twist and a new 9-speed automatic, developed jointly by GM and Ford. The oil burners are due next year and will certainly improve on the Cruze Hatch's 38 mpg EPA highway rating with the automatic—maybe even into the mid-40s.

For now, gasoline-powered Cruze models will keep the 6-speed automatic that parses through gears to keep the hatch most efficient—and to maximize on its early torque-curve plateau. There's just no reward for wringing out the engine.

The Cruze Hatch doesn't improve on rear seat head room, but the mid-size dimensions (with a compact footprint) swaddle rear passengers over some competitors anyway. Up front, driver and passenger won't have many complaints with the decent buckets and plentiful head room.

On the road, our Cruze Premier RS tester was shod with 18-inch wheels and a unique rear suspension setup that may have exacerbated the already lousy condition of Detroit's roadways. Thankfully, shuttling up the river and back into town, the Cruze Hatch blended in with traffic without much drama over several hours behind the wheel.

We also noticed in our daylong drive that the Cruze Hatch's svelte shape cuts a tidy hole through the wind, and we didn't notice much of the gust coming through the chunky doors.

For now, Chevy is only making the Hatch available in top-level trims, LT and Premier, with an RS body kit available on both. That means the Cruze Hatch isn't competing with other brute-force logicians like the Impreza or Sonic hatchback. And starting at just over $23,000, and approaching $30,000 like our $29,860 tester did, it can be pricier than both.

We'd nitpick the order sheet: Our 8.0-inch touchscreen with Android Auto and Apple CarPlay came bundled with a sunroof that cut into head room; automatic climate control was packed with a wireless phone charger that we couldn't use with our iPhones. Those are minor complaints.

Options quibbles aside, the Cruze makes good on its attempt to appeal to buyers unswayed by the movement toward taller-riding, but not necessarily more functional, small crossovers.

The Cruze Hatch is here for our relatively small appetites for hatches, but the diesel version—with more torque, a newer automatic, and better fuel economy—has us salivating more.