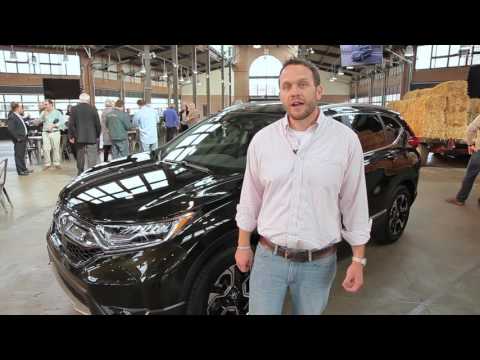 Promising as big a leap forward as the last Civic redesign was over its predecessor, the 2017 Honda CR-V that goes on sale soon appears to be a vast upgrade over its rather dowdy—but hugely popular—predecessor.

Honda calls its new CR-V bolder, but its profile isn't a big change from before. Instead, it's what's underneath that will make the biggest difference.

Outside, however, the CR-V's distinctive rearmost roof pillar design carries over, but its front end gains a front bumper that appears to jut out a little more than before, as well as more complex detailing around its headlamps.

The CR-V will again be available in in LX, EX, EX-L, and Touring trim levels, but that's about all that's staying the same for 2017.

Only the base LX model won't have a turbocharger, the rest of the lineup will be boosted. In this case, the 1.5-liter, direct-injected inline-4 that debuted in the Civic last year makes its first crossover appearance. With 190 horsepower and 179 pound-feet of torque, it appears on paper to be a mixed bag over its 185 hp, 181 lb-ft predecessor. But there's more than meets the eye here, since the turbocharger delivers its full torque spread from just 2,000 all the way to 5,000 rpm.

CR-V LXs, meanwhile will use a 2.4-liter inline-4 that's largely carried over and delivers 184 hp and 180 lb-ft of torque. Both engines will be mated exclusively to a CVT, with the option of either front- or all-wheel drive on all trim levels.

Underneath, the CR-V remains fairly conventional with a MacPherson front suspension setup, a multi-link design at the rear, and four-wheel disc brakes. Alloy wheels are standard on all—17s for the LX and 18s for the rest of the lineup.

The automaker said that the new CR-V will have more high-strength steel than before, and will handle better than its predecessor.

Honda hasn't yet announced fuel economy for the 2017 CR-V. All models will include an active shutter system hidden behind the front grille designed to improve the model's aerodynamics.

DON'T MISS: 5 unethical tricks car dealerships will play on you

Honda, always a master of interior packaging, says that the CR-V will boast the roomiest cabin in its class as well as more rear-seat leg room than any rival. Rear seat leg room is up by more than 2 inches, and cargo space has been similarly lengthened, up 9 inches in the back.

Despite that extra room inside, the CR-V remains among the smaller crossovers in its segment, stretching 180.6 inches from nose to tail (1.2 inches longer than before, 1.6 inches between the wheels). But some of that interior room clearly comes from a width that increases from 71.6 to 73 inches.

Filling that interior are features like an Android-powered 7.0-inch touchscreen with Apple CarPlay and Android Auto capability on some models. The center console has been refined too, with a vertical row of touchscreen buttons borrowed from the Civic. Honda promises a new navigation system, a welcome upgrade. Interestingly, the touchscreen infotainment system includes a volume knob—something the automaker has been leaving out of its cars lately, and a common complaint from customers, according to Honda.

Even the CR-V LX will be well-equipped, with the expected power windows and locks, as well as remote entry, single-zone automatic climate control, Bluetooth, and a 5.0-inch LCD screen audio system with four speakers.

But it's the EX that represents high value these days, with the aforementioned turbocharged engine, a 7.0-inch infotainment system, heated front seats, a power driver's seat, a power moonroof, a proximity key, dual-zone climate control, tinted windows, and fog lights.

The EX-L adds to that specification leather upholstery, memory for the driver's seat, a power passenger seat, and an upgraded eight-speaker audio system. Navigation is optional on the EX-L.

Touring models top the line and are the only ones with a power liftgate, heated rear seats, LED headlamps, and a nine-speaker audio system, and they come standard with the navigation that's optional on the EX-L.

On the safety front, the automaker's Honda Sensing suite of tech returns and, in a surprising move, will come standard on EX and above trim levels—which Honda says should account for about 75 percent of all 2017 CR-Vs sold next year.

Honda hasn't yet announced pricing for the 2017 CR-V.