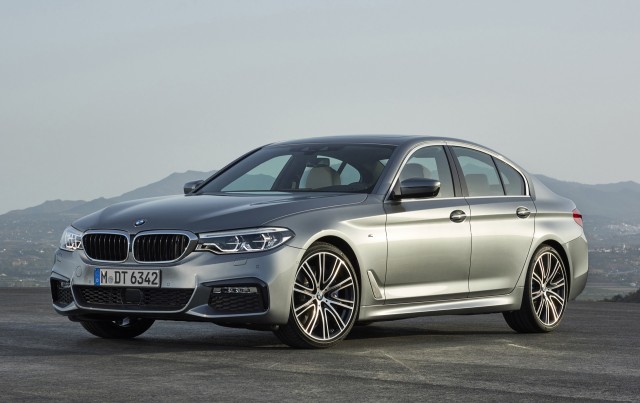 Clearly channeling its larger 7-Series sibling, the 2017 BMW 5-Series has arrived—and it marks BMW's biggest foray into autonomous driving yet.

The 2017 5-Series won't hit dealers until early next year, and the automaker is holding off releasing pricing and detailed specifications until then, but there's a lot we can tell you now.

For one, the 5-Series is lighter than before, despite being slightly longer (about 1.2 inches), wider (by about 0.3 inches), and taller (0.6 inches). Most of that extra girth comes via longer overhangs since the car's wheelbase is only up by 0.2 inches.

ALSO SEE: How will you get around in the future? Here are 3 possible scenarios 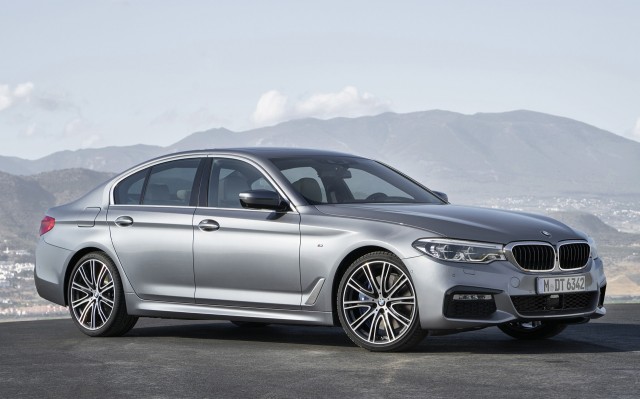 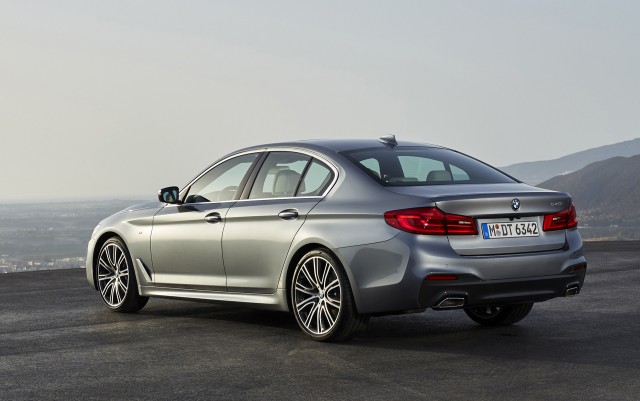 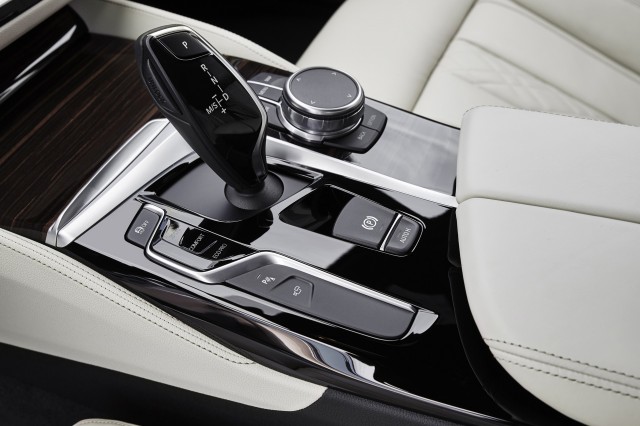 It's also a little more dynamic-looking, although certainly still conservative. LED headlamps are standard, and they flow into a wide version of BMW's kidney grille. A deep strake down car's side profile, just above its rockers, is a clear tie-in with the 7-Series, but the new 5's tail lamps are more of an evolution over the current model than a copy of the big brother.

BMW says that its Sport design trim will now be standard, with the M Sport Package returning as an option. On this latest model, Sport means 18-inch alloy wheels, high-gloss black and chrome trim, a black headliner, and sports seats with power adjustable side bolsters. M Sport, meanwhile, adds its own appearance package outside with new front and rear bumpers and rocker moldings, as well as 19-inch alloy wheels and a lowered suspension tuned by the automaker's M Division. Since all cars will have sports seats, the M Sport only adds its own steering wheel and aluminum pedal covers.

Massaging seats will be among the 5's options.

Inside, there's still a lot of mystery, as the automaker hasn't released images of the 5's new dashboard. But its center console features the company's latest control knob, which it says operates a 10.25-inch infotainment screen. BMW says it has substantially upgraded the car's gesture controls and voice commands, as well. A choice of audio systems will be optional: a 16-speaker Bowers & Wilkins system delivering 1,400 watts of power or a Harman Kardon unit with 600 watts.

BMW's new 2.0-liter turbocharged 4-cylinder will be standard on the renamed 530i (a model that, historians will note, once utilized a small-displacement V-8). Delivering 248 horsepower and 258 pound-feet of torque, it will allow for a sub-6 second 0-60 mph sprint with the optional all-wheel drive system.

An 8-speed automatic transmission is set to be the only on offer. This will be the first generation of BMW 5-Series without a stick shift. 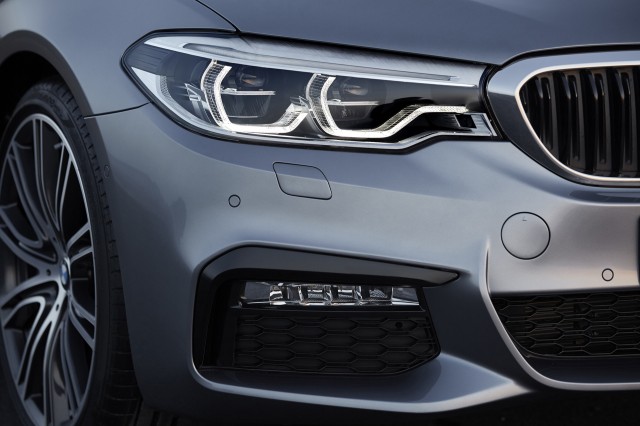 Underneath, a new double-wishbone front suspension is paired to a new five-link rear setup, and BMW says it will offer its variable ratio power steering system on both rear- and all-wheel drive variants.

Order the Adaptive Drive package and you'll net a new electromechanical anti-roll system that holds down the sway bars as needed with electric swivel motors rather than the hydraulic setup offered before.

All 5-Series sedans will include adaptive cruise control that uses radar to bring the vehicle to a complete halt and start it up again in heavy traffic, assuming the car has been sitting for under 30 seconds. Interestingly, BMW is including a heating element on the new 5's radar sensor up front for wintry conditions.

The adaptive cruise control system can now help the driver steer more quickly out of the way if aggressive braking is necessary to evade an accident.

A more advanced lane departure warning system operates between 40 and 130 mph to steer the vehicle back into its lane if it begins to drift. The system can even alert the driver and then steer itself out the way if another vehicle begins to drift toward them.

DON'T MISS: 5 unethical tricks car dealerships will play on you 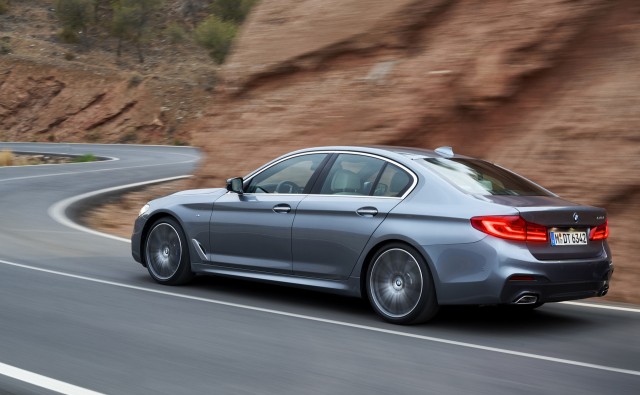 Of course, no autonomous-esque car is complete without a full complement of steering features, and to that end the 5-Series features better image recognition and a bunch of software updates designed to help it stay in between lanes more comfortably.

And like that old James Bond movie, the driver can pull up near a parking spot, get out, and let the car park itself while staying in command from the car's key. 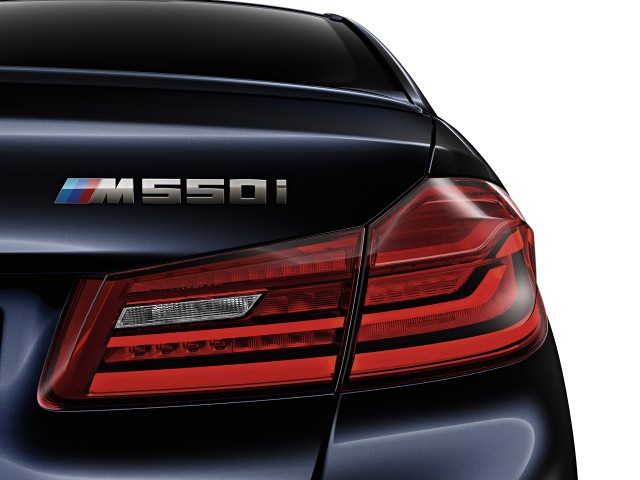 Soon, BMW will debut a flagship M550i and a plug-in hyperformance 530e iPerformance. While we have photos of the badging on both, we don't have any real details yet.

The final hit, which is probably about a year away, will be the next-generation BMW M5 high-performance model, which could boast up to 600 hp from a twin-turbocharged 4.4-liter V-8 related to the engine used in the current M5.