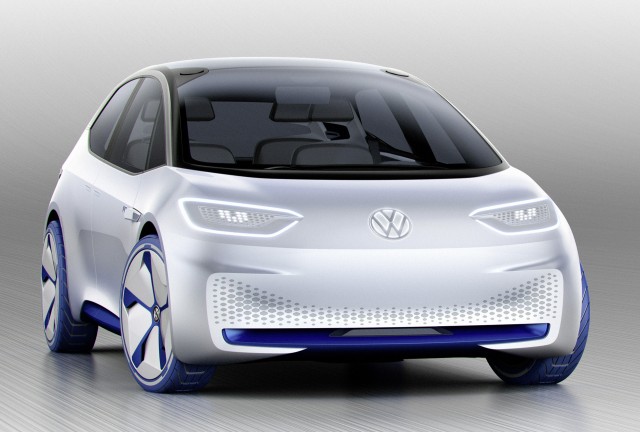 Really, pay no attention to the outside of this concept car. It's what's under the skin of what VW is calling the "I.D." concept that makes all the news here.

Volkswagen will unveil the all-electric concept this week at the 2016 Paris Motor Show and detail its new electric structure for small cars, dubbed Modular Electric Drive kit, or MEB. We heard earlier that cars on the MEB platform could eventually have a range of more than 300 miles, which was announced when BUDD-e was unveiled this year.

ALSO SEE: The new 2017 Jeep Compass manages to actually look like a Jeep

We don't know much about what's inside this concept, but we do know that its bones will eventually serve as the underpinnings for millions of cars as the automaker claws back into the worlds good graces again with electric architecture.

Dig underneath the skin a bit and we're likely peeking at the next-generation Golf, A3, and yes, even Beetle. According to Volkswagen, this car—or something like it—will start "in parallel" with the new Golf in 2020 and the automaker plans on selling 1 million electric cars by 2025.

The company said the car's motor would have an output of 125 kilowatts (168 horsepower), and could be fully self-driving by 2025.

Interestingly, Volkswagen said Tuesday that it was a "completely new vehicle concept," but didn't elaborate. We'll have to wait until later this week to find out more of the details, but we're listening, VW.