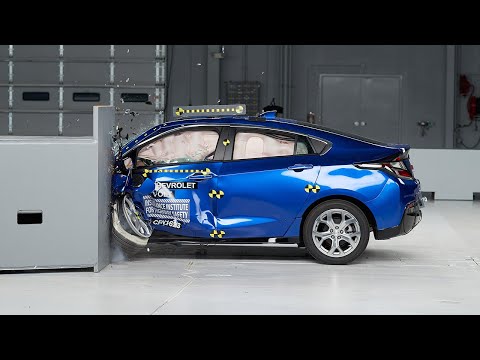 Over the past few years, the Insurance Institute for Highway Safety has made its ratings process more challenging for automakers. However, the 2017 Chevrolet Volt has passed its IIHS tests with flying colors, nabbing the highly coveted rank of "Top Safety Pick+".

To earn that, the 2017 Volt had to perform well on the organization's traditional side, moderate overlap front, roof strength, and head restraint tests, as well as new tests for small overlap front and front crash prevention. It also had to have headlights rated as good or acceptable.

As for headlights, the Volt's standard lights earned an "acceptable" rating from the IIHS. With the optional high beam assist--which detects the presence of other vehicles and switches from high to low beams automatically--the Volt's headlight rating rose to "good".

The Volt is a plug-in hybrid vehicle that can travel 53 miles on a single charge before its gasoline system kicks in. It's the first in a series of electric and plug-in hybrids that were recently tested by the IIHS. Others scores will be published soon.