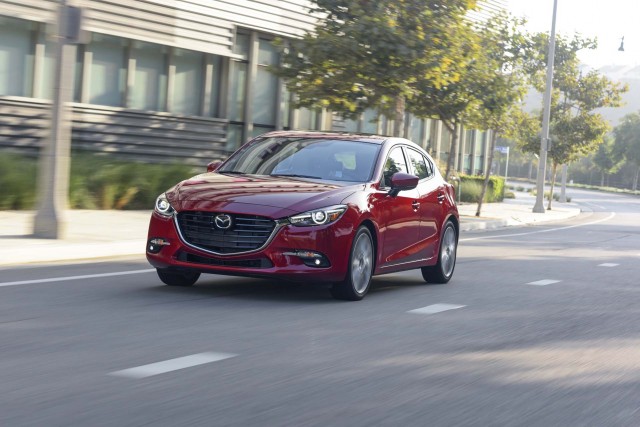 Mazda took the wrappers off its updated Mazda 3 on Tuesday night, and would you just look at that hatchback—it's even angrier that you don't immediately recognize its overall brilliance.

Along with a new front bumper and fog lights, the Mazda 3 now includes semi-sophisticated driving software that should—in principle—make the small hatch or sedan more fun to drive. If you're among the many who can't tell the difference between the new Mazda 3 and the old car, you're not alone; we studied the frames above harder than a mugshot lineup to spot differences between the two.

The revised front headlights now integrate better into a chrome surround that dips beneath the wide grille, and strakes in the fog lights point toward the 3's wide, low chin. More horizontal design elements up front make the 3 look wider, Mazda officials say, even though the car's footprint hasn't changed.

You'd be hard pressed to spot many differences along the side or in back, Mazda freely admits that the sedan's bumper hasn't changed. Even the engine options have stayed the same since it was introduced in 2013.

The biggest difference—relatively speaking—is in how the Mazda 3 handles on the road. Engineers say they've developed new software that applies engine braking when the wheels are turned to shift weight forward onto the front wheels to increase grip on the front tires to maximize turn-in, then releases the torque load to shift weight to the rear wheels once the turn is held to increase grip on the way out. Mazda calls the technology G-Vectoring Control (racers will immediately recognize this as "trail braking," but no good idea goes unbranded these days) but said the overall effect would be less than .01 g on the car.

Inside, the Mazda 3 drops the unromantic manual handbrake in favor of an electronic switch and a storage cubby, a new steering wheel borrowed from the CX-9, and a new tachometer mounted in the middle of the instrument display. The monochromatic LCD displays flanking the tach that show mileage and fuel are still straight up Atari, unfortunately.

The Mazda 3 will get a new transmission option and trim lineup, although officials are still mum on that change. Stay tuned.