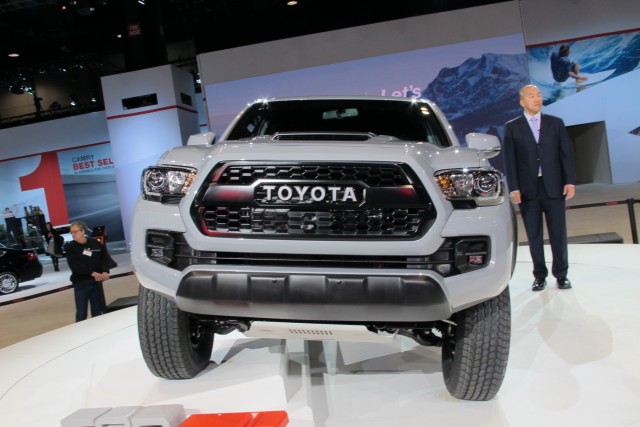 If you've got a mountain to climb—and, it turns out, a mountain of cash sitting around—there are few choices more compelling than the 2017 Toyota Tacoma TRD Pro.

The Japanese automaker has announced that its Texas-built midsize pickup will sticker from $41,700, including a mandatory destination charge. That price nets buyers a 6-speed manual transmission, a widened track, skid plates, Kevlar-reinforced Goodyear all-terrain tires, Fox air shocks, a TRD-engineered cat-back exhaust system, and a host of cosmetic goodies designed to toughen up the Tacoma's looks and capability.

That's a lot of coin over the $34,010 Toyota charges for the Tacoma TRD Off Road, which lacks the Pro's fancy air shocks but still includes a locking rear differential and Toyota's trick traction control system but is otherwise still pretty darn stout.

A 6-speed automatic adds $2,000 to the Tacoma for those who don't want to row things themselves while off road.

As our sister site Motor Authority points out, that's not all that far off of the price of the larger, substantially more powerful Ford F-150 Raptor, which starts a hair under $50,000.

Look for the Tacoma TRD Pro to hit dealers within the next month. If you're more interested in a covered cargo area, Toyota offers much of the Tacoma TRD Off Road and TRD Pro models' goodness in special packages available on its 4Runner SUV line.