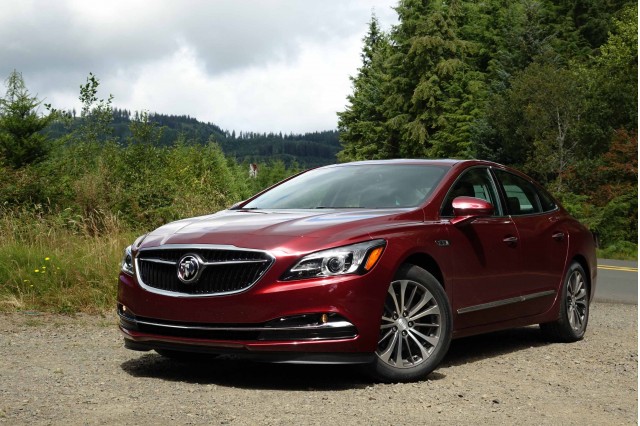 Circling the trendy Pearl district in Portland, Oregon, in a Buick LaCrosse is about as cool as saddling up for an afternoon of work at one of the area's many coffee shops with a chunky HP laptop and not a slick new MacBook. It gets the job done, but it feels rather out of place—and not in an ironic sort of way.

That's not going to change overnight, but the third-generation LaCrosse represents a big enough leap forward for the brand that maybe soon we'll see one mixed in with Portland's regular flow of old Volvos and bicycles with fenders. This latest flagship from the brand your grandfather drove sheds much of its predecessor's frumpiness—not to mention its curb weight—to become what may be the most polished sedan under $40,000. 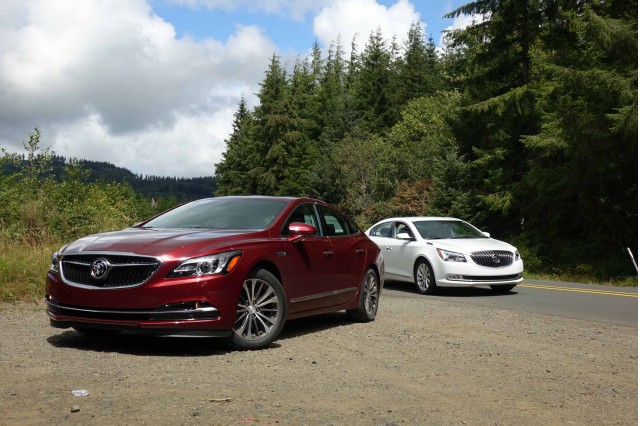 Oh, and it's way under $40,000, listing from $32,990 for the base LaCrosse. Even though it stickers for about a grand more than last year's model, the new-for-2017 LaCrosse is worth every extra penny. Underneath its more svelte, but still voluptuous body sits an updated platform shared in part with the latest Chevrolet Malibu. That new architecture sheds about 300 pounds of weight (for a curb weight of about 3,600 pounds) over the last LaCrosse, which in turn assists in boosting fuel economy by 3 mpg on the highway to what Buick estimates will be 21 mpg city, 31 mpg highway, and 25 mpg combined (figures that drop about 2 mpg with optional all wheel-drive)

Stopping at fewer gas stations isn't the biggest benefit to the LaCrosse's diet. It's how remarkably lithe this still large four-door feels over the road. Its steering is light but precise enough to allow this sedan to be hustled along with more authority than your average full-size sedan. Winding through a quiet, freshly paved forest road on the way to Astoria, Oregon, we quickly grew confident in the LaCrosse's stable handling—this is a full-size Buick that is almost fun to drive. That may not be a major selling point for buyers in this segment, but this newfound poise pays off in routine driving.

CHECK OUT: Are test drives a thing of the past? 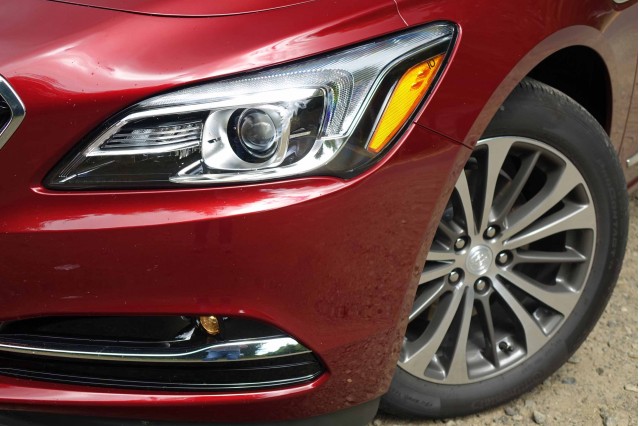 Base models ride on 18-inch wheels, but 20s bundled with GM’s HiPer strut front suspension and adjustable dampers are optional. Frankly, we preferred the slightly more plush ride of the 18s, which better suit the sedan's mission of silent, comfortable motoring. The 20s offer sport and touring suspension modes, but the difference between the two is negligible. Parent company GM's much-ballyhooed HiPer strut front suspension is designed to negate torque steer, but this balanced chassis delivered little of that undesirable wheel tugging even in base trim.

Under its hood, the new LaCrosse features GM's new 3.6-liter V-6 engine that we've already seen in the Cadillac CT6, but Buick hinted to us that there may be more on the way. Gone is the slow-selling, but thrifty 2.4-liter 4-cylinder mild hybrid powertrain that had been rated at 36 mpg. With gas hovering around $2 a gallon, Buick decided to focus only on the V-6. However, a LaCrosse hybrid that utilizes the Chevy Malibu Hybrid's powertrain is sold in China—by far Buick's largest market—and it would make sense over here should gas prices rise again. 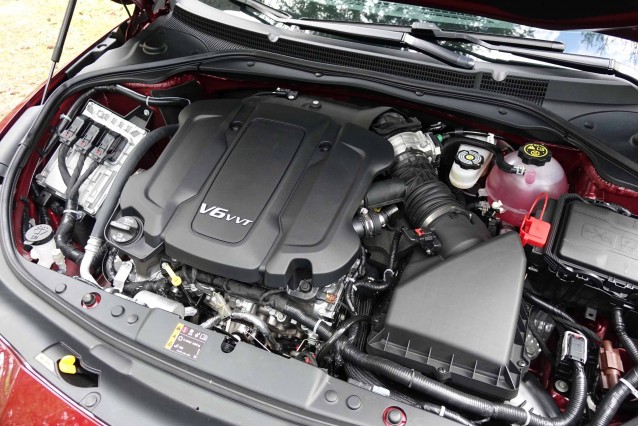 The new, direct injected V-6 is rated at 310 horsepower and 282 pound-feet of torque, modest increased of 6 hp and 18 lb-ft over its predecessor. Yet GM says this an all-new motor, its first engine ever to be designed from the get-go with a start/stop system that proved exceptionally unobtrusive while we sat in downtown Portland traffic. The V-6 also utilizes a cylinder displacement system that shuts down two cylinders in low load situations to save fuel. An 8-speed automatic with a clunky gear lever is the only transmission on offer, but buyers can pick between front and, on the range-topping LaCrosse Premium, all wheel-drive. Properly refined and capable of delivering ample thrust from any speed, the V-6 endows the LaCrosse with a luxurious powertrain feel not seen in the Malibu with which it shares its underpinnings. What you're buying here over the turbocharged 4-cylinder Malibu is an upmarket feel and a little more thrust.

It's the same story inside, where the Buick straddles the line between mainstream and genuine luxury by delivering a well-executed interior with some imaginative design touches. Stitched vinyl covers the doors, the dash, and the center console, while even the faux wood is reasonably convincing. Buick offers several distinct interior flavors and our favorite— although not pictured—is a butterscotch shade called Brandy (named not for "Moesha" but for the beverage). Opt for the range-topping Premium trim level and Buick throws in massaging seats, although even the standard thrones (leatherette on lower trims, leather on higher trims) proved comfortable over a half day drive through Oregon.

There are, however, some ergonomic quirks. Tall drivers will find head room lacking with the sunroof, even though Buick has carved out some extra cranium space from the headliner, and front seat passengers of all shapes and sizes will notice that the center armrest is slightly higher than the elbow pads integrated into the door panels. Additionally, the back seat doesn't afford as much leg room as the sedan's nearly 200 inch overall length might suggest. 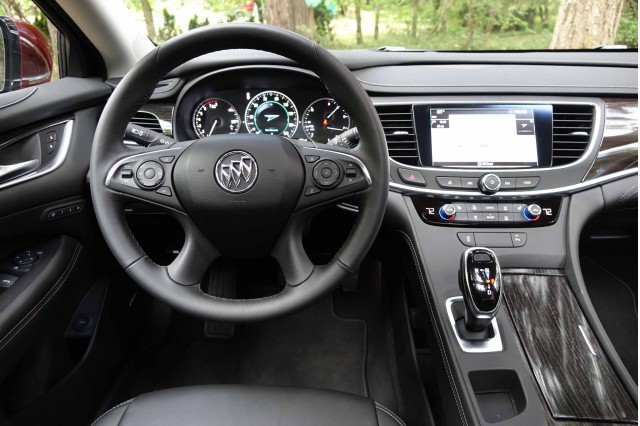 Buick says it doesn't want a single LaCrosse to look downmarket inside or out, and to that end the brand includes a big 8-inch touchscreen infotainment system on even the base model at $32,990. Housing parent company General Motors' Intellilink system, the frameless-style touchscreen is neatly integrated into the dashboard and features a new display that's largely impervious to fingerprints. Intellilink remains mostly intuitive to operate, but a tuning knob for the audio system would be welcome, and navigation is restricted to only the two top trim levels. Additionally, GM's ubiquitous OnStar 4G LTE is on board with a WiFi antenna that makes the car a mobile hotspot (albeit for a hefty monthly charge).

Step up from the base LaCrosse to the LaCrosse Preferred at $36,990 and your $4,000 doesn't buy much: different wheels, a power adjustable steering column, and SiriusXM satellite radio. Our advice is to either stick with the base model or bypass the Preferred to wind up with the $39,590 Essence that adds heated leather seats, headlamps that swivel with the steering wheel, and a few other goodies, or the $41,990 range-topping Premium. However, only the Premium offers automatic emergency braking and adaptive cruise control ($1,690 as part of the Driver Confidence Package) and all wheel-drive ($2,200), features we'd like to see available at lower price point. 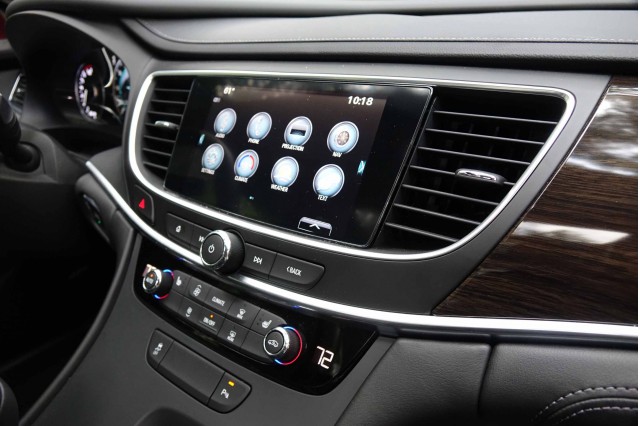 But that differentiation might be necessary to keep the LaCrosse head and shoulders ahead of the impressive Malibu. There's more design finesse and interior polish with the Buick, and we love its sonorous V-6, and smooth ride but it looks like a somewhat irrational choice when you figure a Malibu equivalent to our $41,345 photo car would run you about $8,000 less.

Then again, irrational choices are what have made Portland the hippest city in America, so maybe Buick is onto something big here.

Buick provided travel and accommodations to Internet Brands Automotive to bring you this firsthand report.